How to Start A Revolution - Shareable
Skip to content 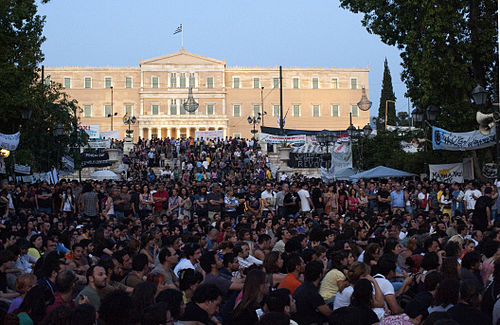 The protest camp proved a central part of the revolution in Egypt. It’s impossible to say where the movements built around the camps of Spain and Greece, which closed earlier this month, will lead, but it is totally clear that their methods are capable of transforming consciousness (particularly among millenials), radicalizing participants and making a better future seem not only possible, but plausible. Camps have sprung up all across the world, and have strengthened protest movements and community activism wherever they’ve appeared. These instructions are based on personal experience from camps in Barcelona and New York City, conversations with campers from Madrid and Madison, and research of other camps around the world.

The early stages of any camp involve intensive planning. Although the camps in Tahrir and Spain were largely improvised from the ground up, they emerged from protests that had been planned for months. The first thing to do is to hold a big protest, and bring all your friends.

Choose a date, a time (a Friday will probably be ideal), and a public space centrally located to areas of political interest and with lots of foot traffic. Focus on a local political issue that can activate the community: these camps have largely been based around austerity politics, and though they have grown to encompass larger critiques of society, begin with local issues. You’ll also need a legal advisor, or at least someone who understands protest law and public use permits. Leverage your social media networks to bring out as many people as possible: you’ll probably want at least 100 serious comrades with mixed skills and full commitment. Bring tents, sleeping bags, warm clothes, and bed rolls, because you’re going to camp out.

As the protest goes along, set up your tents, beds, etc. Prepare them in such a way that you can be there a long time. You are going to be there a long time. The first 72 hours are vital- everyone is going to need to remain until the camp is well established and the police reaction has been figured out. Revolutions don’t have sick days, but jobs do.

All major decisions need to be made by the group, not by individuals – the camp can have no representatives, and no leaders. This decision making is done by the General Assembly, a meeting-based consensus process in which ideas, proposals and decisions are all made from the ground up. I’ve written more extensively on the General Assembly method for Shareable here.

Once the camp is established, you’ll want to make it a free space, a small outpost of the better world to come. Make art, placards, performance spaces, free stores and information booths. In Spain, the camps had set up generators to run computers, wi-fi, and communication stations. In Plaza Catalunya, Indignados built tree houses, a stage, a tattoo “parlor,” a free barber shop, and much more. They “hacked” statues with masks, bandanas, and colored paint. What does your city need? How can you build it? Show the people what a free society will look like while teaching yourself how to build one.

Provide free services that the city or country is taking away, to demonstrate both what is being lost and what the people can provide eachother. In Bloombergville, New York’s protest camp, we set up a free take-one leave-one library, as the budget brought huge cuts to public library funding. Show with your actions that the people sharing their efforts and their resources can build anything.

It’s also important to stay active: it’s easy to just hang out in camp with your friends, and you’ll do plenty of this, but make sure that you’re actively participating with the community. Organize protests relevant to your situation. Connect with local organizations that are working on the same issues. Gather the neighborhood on the day of the protest and march together from your camp (leaving behind enough people to hold it). Keep action happening at the camp everyday: make documentaries, give teach-ins, throw dance parties, etc. Make it a space of expanded consciousness and spontaneous possibility.

Indignados in Spain (via wikimedia)

There are a couple key principles you’ll also want to observe to make the camp successful.

The state produces violence, the people want peace. Use civil disobedience, peaceful retaliation, and free speech, but do not employ violence or destruction. If the cops inflict violence on the campers, this will only build your support among the people and demonstrate the intentions and methods of the state.

No illegal drugs, no public drinking, don’t break the law at your camp. In the US, both the media and the law are more critical of drug use and less tolerant of improvised use of public space. The cops and the media will use any excuse to marginalize you. Don’t let them. Demonstrate how power works by making the police break the laws.

Social Media for Distribution, not Discussion

Twitter and Facebook are incredible tools for dispersing information about public meetings, protests, manifestos, articles, etc. Use the hell out of them, but don’t use them to debate tactics, plans, or ideas. They’re bad for producing concensus, and besides, it’s much easier for cops to follow a hashtag than get in your tent. And the cops will be following: At Bloombergville, an undercover cop showed up claiming to be an “agent” with MSNBC. He asked for our protest plans and to speak to the “leader” (protip: anyone asking to speak with “the leader” is a cop). Plan in person, and spread the message like wildfire over the web.

Be Anonymous: No Leaders, No Heirarchy

Leaders can be jailed, disgraced, rejected, even killed. Being anonymous keeps you from being a target of the police, and lacking an obvious symbolic leadership swells your numbers in the mind of the public. If you think a movement needs leaders, ask yourself: how far have leaders taken the people up to now?

Welcome Everyone, Listen to Everyone

You will undoubtedly get crack pots and weirdos among you: if they want the megaphone, let them speak (at least once). The people will vote against them: I saw this happen on three separate occasions in Barcelona. I also saw a group of children welcomed into a general assembly and allowed to speak to the crowd. Dealing with confrontational people will build solidarity as a group and understanding of the difficulties marginalized people face in our society. And the beauty of the camp is it allows you to practice the very thing you’re fighting for- a society in which everyone is welcomed, listened to, respected and actualized.

I hope that these methods will lead to a successful revolution: we know that they have built the groundwork for a huge movement in a short time and at little cost. On September 17th an occupation is planned for Wall St in NYC and on October 6th one begins in Washington D.C.