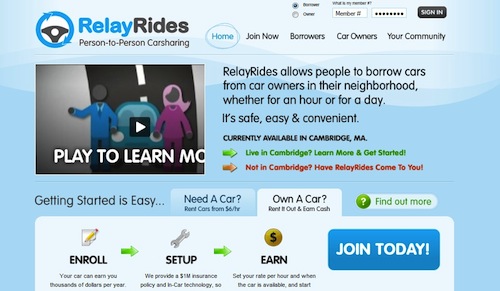 For decades, owning a car has been a status symbol, and its possession and use a private thing. Traditional car rentals cater to those who need a car temporarily, but the real problem is that the average car sits idle for 23 hours per day. While services like Zipcar offer a solution in high density areas, they require a critical mass to be successful. With peer-to-peer carsharing, RelayRides offers an efficient way for people to get more use out of their vehicles, while providing a convenient solution for those who don’t want to or can’t own their own cars.

Jobs: Christina is a Research Associate at the Harvard School of Public Health, and a musician with Chris & Meredith Thompson; Brett is the President of Homerun Hopefuls, a nonprofit organization he founded in 2002

The story: Growing up in the city of Providence, Christina Lively’s parents always set an example by encouraging their children to use public transit, instead of using a car. “I live in the city and try to walk/run/bike or take the ‘T’ as much as possible. I will challenge myself to take public transit to new places,” says Christina. As a part-time musician, she owns a car so she can transport her equipment to and from gigs, but for the rest of the time the car sits idle.

When she heard about RelayRides, an online peer-to-peer car-sharing platform based in Cambridge, she was excited by the thought of offering her rarely-used car to someone in the community who needed an occasional ride. “By sharing cars, we can reduce the number of cars in the city, while allowing people who need a car occasionally to rent one for a short time,” she says.

On a trip to a local farmer’s market, Brett Kalikow saw an advertisement for RelayRides. He immediately saw it as an opportunity to have access to a car when he needed it, without needing to cover the expenses of owning and maintaining one himself. “I was about to sign up for a similar service with Zipcar so I thought I’d give it a shot.” With a preference for Subaru Foresters, Brett now rents a car through RelayRides about twice a month, giving him the opportunity to run errands that require convenient transport.

While it may take a change in thinking to feel comfortable borrowing an unknown neighbor’s car, Brett found the concept an easy one to grasp: “I figured it was similar to renting a car from a company. If the owners of the car were comfortable lending out their car, why shouldn’t I feel comfortable driving it?”

In the same way one might clean the spare room for impending guests, Christina admits, “I’ve always been vigilant about keeping the maintenance current on the car, but now I’m also thinking more about aesthetics as well. I will admit I now keep my car much cleaner than I used to! I want it to look good for those who rent it.”

The motivation: “Rather than think of people who rent my car through RelayRides as strangers, I think of them as people in my community,” reflects Christina. She rents out her car primarily for philosophical and environmental reasons, though the financial benefits are a big bonus. “People need to change their habits,” she says. “If more people used public transit or walked for short trips and shared cars for longer trips, we might both increase use of public transit and decrease the number of cars in the city.”

From Brett’s perspective, RelayRides is “helping cash-strapped car owners maintain their cars and helping those who don’t need cars full time get transportation at minimal cost to the environment.” But underneath this basic equation, he recognizes something deeper; peer-to-peer car-sharing actually facilitates trusting relationships between neighbors.

Christina agrees that the increased sense of community created by the likes of RelayRides is fundamental, and perhaps the key to shifting attitudes toward other means of Collaborative Consumption. Apart from RelayRides, organizations such as Zilok, Rentalic and NeighborGoods are helping to turn our “idle”possessions into something that’s useful to someone else, as well as personalizing the experience of borrowing or renting things by tapping into the neighborhood network.

A shared future? It seems fitting that one of Brett’s favorite RelayRides moments so far was when he borrowed a car to go and pick up an ottoman he had sourced through his local Freecycle network. Meanwhile, Christina has started exploring ways to lend money through peer-to-peer sites to empower small business owners: “I recently donated through Kickstarter to help GuyManlyMovies, Boston-based local filmmakers, fund a film called Toothbrush.”

RelayRides assists people like Brett and Christina to get from A to B in a more economical, and less environmentally damaging, way–but it also makes a notable contribution towards changing our attitudes toward the things we own. As Christina believes, “Many people making small changes together can make big change happen.”