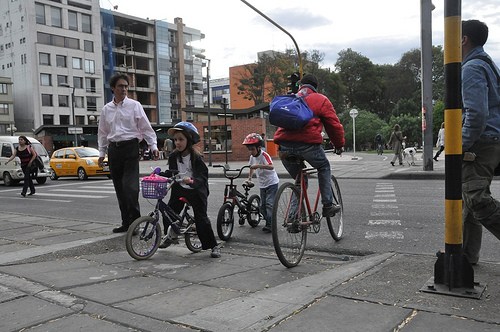 In two days, the nation will pay its taxes (better get on it!). But did you know that April 15 is also Bike to School Day?

I discovered this while writing an article for Mothering magazine about ways parents can help green their schools, due to be published in its Fall back-to-school issue. The people urging families to walk or bike to school normally frame it as a solution to rising rates of childhood obesity: Thirty years ago, reports the Center for Disease Control and Prevention, 90 percent of children who lived within a mile of school walked there. Today, that number is 25 percent. In the same period, the number of overweight or obese children has roughly tripled—two trends that the CDC claims are intimately related.

However, in the course of researching the article, I also discovered that driving private cars to school contributes significantly to global warming.

“Nationwide, it’s a big issue,” says Bridget Smith, the mother of twin five-year-old boys and a senior engineer with the San Francisco Municipal Transportation Agency. Driving to school contributes to “pollution, crowded roadways, and chaos in front of the schools with lots of people dropping off and picking up.” Many crashes occur around schools, says Smith, and it’s not uncommon for parents hit a child after dropping their own child off.

The solution? “Don’t drive,” says Smith–and help organize other parents to do the same. She and many other engineers and planners argue that one of the best things families can do for their health, their safety, and their environment is to walk or ride a bike. If walking and biking aren’t feasible, the next best thing your family can do is to take the bus or carpool to school.

Beyond the individual steps we can take, shrinking the carbon footprint of school transportation has major implications for the ways we design our cities and educational systems. Many school districts offer school choice and/or assign schools based on efforts to make them as multiracial as possible—which sounds laudable until we see the traffic jams Smith describes, as parents drive their kids to schools far from where they live.

“My personal point of view is we should have neighborhood schools just for the sake of transportation and the environment, and health,” says Smith. Does this mean that the goals of racial equity and integration are at odds with environmental sustainability? Not really. Decades of court-managed integration have made San Francisco, for example, even more segregated. A better solution, I suspect, would be to invest in all our schools and neighborhoods based on need, regardless of their racial composition.

Investing in urban education may also have the effect of keeping families in cities: Because kids are more likely to walk to school in dense urban areas, some advocates claim the quality of urban education should be seen as an environmental issue–if cities offer quality education, families will stay instead of moving to the suburbs, and they’ll be more likely to walk and less likely to drive private cars to school. That’s why Jim Heid, father of a five-year-old and principal of the sustainable development advisory firm Urban Green, calls improving the quality of public education a “game-changer for taking on climate change” that could do more to shrink a city’s carbon footprint than any other public course of action.

To start, Smith suggests that parents organize around the annual Bike to School Day (April 15, 2010) as well as Walk to School Day (next on October 5, 2011), which gives parents and kids an opportunity to try alternatives to driving. If safety is a concern, try organizing “bike buses” or “walking buses,” in which a group of bicyclists or pedestrians clump together for visibility along a specific route and timetable. Here’s a video of a group of kids in Orlando, Florida doing just that:

Looks like fun, doesn’t it? “I hear from people all the time who try it,” says Smith, “and they find it so great that it becomes a habit.” Organizing days to walk or ride to school is also an opportunity to raise awareness about the interrelated issues of global warming and obesity. What’s bad for the planet is often also bad for our bodies and our minds!

Revised from a post on my Mothering magazine blog.