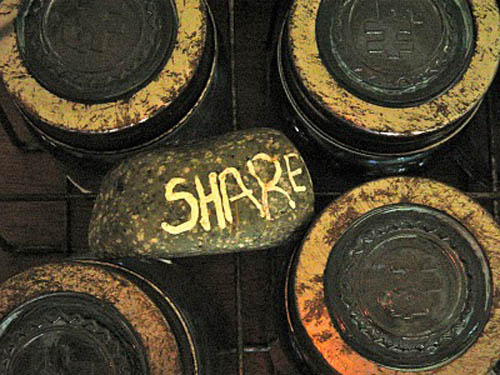 When looking through the lens of collaborative consumption or the mesh, it’s easy to see how many of our needs can be met through sharing with others to some lesser or greater degree. Surveying this communally inclined world, we find that our homes, cars, jobs, time, and more can easily be shared. Land is another asset that can and should be shared, one that is in high demand as rising food prices and the desire for healthy food blooms alongside the ‘Grow Your Own’ movement’s current momentum.

In 2009, Landshare was launched in the UK to do just that — share land. As stated on the website, “The concept is simple: to connect people who wish to grow food with landowners willing to donate spare land for cultivation.” A mere two years later, more than 60,000 people have signed up to share some 3,000 acres of land across every region of the country. At the outset, creator Hugh Fearnley-Whittingstall proclaimed it a “food revolution destined to be the next great thing.” The project, and others like it, can be credited with helping solve multiple problems with that one simple concept. Food security, carbon emissions associated with factory farming and food transport, crop diversity, community building, and more find a resolution in Landshare… and land sharing.

With the U.S. boasting its own version of Landshare with a capital L in SharedEarth, collaborative land users had some nice coverage. Then, back in March, the two organizations joined forces to become SharedEarth Globally and make it that much easier to match growers with land owners. Like Fearnley-Whittingstall, SharedEarth founder Adam Dell sees amazing potential for the model: “I think it scales all the way up to I’m gonna be a farmer, and all the way down to I have a fire escape on my building in New York, I’m growing some food and I can use some help. We’ve got a couple of gardening groups who have signed up. We’d love to get some churches. The Catholic Church is the largest landowner in America. I’d love if churches, synagogues signed up, and said ‘We’ve got land, grow stuff! We’ll donate some of the produce to our food bank.’ There are lots of iterations this can take.”

He’s absolutely right. Matchmaking between the people who own dirt and the people who want to work it comes in many shades. Having started in Seattle, Washington, Urban Garden Share now tackles the task in a number of U.S. cities, including Louisville, Kentucky and Atlanta, Georgia. The mission they have chosen to accept — pairing “together eager gardeners with eager gardens. When neighbors come together and co-operatively grow food, dirt flies and good things happen.”

Even further afield, groups like WWOOF and GrowFood connect volunteers with farmers around the world. In exchange for room and board, the workers help out on the farm, learning as they go. But, again, the ultimate goal is much loftier than that. GrowFood’s stated mission is “to help grow a community of 50 million new small-scale organic farmers. That’s how many it will take to break America’s dependency on factory food.” When combined with the various other facets of the movement, the efforts of these groups likely will make an appreciable impact.

At the WWOOFer-hosting Red Damsel Farm just outside of Victoria, British Columbia, the owners have 11.5 capacious acres and not nearly enough time or energy to cultivate them so they’ve teamed up with local land-less farmers. Of their partnering process, proprietor Clare Day said, “It’s been very organic. It started with Barb, a local, very experienced farmer who used to farm this land years ago. From there, friends and friends of friends have come across our path and we have developed the group of farmers from there.

“We have no formal agreements with any of the farmers. We provide fencing, water, and land, and in exchange ask the farmers to steward the land as if it were their own — including no chemicals, and a commitment to add back to the soil by way of mulching, compost, etc. — and for them to share a portion of their crop(s) with us.” 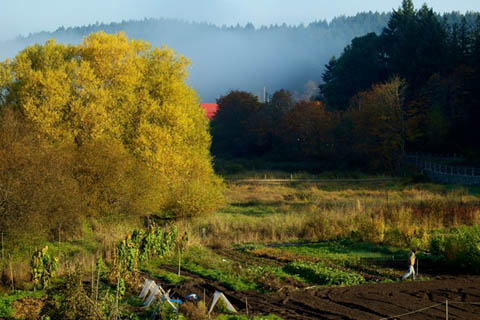 The smaller side of the scale is also incredibly accessible. Many urban areas boast community farms. Some of those cities, such as Detroit and New Orleans, lean on farms as a means to rebuild themselves. Nestled in the heart of San Francisco, the 2.2 acres of Hayes Valley Farm serve multiple urban agriculture-related functions. The farm provides an educational center, a community hub, and more. Booka Alon, one of the HVF coordinators, explained, “Space-sharing is what happens when people get creative about ‘best use’ for underutilized spaces. In our current economic climate, it might also be said, that more people are entertaining the idea of space-sharing, because the means for singular ownership or singular usage isn’t practical or possible, due to financial shortcomings.”

Hayes Valley Farm is open and accessible to everyone in the community: “People come and volunteer their time. If food is ripe and it’s a harvesting day, they are welcome to take home whatever has been harvested. These days, it’s arugula, borage, fava beans, cape gooseberries, and lots of kale, chard, and lettuce greens. For their time, we offer them whatever food is available. They are also encouraged to take home calendula seeds, and seeds of other flowering plants that are maturing and dried.”

HVF hosts volunteer days on Sundays, Wednesdays, and Thursdays for people in the neighborhood looking to play in the dirt. They also educate people, sharing a bounty of wisdom along with the bounty of produce. Alon said, “We also have additional classes for urban farmers who want to know more about seed saving, urban permaculture, honey beekeeping, and other areas of sustainable energy usage and urban homesteading. We never turn anyone away for lack of funds, and welcome work-trade options for those who would like to participate in ‘getting dirty’ in exchange for the education opportunities.”

It might be obvious to state, but community farming isn’t just for city dwellers. Participating with a local farm can happen pretty much anywhere. To help find a farm near you, Local Harvest offers a convenient community-supported agriculture (CSA) search tool on their website. Peruse the results, make some calls, and find a farm that welcomes volunteers. In Ojai, California, Rio Gozo Farm echoes Hayes Valley and offers a common barter with volunteers — come help harvest and get a free box of produce. And, like Red Damsel, they also share their 17 acres with others, including the Ojai Valley Green Coalition. Farmer Elizabeth Del Negro feels that volunteers mean “everything” to a farm. She elaborated, “We can’t do it without our community. Farms require either community or a very large family. They don’t happen by one person alone.”

For their part, the helpers have myriad reasons for pitching in. Eleven-year-old Zane enjoys “learning about different vegetables and when they are ready to be picked. And picking is fun.” For Amber Nelson of Ventura Locavore, it’s all about community: “It’s important to me to be able to look my farmer/food provider in the eye and say thank you. The relationships that have developed as a result of volunteering on the farm are priceless.” 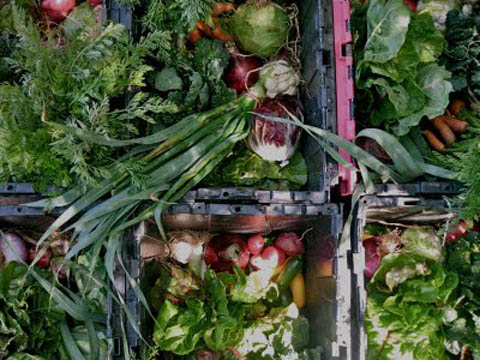 The moral of the story is this — sharing land is simple, fun, and incredibly rewarding. To get started, take one of two very easy routes:

No matter which row you choose to hoe, SharedEarth offers some practical, universally applicable advice to create a garden share plan with your cohorts that outlines what, where, and how much you’ll plant along with cost, labor, and yield splits. Communication is the key, here. Make sure all parties understand all of the various expectations and are in agreement. The site concludes with, “Once you get going, a good rule of (green) thumb (and a good life rule in general) is to respect others, act in kindness, and be mindful of others’ space and knowledge. Gardeners, be mindful of time and space as you enter another person’s home. Land owners, be respectful of the experience and passion of those who are willing to give their time and skill to enrich you life and landscape.”

As do most involved in the push toward a more shareable and sustainable world, SharedEarth’s Adam Dell dreams big: “I think SharedEarth is something that can be big and meaningful in its impact. It could be a global thing. Just imagine if we had 10 million acres of producing farmland. That would produce a lot of oxygen and consume a lot of CO2. It would generate a lot of interesting stories and a lot of interesting community connections and a lot of time well-spent cultivating the land.”

For the UK:
WWOOF UK
Landshare