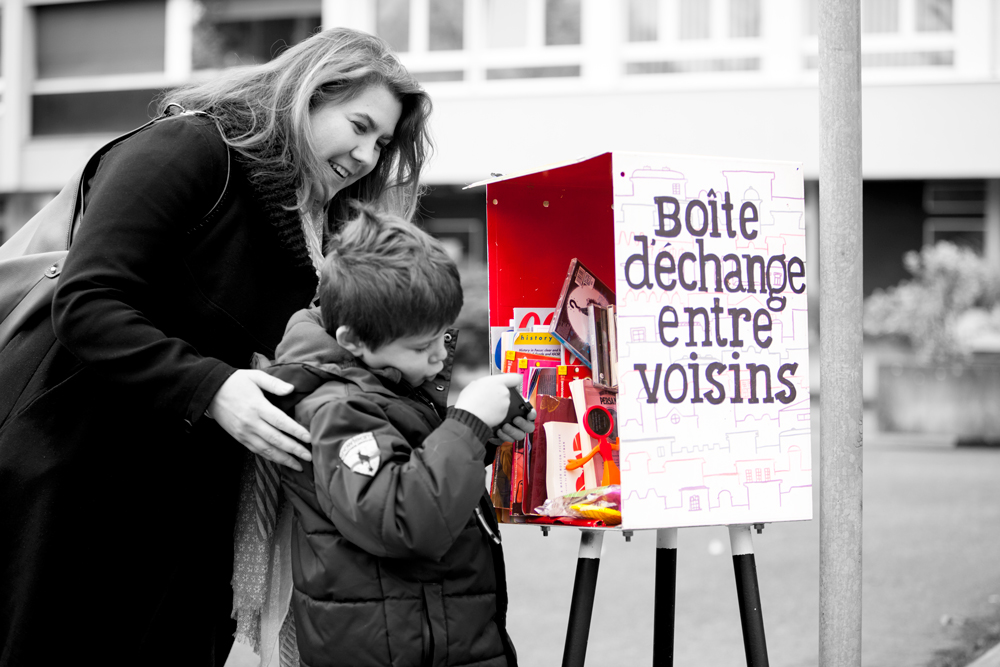 Dan Acher and his collaborators at Happy City Lab created this handy guide to setting up your own Neighborhood Exchange Box (for exchanging used goods with neighbors) which you can do in four easy steps: 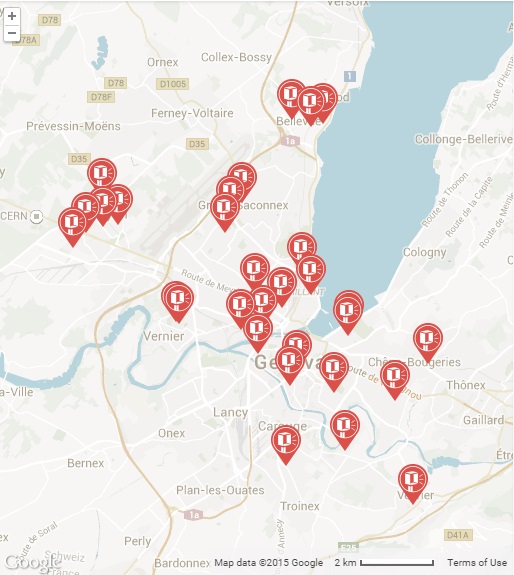 The most important aspect of the box is location. Acher recommends a quiet residential area, preferably a place with apartments rather than houses, away from both busy thoroughfares and, especially, areas with bars or rowdy nightlife. A box in a heavily trafficked area can become a dumping ground — empty beer bottles could crowd the box on weekends. Another reason to put a box in a slightly out-of-the-way location is to make the box itself a destination. Visitors may want time and space to look through the box. A shady corner on a quiet side street helps create a more intimate experience. Over time, locals may re-route their traffic to pass by "their" box, creating a new place to interact in their neighborhood — as Acher puts it, making a "non-place" into a social hub and giving the box a life of its own. But as with any social experiment, it can be changed to best fit people's needs. Acher says, "If a spot doesn’t work very well, you can simply move the box to another spot in the neighborhood. Simple as that."

The Happy City Lab guide indicates the ideal size for an exchange box is about the dimensions of a pay phone booth: 30 by 43 by 44 centimeters, roughly a foot deep and a foot-and-a-half wide and high. Many of the boxes sit on three legs fashioned like a tripod, so the box has the overall effect of an over-sized daguerreotype camera. Acher says the first box was an old newspaper dispenser and "almost instantly the box was adopted by the inhabitants of the nearby buildings. We found a large stock of old [newspaper] boxes that we could buy so that’s how it started." Because they have a uniform size, they encourage people to exchange small objects, rather than dump large items at the exchange site. Another advantage to their size and shape, Acher says, is that this style of box is common in Switzerland, so it's easier to get them accepted by local authorities.

Every box should be secured to a sturdy public fixture, like a light pole or street sign — the kinds of places that would be good for locking up a bike. Chain the leg of the box to the fixture so it's out of the way but also securely fastened. Also, it should be placed downwind and underneath an awning if possible. Many of the Swiss outdoor boxes have a clear plastic door or window covering the opening, to protect its contents from harsh weather. Acher says that each box should be sponsored (especially in its initial stages) and okayed by the local community, so if there is a problem with the box, they know who to contact. 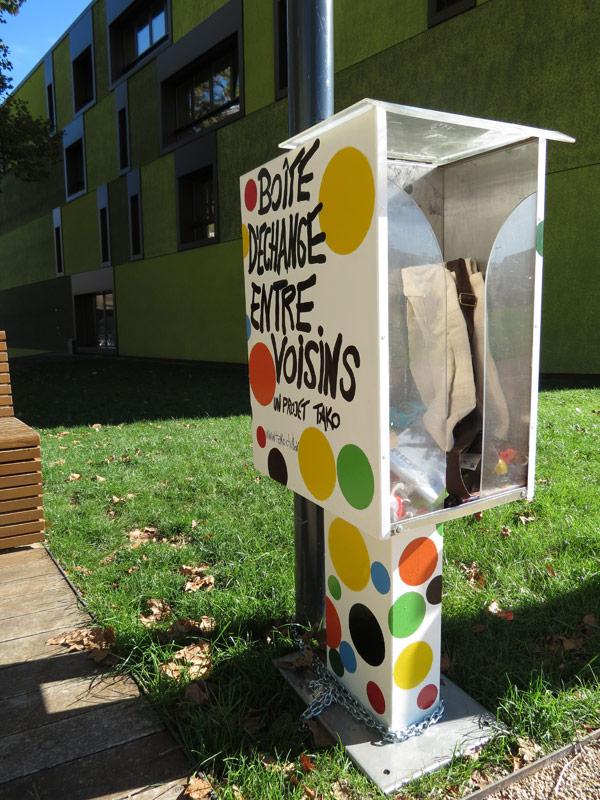 Enlist local groups like a neighborhood association or library to help host a design contest. The community input will help the box become a part of the neighborhood's fabric much more easily and gives locals ownership of it and its contents. Designs can be centered around the themes of the project: creativity, exchange, community, teamwork, recycling, reuse, or city pride. Weed out submissions that may not be family friendly or don't communicate the messages behind the project. Once a design is chosen, it can be printed on durable UV-resistant stickers so the design will stay vibrant in all kinds of weather. Acher encourages organizers to respect copyright and get the chosen artist to sign a release to use photos of the box. Then host an inaugration party where the artist cuts the opening ribbon.

Become an ambassador, drum up support for the project, and find a long-term sponsor (or become one yourself) to encourage responsible use of the box. To stock the box for its debut, solicit items from neighbors and watch them stop by to see if their objects have been taken. At first, it may empty out quickly. Acher says that in some areas, "People in need might be too keen. Don’t worry. People will put more stuff soon." The sponsor can selectively deploy a small back stock of items to keep a regular rotation of certain things that tend to pile up — if someone drops off a stack of textbooks, take all but one and replace it with another textbook once the original one disappears. Visitors will appreciate the variety.

Bonus: Bring it to work! 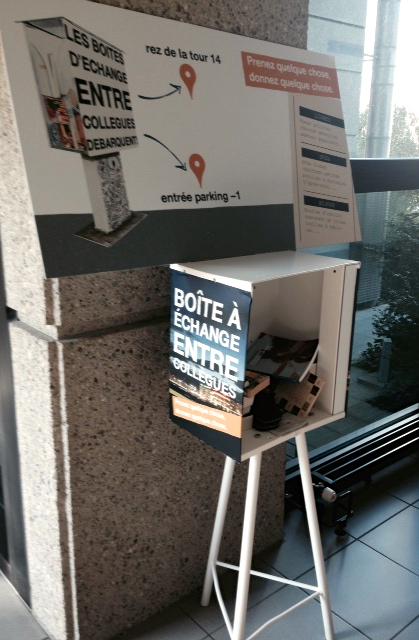 Acher says the first workplace exchange boxes were installed at SIG, a Swiss utilities company focused on sustainability and clean energy. Its Geneva location set up two boxes in its building, one in an office tower and another near a parking garage so people would see it coming to and from work. Each had a large sign announcing its arrival with the invitation to "Take Something. Leave Something."

Acher says Happy City Lab wants to see more of these — both across Europe and the world — so if you create a box, post a photo of it on Twitter with the hashtag #hclbox so they can add yours to the growing network of exchange boxes.