How to (Legally) Open a Gift (Economy) - Shareable
Skip to content 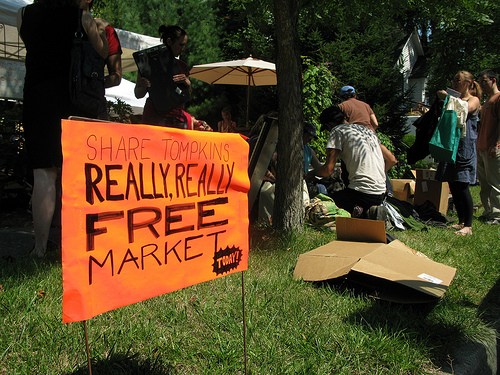 In part one of this series, “How to Barter, Give, and Get Stuff,” attorney Janelle Orsi explores the legal ramifications of “third economy” transactions that happen without money, through barter, gifting, time banks, and other creative means. Now in part two, she delves more deeply into the nuts and bolts of the gift economy. In part three, Janelle tells you how to start bartering.

Giving and receiving gifts is the simplest way to get started in informal economy, because giving is something we all do naturally and instinctively. When we consciously take gifting to new levels, our local economies and communities will thrive in new ways. As described in part one of this series, a gift economy could begin with something as simple as a regular dinner party among friends, and it could grow to become a significant way in which we meet our needs.

So how might you get started? One way is to simply let your friends know you are exploring a gift-based economy, and tell people what you need and what you have to offer. Feeding people is a particularly good way to get it started, because sharing a meal builds connections among people. Don’t ask people to pay you back, but do encourage them to pay it forward! Starting or joining a gift circle is another way to get started, and I recommend reading Alpha Lo’s writings on gift circles. 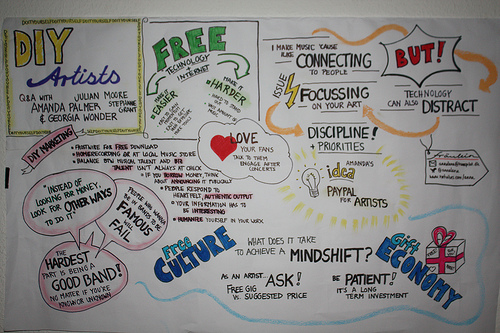 True gifts are largely unregulated and untaxed. As a general rule, gifts we receive do not need to be reported as part of gross income (See 26 USCS § 102). However, the law defines “gift” in a particular way. Many things we receive, such as employee bonuses, may feel like “gifts.” Yet, sometimes employee bonuses meet the legal definition of a gift, and, other times, they do not. The difference turns on a handful of factors.

Unwrapping the [Definition of] Gift

To help us delve deeper into the definition of a gift (specifically regarding the Internal Revenue Code Section 102 definition), the U.S. Supreme Court has given us some guidance, best summed up in Commissioner v. Duberstein 363 U.S. 278, 285 (1960). Here are some quotes from the Supreme Court, along with my own summaries in bold:

As legal standards go, this one is particularly fuzzy and touchy-feely. If the authenticity of a gift is ever questioned by the IRS, a judge or jury must attempt to gain insight into the thoughts and feelings of the giver, to guess at their motives and intention. They would have to rely on vague criteria, such as the existence of a friendship, the non-existence of a business relationship, and other quasi-objective factors to guess at what the giver was feeling. If our gift economies ever go to trial, it will at least be interesting!

Even with the clues the Court has given us, the concept of a “gift” is still somewhat unwieldy. Let’s see how this could play out: For years, I make soup for my elderly neighbor, simply as a kind gesture. Then, I go through a rough financial time after setting my kitchen on fire. My neighbor, who just received a large inheritance, gives me $2000 to help out. These gestures do seem to arise from pure generosity and charity, so hopefully I wouldn’t have to include the $2000 in my income.

But what if, absent financial troubles on my part, she gave me the check and said, “The soup has been so helpful to me over the years, but I’ve never been able to return the favor. I feel I should compensate you somehow!” Hmmm. Now is she giving me money out of a feeling of obligation? Does that mean the $2000 is income to me? Probably.

Since the circumstances and intentions surrounding every gift could vary, the safest thing to do is to independently analyze every gift you receive to determine whether it should be included in your reported income. Think about the criteria listed above, and about the intention of the person from whom you received the gift. If it appears that a gift you are receiving comes as payment for something you have done or will do in the future, you should probably report it as income.

In the next entry in this series, I examine the legal issues surrounding barter, and give some tips for getting started. 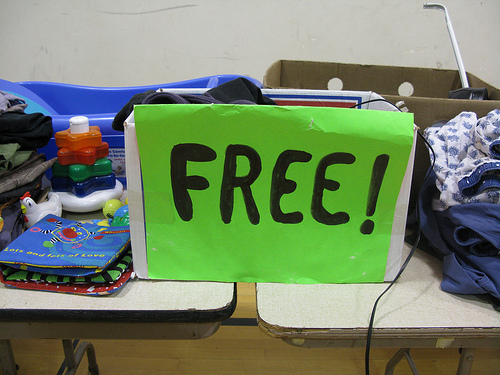 This series is an attempt to give readers at least some sense of orientation in relatively unsettled or uncharted legal territories. When legal definitions are unsettled, the best that we can do is 1) gain as much understanding as we can, by reading laws, regulations, tax rulings, and court cases, and 2) based on that information, make good faith and reasonable determinations about how to classify our activities. Sometimes, you may get the answer wrong, which means dealing with the consequences when the IRS, Department of Labor, or other agencies come calling. It’s up to you to decide what risks are worth taking.

Please keep in mind that the information in this article is not legal advice. Legal information is not the same as legal advice, which is tailored to an individual's specific circumstances and relies on the lawyer knowing all the relevant facts.