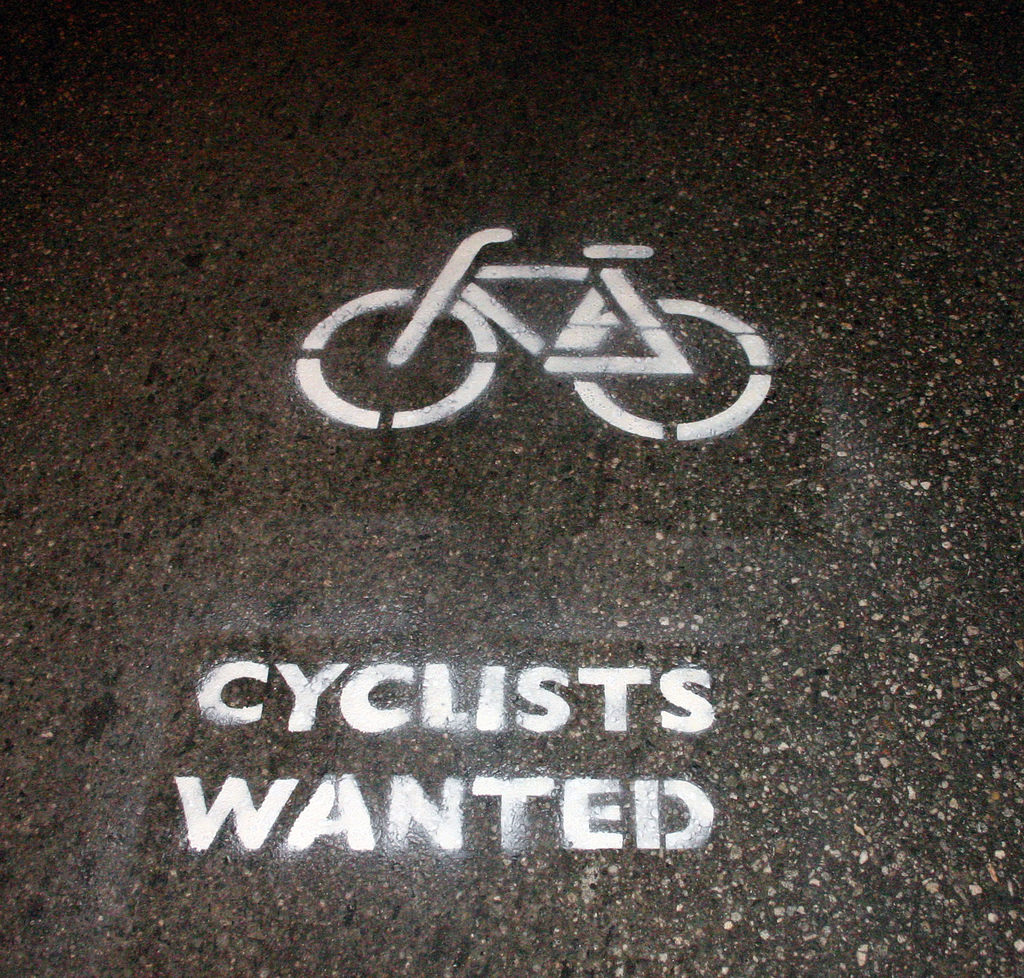 You can see big changes happening across America as communities from Fairbanks to St. Petersburg transform their streets into appealing places for people, not just cars and trucks.

“Over the past five years we’re seeing an infrastructure revolution, a rethinking of our streets to accommodate more users — busways, public plazas, space for pedestrians, and, of course, bike lanes,” says David Vega-Barachowitz of the National Association of City Transportation Officials. “More protected bike lanes is one of the most important parts of this.”

Protected bike lanes separate people on bikes from rushing traffic with concrete curbs, plastic bollards, or other means — and sometimes offer additional safety measures such as special bike traffic lights and painted crossings at intersections. Protected bike lanes help riders feel less exposed to danger, and are also appreciated by drivers and pedestrians, who know where to expect bicycles. Streets work better when everyone has a clearly defined space.

The Continuing Evolution of Bicycling

Protected bike lanes are standard practice in the Netherlands, where 27 percent of all trips throughout the country are made on bicycles. That’s because more women, kids and seniors along with out-of-shape, inexperienced riders feel comfortable biking on the streets. Dutch bike ridership has doubled since the 1980s, when protected bike lanes began to be built in large numbers.

American communities, by contrast, paint bike lanes on the street, often squeezed between parked cars and busy traffic. With just a white line dividing bicyclists from vehicles, it’s no surprise that only a small percentage of Americans currently bike for transportation.

“Conventional bike lanes have not worked well to get new people on bikes — they serve mostly those already biking,” says Martha Roskowski, vice president of local innovation for PeopleForBikes. “It’s time to evolve the bike lane.”

Nearly two-thirds of Americans would bicycle more if they felt safer on the streets, reports the Federal Highway Administration. Protected bike lanes, along with public bike share systems, are two of the best ways to get more people out on bikes, according to a growing chorus of transportation leaders.

Protected laneshave recently popped up in more than 30 communities across the U.S. from Munhall, Pennsylvania, to Temple City, California, with many additional projects set to open later this year.

New York’s first protected lanes provoked fierce opposition from a few people, but Paul White of the local bike and pedestrian advocacy group Transportation Alternative says the public debate has now shifted to “Where’s mine? How come that neighborhood has safe streets and we don’t — don’t my kids matter as much as theirs?”

Chicago aims to catch up with New York, and has recently opened 23 miles of protected lanes. San Francisco has built 12 miles so far. “Wherever we can, we try to put in protected bike lanes,” stresses Seleta Reynolds, former Section Leader of the San Francisco Municipal Transportation Agency who oversaw installation of many of San Francisco’s protected bike lanes. Reynolds was recently tapped by Los Angeles Mayor Eric Garcetti to head the City’s Department of Transportation. 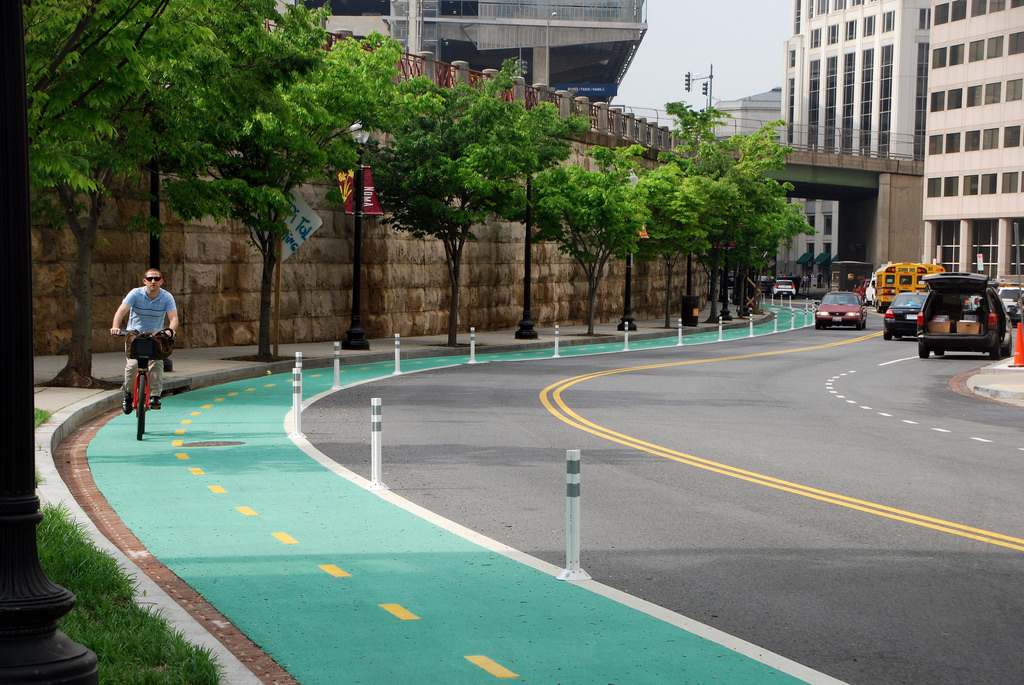 Other leaders in the field are Austin, Texas, with nine miles and Washington, DC, with seven miles, including a highly visible route down Pennsylvania Avenue leading to the U.S. Capitol, which has tripled the number of people riding bikes on the street. More protected bike lanes are planned or under construction in all of these cities.

This year more than 100 cities submitted proposals to PeopleForBikes to be part of the Green Lane Project, a competitive fellowship which offers cities financial, strategic and technical assistance valued at $250,000 per city to build or expand protected bike networks during a two-year period. Atlanta, Boston, Denver, Indianapolis, Pittsburgh, and Seattle were selected in March to be the second round of Green Lane Project cities.

Just released research on protected bike lanes in five of the first-round Green Lane Project cities (Chicago, San Francisco, Austin, Washington, DC, and Portland) shows why so many communities are eager to follow their lead. The federal Department of Transportation-funded study found an increase of ridership from 21 to 142 percent on streets featuring protected lanes in the first year, with an average increase of 75 percent. Meanwhile evaluation of protected bike lanes by the city of New York found that traffic injuries declined for all road users (not just bicyclists) by an average of 40 percent.

Beyond the White Stripe

What about the conventional bike lanes painted on the pavement — that simple white stripe we’ve grown used to? “They are the camel’s nose in the tent for growing bike use,” because they legitimize bicycling as transportation in the eyes of prospective riders and remind motorists to share the road, says Randy Neufeld, director of the SRAM Cycling Fund.

“Conventional bike lanes can work very well on a two-lane street with light traffic and slow speeds,” notes Roskowski. “But they are not enough for busy streets and fast traffic, which need an extra degree of separation between bicycles and motor vehicles.”

That’s the logic embraced by Dutch traffic engineers, which has doubled the number of bicyclists in the Netherlands. According to the Dutch Design Manual for Bicycle Traffic, physical separation of bicyclists from motor vehicles is recommended for any urban street with more than two lanes or where the speed limit exceeds 50 km per hour (31 mph).

One problem with conventional bike lanes is that they raise expectations beyond what they can deliver. “Cities all over the country painted stripes on busy streets, and when these lanes attract only a modest increase in bicyclists, city officials conclude there is only limited interest in bicycling,” notes PeopleForBikes president Tim Blumenthal. “A lot of people just won’t venture out on busy roads without a greater level of protection from traffic. That’s where protected bike lanes come in.”

“We are at a turning point in how we think about bikes,” explains Roskowksi. “This change is being driven by cities preparing for the future. Mayors, elected officials, business leaders and citizens want their cities to be resilient, sustainable and attractive, and they realize bikes and protected bike lanes can help achieve that. These new bike lanes make the streets safer for everyone and improve city life for people who will never even get on a bike.”

Here are key benefits of protected bike lanes enjoyed by the entire community:

Attract and Keep a Talented Workforce: Richard Florida, originator of the Creative Class strategy for urban prosperity, contends that safe, convenient bike lanes are important to communities that want to attract entrepreneurs and sought-after workers in creative fields–not just young hipsters, but those with kids too. “Traffic-free bike paths become especially important to them,” Florida said about young families in the New York Daily News.

Expand Economic Opportunities: Chicago mayor Rahm Emanuel vowed to build 100 miles of protected bike lanes in his first term as part of a strategy to attract high-tech firms to the city. In Austin, Texas, Cirrus Logic, a computer company, moved from the suburbs to downtown two years ago because the area’s bike trails and plans for protected lanes made the firm “more attractive as an employer,” explains PR director Bill Schnell. “We can’t just pluck anybody for our jobs. The people we want are mostly younger, and biking is part of the equation for them.” 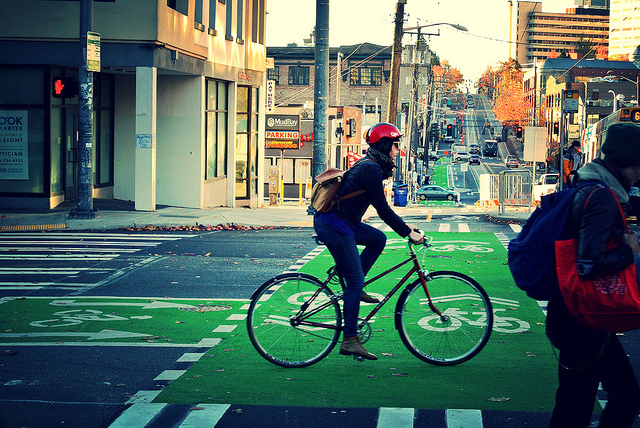 Boost Local Businesses: A study of protected bike lanes on 9th Avenue in New York City showed a 49 percent increase in retail sales at businesses on the street. Another study in San Francisco found 65 percent of merchants on Valencia Street reporting that protected bike lanes were good for business. A study done in Portland shows that customers arriving on bike buy 24 percent more at local businesses than those who drive.

Make the Streets Safer for Everyone: Not only are fewer bicyclists involved in accidents on streets with protected lanes, but pedestrians and motorists are safer, too. A study of Columbus Avenue in New York City after protected bike lanes were added found a 34 percent decline in overall crashes.

Reduce Tension Between Bicyclists and Motorists: “If you actually give bicyclists a designated place in the road, they behave in a way that’s more conducive for everyone getting along,” explains Jim Merrell, campaign manager for the Chicago’s Active Transportation Alliance. He points to recent findings that bicyclists stop for red lights 161 percent more often at special bike signals on the city’s new Dearborn Avenue protected lanes. And a study of protected lanes on Chicago’s Kinzie Street shows that half of cyclists report improved motorist behavior on the street.

Decrease Pollution & Curb Climate Change: A person traveling four miles to work and four miles back on a bike every day instead of a car means 2,000 pounds less carbon each year (which translates to a five percent reduction, downsizing the average Americans’ carbon footprint), as well as reductions in other pollutants fouling our air, according the Worldwatch Institute.

Jay Walljasper writes, speaks and consults about how to improve our communities. The author of the Great Neighborhood Book, he lives in Minneapolis.