How to Improve Bike Signage - Shareable
Skip to content 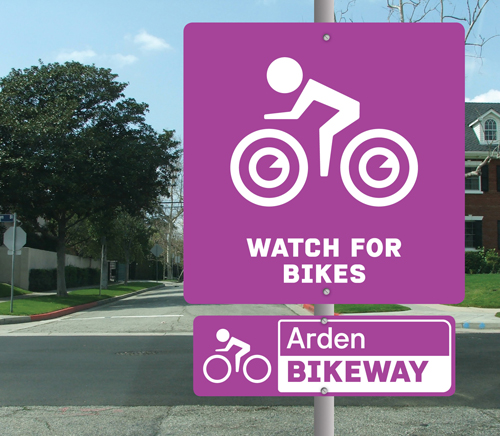 The “Better Bikeways” series originally appeared on the website of GOOD magazine, a collaboration of individuals, businesses, and nonprofits pushing the world forward.

The idea that Los Angeles is a car town is a generally agreed-upon truism that few Angelenos would think to dispute. In the popular imagination the act of driving is what defines the city. As the British architectural critic Reyner Banham once famously said “I learned to drive in order to read Los Angeles in the original.” While such a comment is not without warrant, a strictly auto-centric understanding of Los Angeles leaves out a lot.

Despite its reputation as a gridlock-bound driver’s nightmare, Los Angeles is home to a large, diverse, and ever-growing population of cyclists. With year-round pleasant weather, mostly-flat terrain, and an easily-navigable street grid, Los Anegeles is in many ways ideally suited to cycling. As someone who’s lived and biked in Los Angeles for years, I still find it disheartening to hear the horror expressed by some Angelenos at the idea of riding a bike in our city. “You ride your bike in L.A.? Are you insane?” 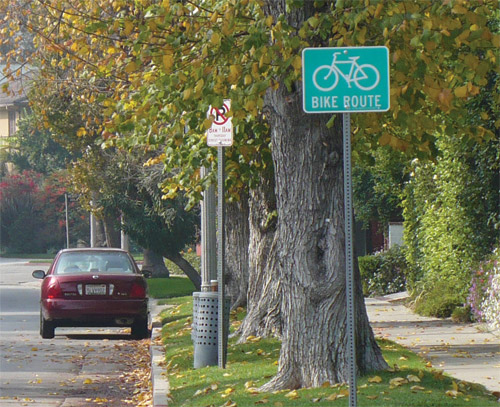 The pitfalls of cycling in Los Angeles are, of course, real, if sometimes overstated. Distracted or aggressive drivers, pothole-strewn streets, and insufficient (or just plain non-existent signage) are all realities that L.A. cyclists must learn to cope with. While many experienced cyclists become inured to these hurdles over time, they still stand as powerful barriers of entry to those considering taking up biking as a mode of transportation.

In 2005 my wife and I spent a couple months biking the Pacific Coast, riding from Vancouver to Ventura. Spending weeks in the saddle passing through locales both bike-friendly (Portland, for instance) and not-so friendly (too numerous to list here) gave me an interesting overview of the current state of urban bike route infrastructure. Inevitably during our long hours on the road I started to wonder what could be done to improve bike route planning. 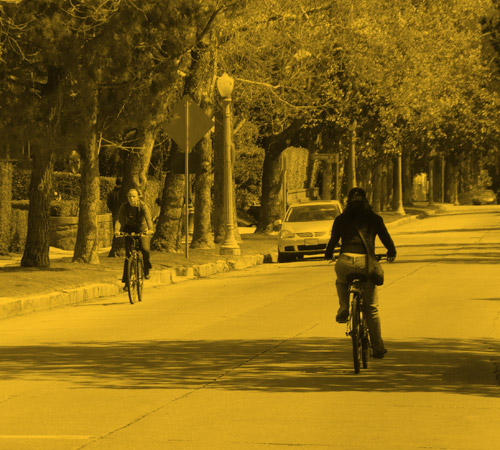 As a graphic designer I naturally gravitated towards the somewhat overlooked issue of signage. Although signs, even well designed ones, are no substitute for physical road improvements (dedicated bike lanes, sharrows, and the like) they can play an important function in improving the experience of urban biking. Effective signage not only heightens drivers’ awareness of cyclists, it can offer bikers navigational information, and even serve as an enticement in convincing people to take up cycling.

Ray Bradbury, a long-time Angeleno who famously eschewed driving, once said of public transportation in our city “it’s no use building it unless we dramatize it enough to make people use it.”

The same principle applies to bike routes. Signage must not only be functional but attractive if we are to hope to lure people from their cars and onto two wheels. The fact that signage is a comparatively cheap and easy solution to implement is also part of its appeal.

To be successful, bike signage must at minimum accomplish two tasks: make motorists mindful of the presence and rights of cyclists, and provide useful route information to the cyclists themselves. Most current bike signage takes on the first problem (with decidedly mixed results) and all but ignores the second. When compared to signage aimed solely at motorists, freeway signs for instance, the failings of most current bike signage becomes glaringly apparent. 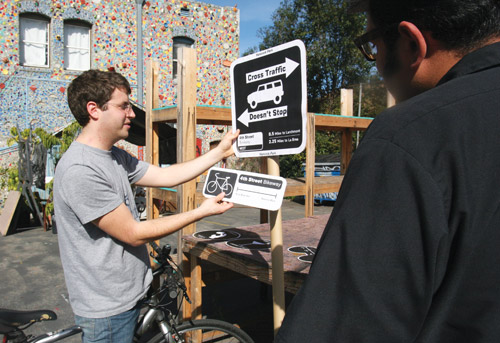 The Better Bikeways project is an attempt to address these shortcomings. From its beginnings as a graduate research project this signage system has been developed and expanded through a process of design, testing, and community workshops which drew upon the expertise of Los Angeles’ local biking community. Employing a simple yet comprehensive visual language, the Better Bikeways system is an attempt to communicate vital information and warnings to cyclists and motorists alike.

The system was designed with the goals of easy legibility and comprehension in mind and is focused on four categories of information. 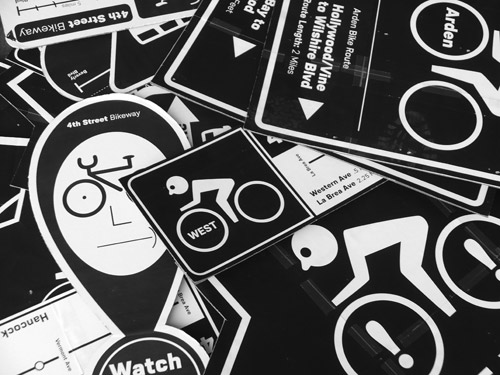 It’s easy of course to become enamored of a concept like this in the abstract, but I knew that in order for the system to be effective it would be necessary to consider specific on-the-ground conditions. What information needed to be communicated and how should the signage relate to its environment? A test case was necessary and I had just the location in mind.

Next: How to Turn a City Street Into a Bike Corridor

Joseph Prichard is a Los Angeles based freelance designer, typographer, and bon vivant. His practice includes design for print, environmental and web applications. Mr. Prichard holds a BFA in Film

Joseph Prichard is a Los Angeles based freelance designer, typographer, and bon vivant. His practice includes design for print, environmental and web applications. Mr. Prichard holds a BFA in Film from the USC School of Cinema/Television and an MFA in Graphic Design from the California Institute of the Arts. His work has been shown at the California Institute of the Arts, York University & Rodan vs Griffith and featured in publications such as Monocle, Fast Company, the Montreal Gazette & Mammut magazine.