How to Host a Cash Mob - Shareable
Skip to content 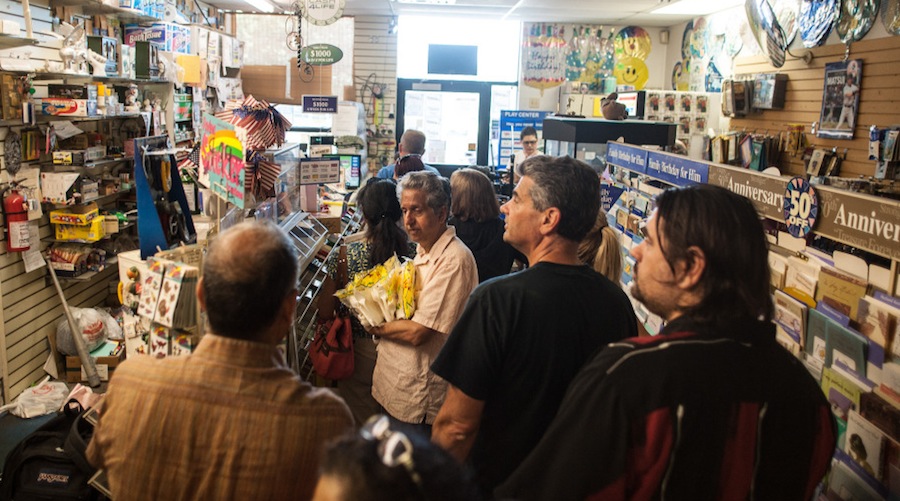 Cash mobs are a great way to boost local business and bring community together while you’re at it. The idea is simple: a group of people flood a store and pledge to buy stuff. Think flash mob but instead of dancing, you’re spending money to help give back to the local economy.

The concept of a cash mob first began in Buffalo, New York in 2011 when blogger Chris Smith got a group of people together at a wine shop. Since then, hundreds of cash mobs have popped up all over the world. In June, my husband and I organized one for our good friend Avi who owns a stationery store in my hometown of Levittown, New York.

Like many small businesses on Long Island and across the U.S., Avi’s store had come upon hard times and he was likely going to shut it down. We saw this as an opportunity to show just how loved and supported he was in Levittown and, in the process, hopefully give him some extra cash.

About 100 people showed up to help clear some items off Avi's dusty shelves. The result was almost $1,000 more in his cash register that day, renewed hope for Avi, and the following short documentary.

Our not-so-secret goal for organizing the cash mob was that it would also inspire others to do the same. If you’re keen on organizing a cash mob for a beloved local store owner, here are some things to keep in mind:

1. Make sure a cash mob is something they’d be comfortable with.

I didn’t know if Avi would hate or love it, or if there were cultural mores I should be aware of. The last thing I wanted to do was embarrass him or make him mad. So I made sure to get the go-ahead from his wife Bharati first before doing anything.

2. Start outreach at least one month out…

The success of this event depended entirely on people showing up. Since it was summer and people have lots of plans, I wanted to make sure people could pencil the date in. The very first thing I did was create a Facebook page where I could post updates and reminders.

Via the Facebook page, I invited everyone I’d ever known in Levittown and asked (read: begged) friends and family to share it with their networks. The invite list instantly tripled.

I then reached out to the local paper, The Levittown Tribune, to place a mysterious ad and also contacted someone at the Levittown Historical Society I know to send an email to various groups and associations around town.

Avi also helped get the word out. Under the guise of me wanting to interview his elderly customers for a book about Levittown, he unwittingly got me their phone numbers. Two weeks prior, I sent them a flyer via snail mail. I also had a friend deliver that same flyer to the houses immediately surrounding the store.

4. Don’t be shy about enlisting the help of family and friends.

I found people were more than willing to be a part of such a happy, community-oriented event if you only asked.

I had an editor friend proofread my copy for both Facebook and emails, friends who run an event business meet with me to talk through logistics and decorations, a web designer friend create the flyer, my sister and cousins help set up, etc.

I wanted to make this extra special so I had a “Levittown Loves Avi” sign made in the NY font from Etsy, provided food from a well-known and loved deli next door as a thank you for the people who participated, and asked my uncle to bring flowers for Bharati from his florist shop.

We wrote out a cue-to-cue, a method stolen from the theatre world, that gave a minute by minute run down of the day of and who was doing what. Of course, it didn’t go exactly as planned. (The bright sun shining down on a table full of deli meat could only end badly for everyone, for example.) But nothing was too difficult and we adjusted as necessary.

7. Think beyond the day.

Encouraged by our video producers, we set up an “Everyone Loves Avi” Fundly account (also our hashtag for the day) so we could keep the momentum up long after the event ended.

The goal of this was to help Avi restock his inventory if he stayed open or set up a mini-retirement fund if he had to close. We've raised over $16,000 within a matter a weeks, and sparked the idea that this was possible for small businesses anywhere.

Wherever you may be in the world, there’s a good chance that there’s someone you interact with on a daily basis who goes above and beyond—whether it’s the guy who knows your coffee order the second you walk in the door, or the saleswoman who always gives you an extra big smile when you’re checking out.

By day, Celeste Hamilton Dennis is an editor at the nonprofit Idealist.org, a global clearinghouse of opportunities for action. By night, she's a fiction writer currently at work on

By day, Celeste Hamilton Dennis is an editor at the nonprofit Idealist.org, a global clearinghouse of opportunities for action. By night, she's a fiction writer currently at work on a book of linked short stories.

When she's not scribbling in tiny notebooks or ravaging her local library, she dreams of dancing her way around the world.