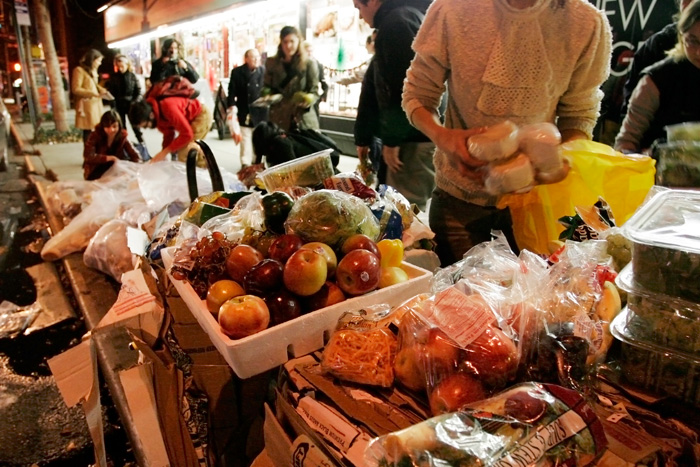 According to a report by the National Resources Defense Council, the United States throws away a staggering 40% of the food it produces every year. There are a number of culprits for this: restaurants and bakeries which throw away what’s left uneaten or isn’t sold, people who buy more groceries than they can use (you know who you are), food distributors who throw out whole pallets when things go bad in transit. But one of the major reasons we produce so much food waste is supermarkets.

While the supermarket may feel like a natural way to distribute food, it is, in fact, relatively new. While supermarkets appear as early as the 1920s, their rise to prominence coincided with the rapid growth of suburbia starting in the 1950s. Like suburban organization, the supermarket puts a premium on appearance, convenience, and profit and is not designed for ecological or human-scale concerns. As a result, the supermarket we know and love, with heaping piles of fresh veggies, mountains of meat, and miles of baked goods is one of the most pernicious producers of food waste in our country. 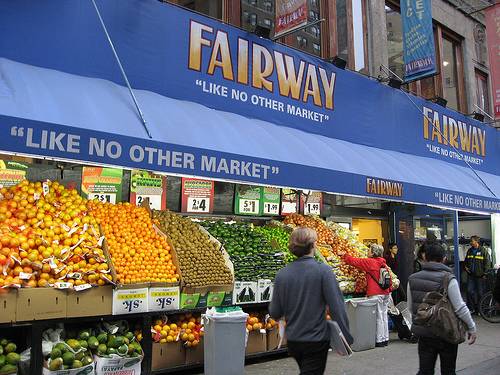 Because supermarkets have to maintain an appealing store, slightly bruised fruit is thrown out. If an orange goes bad in a five-pound bag, the whole bag gets thrown away, and probably a couple of bags surrounding it, just in case. If an egg breaks in a carton, it’s in the trash, because they’ll never be able to sell it. And if some yolk drips down the side onto a whole tray of eggs? In the garbage.

While this waste is a tremendous problem, especially when we live in a country and a world with widespread starvation, it also means that perfectly good food fills supermarket dumpsters every day. With a little bit of effort, you can make sure at least some of that waste goes to use, and save yourself a lot of money in the process. With food prices on the rise, it can make a huge difference to your budget. Dumpster diving is an easy and often fun way to do your grocery shopping, and, believe it or not, I eat healthier when I dumpster: so many fresh vegetables and fruit are thrown out every day that you can eat like a king for free. How do you get started?

Decide you want to dumpster dive

Perhaps the hardest thing about dumpster diving is overcoming the stigma that comes with rooting through the trash. Our culture associates that behavior with poverty, and poverty with shame, and there is a strong cultural bias against dumpster diving. But that’s all it is: dumpster diving is completely one hundred percent legal. If you live with roommates, discuss with them how you want to do it. Dumpster diving is great for communal meals because you can get a really big haul of food for free.

Choose a supermarket to dumpster dive

The next step is choosing a supermarket. Some supermarkets will be inaccessible because they throw their garbage away in locked dumpsters, or behind fences: this is easily checked by walking around the supermarket. If you know anyone who dumpster dives (and you’d be surprised, you might very well) they will know what supermarkets are good to go to, but generally any medium or large supermarket will throw out enough food to make it worth your while: you’ll also learn, over time, which markets are the best. Bakeries are also always a good bet: they throw out their bread every day, so you can usually get fresh bread any time.

The next thing you need to know is when they throw out their food: since most markets schedule private carting companies to take away their trash, food is usually only on the street for a couple of hours. To find out when they throw it out, you can ask a friend who dumpster dives, or wait around one night to find out. (Garbage often, but not always, goes out between an hour before and an hour after closing). Of course, if you’re feeling bold, you can just go into the store and ask an employee – usually, they’ll be glad to tell you.

Once you know where you’re going to go, and when, pick a day where you don’t have anything later on the evening. Dumpster diving can often be a late-night excursion, especially since you’ll have to take everything back home and wash it. It’s good to get a couple of large bags ready (you won’t be taking a whole bag out of the dumpster) and some plastic gloves if you don’t enjoy getting your hands sticky. It’s a good idea to bring a flashlight or a camping headlight too, so you can look into the bags without too much trouble.

Like any trip to the supermarket, you’re going to be coming back with a lot of food, so prepare accordingly: if you need to drive, it can be a good idea to lay down some newspaper in the trunk of your car. If it’s a walking-friendly city, you can either use lanyards or a bike trailer and ride your bike over or use a “granny cart” and walk to the market. In any case, treat it just like any normal big shopping excursion.

When you arrive, if you live in an urban area, odds are there might already be some people dumpster diving. In any case, walk up to the trash, and start feeling the bags: some bags will be mostly paper products and regular garbage, and you can usually tell this without opening up the bag. After a few trips, you’ll get the hang of this pretty quick.

If the bags are in big dumpsters, you should remove a bag and look through it, but be sure to replace the bag, tied up, into the dumpster. If they’re on the street, open them without ripping them, and tie them back up. Generally leave things as you found them, perhaps a strange admonition when dealing with trash, but it’s the best way to make sure the store doesn’t get upset with dumpster divers and that the trash company can do their job.

The main thing when going through the trash is: don’t be bashful! Go for it. Dig through the bags with your gloves, and pull things out that feel promising. Use your judgment. If a fruit or vegetable looks rotten, don’t take it! But if you find a bag of apples or oranges and one is bad, but the rest are good, and you can separate it out at home (this can be especially good if you also have a compost system.) Canned goods are almost always fine to take, and prepared foods usually are as well. Don’t worry too much about expiration dates: rely on your judgment and common sense about food. Don’t take anything you’re worried about: you can always do another trip. I’ve never gotten sick from dumpster diving, and there’s no reason you should either.

Once you’ve found a good amount of food, and you’re satisfied with what you have, load it all up, make sure you’ve tidied up the area and bring it home.

When you get home, make sure to wash everything that was sitting unwrapped in the trash. Just wash it thoroughly, and then store it like you would regular food. You’ll be amazed at the bounty of fresh food that you can get. You’ll be able to make delicious meals without spending a cent. And it’s always nice to prepare a big meal or host a potluck for your friends or community with the food you found. Of course, dumpster diving is not a solution to the major problem of food waste. We need concerted community action, and a reorganization of our priorities and our distribution systems. While CSAs, co-ops and other more direct methods of food distribution are on the rise, the vast majority of Americans get their food from waste-producing supermarkets.

In a perfect world, supermarkets would not exist as they do: the model that they operate on necessitates waste on a tremendous scale. But if you’re worried about waste, or just want to save a few dollars, dumpster diving is a great way to start getting involved. I know for me, it led to more direct political involvement in food issues in my community: I’ve written about that for shareable before. And if you’re already a dumpster diver, we’d love to hear your stories!

This article was originally published on November 7, 2012