How to Design a Neighborhood for Happiness - Shareable
Skip to content 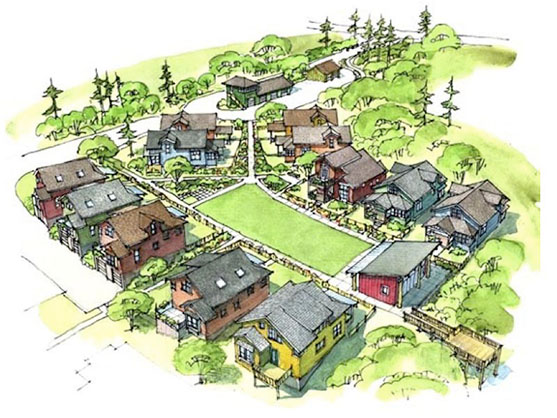 But if Freud were around today, he might say “design is destiny”—especially after taking a stroll through most American cities.

The way we design our communities plays a huge role in how we experience our lives. Neighborhoods built without sidewalks, for instance, mean that people walk less and therefore experience fewer spontaneous encounters, which is what instills a spirit of community to a place. That’s a chief cause of the social isolation so rampant in the modern world that contributes to depression, distrust and other maladies.

You don’t have to be a therapist to realize all this creates lasting psychological effects. It thwarts the connections between people that encourage us to congregate, cooperate and work for the common good. We retreat into ever more privatized existences.

Of course, this is no startling revelation. Over the past 40 years, the shrinking sense of community across America has been widely discussed, and many proposals outlined about how to bring us back together.

One of the notable solutions being put into practice to combat this problem is New Urbanism, an architectural movement to build new communities (and revitalize existing ones) by maximizing opportunities for social exchange: public plazas, front porches, corner stores, coffee shops, neighborhood schools, narrow streets and, yes, sidewalks.

This line of thinking has transformed many communities, including my own World War I-era neighborhood in Minneapolis, which thankfully has sidewalks but was once bereft of the inviting public places that animate a community. Now I marvel at all the choices I have to mingle with the neighbors over a cappuccino, Pabst Blue Ribbon, juevos rancheros, artwork at a gallery opening or head of lettuce at the farmer’s market.

But while New Urbanism is making strides at the level of the neighborhood, we still spend most of our time at home, which today means seeing no one other than our nuclear family. How could we widen that circle just a bit?  Not a ‘60s commune (“pass the brown rice, comrade, and don’t forget your shift cleaning the toilet ”), but good neighbors with whom we share more than a property line.

That’s an idea Seattle-area architect Ross Chapin has explored for many years, and now showcases in an inspiring and beautiful new book: Pocket Neighborhoods: Creating a Small-Scale Community in a Large-Scale World.

He believes that groupings of four to twelve households make an ideal community “where meaningful ‘neighborly’ relationships are fostered.” But even here, design shapes our destiny. Chapin explains that strong connections between neighbors develop most fully and organically when everyone shares some "common ground".

That can be a semi-private square, as in the pocket neighborhoods Chapin designed in the Seattle area. In the book’s bright photographs, they look like grassy patches of paradise, where kids scamper, flowers bloom, and neighbors stop to chat.

But Chapin points out these commons can take many different forms—an apartment building in Cambridge with a shared backyard, a group of neighbors in Oakland who tore down their backyard fences to create a commons, a block in Baltimore that turned their alley into a pubic commons, or the residential pedestrian streets found in Manhattan Beach, California, and all around Europe.

The benefits of a living in a pocket neighborhood go farther than you might imagine. I lived in one while in graduate school, a rundown 1886 rowhouse with its own courtyard near the University of Minnesota campus.  At no other time in my life have I become such close friends with my neighbors. We shared impromptu afternoon conversations at the picnic table and parties that went into the early hours of the morning under Italian lights we strung from the trees.

When the property was sold to an ambitious young man who jacked up the rents to raise capital for the eventual demolition of the building to make way for an ugly new one, we organized a rent strike. And we won, which would never have happened if we had not already forged strong bonds with each other. Because the judged ruled that the landlord could not raise our rents until he fixed up the building, he abandoned plans to knock it down. It still stands today, and I remain friends with some of the old gang that partied in the courtyard.

This piece is from Jay Walljasper's book All That We Share: A Field Guide to the Commons, which chronicles the emerging movement to save what belongs to everyone. A not to be missed related read is Jay's earlier article, "Can We Design Cities for Happiness?"