How to Create a Bike Corridor - Shareable
Skip to content

The “Better Bikeways” series originally appeared on the website of GOOD magazine, a collaboration of individuals, businesses, and nonprofits pushing the world forward.

When I began exploring how bike route signage could be redesigned to increase its effectiveness for Los Angeles, I quickly discovered that a test case was in order. An existing route would need to be chosen so that I could assess the conditions and challenges that improved signage would have to contend with. One route sprung immediately to mind: 4th Street.

Fourth Street boasts many features that make it ideal for biking. Traffic along the route is relatively light, it parallels major thoroughfares like Wilshire Boulevard and 6th Street, and numerous public transportation hubs can be found just a few blocks distant. Fourth Street also passes through several commercial, business, and residential centers.

Recognizing these advantages, Los Angeles’s current Bike Master Plan designates 4th Street as a “bike friendly street.” A recent count of bike traffic along 4th Street showed that on average more than 14 cyclists per hour are already making use of the route. With its wide roadway 4th Street has room to accommodate an even greater number of cyclists.

In addition to these obvious advantages, 4th Street has always been a favorite route of mine to ride. Quiet and peaceful, it stands in stark opposition to the usual L.A. driving experience.

In conducting the hands-on workshops that were a key part of my project’s research phase, I asked local cyclists to consider 4th Street as a model and a test case as we discussed issues pertaining to bike route signage. My project, however, was hardly the first (or last) undertaking to take a close look at 4th Street’s potential as a bike-friendly route.

A movement has been afoot for years to remake 4th Street as a “Bike Blvd,” a bike-friendly street with various road improvements (such as traffic diverters, signage, or lane markings) that help bikes, cars, and pedestrians safely share the road. To get an idea of how Bike Blvds work, take a look at this example from Portland, Oregon:

By posting temporary signs and road stencils along the route and organizing group rides, activists have in the past drawn attention to the potential of 4th Street as a biking resource. The efforts of the organizer Ingrid Peterson have led to city council member Tom LaBonge, whose district encompasses 4th Street, joining group rides along 4th Street in 2007 and 2008. If you’re interested in learning more of the history of these efforts, Peterson maintains a website that is a clearinghouse of information for all things relating to the 4th Street Bicycle Blvd (or 4SBB) movement.

More recently, bike activists have again tried to draw attention to 4th Street’s potential. The Los Angeles County Bicycle Coalition and Cyclists Inciting Change Thru Live Exchange (CICLE) came together last summer to form a committee to explore options for making 4th Street more bike-friendly. The impetus for this push came from LACBC’s Dorothy Le and CICLE’s Joe Linton. The group has discussed design concepts like sidewalk extensions, traffic roundabouts, and new crosswalks which would make the street safer for cyclists while beautifying the area with additional greenspace. At present these ideas are still rough concepts but the committee plans to begin outreach efforts to involve local stakeholders and push the development process forward.

As other, similar proposals have met with resistance in the past, the committee hopes to involve neighborhood councils and businesses in the planning, educating them about the potential benefits of making 4th Street more bike-friendly. These benefits include quieter streets as well as a potential increase in traffic for local businesses. 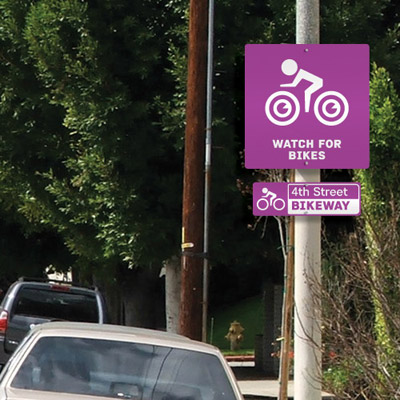 Writing recently in the Los Angeles Business Journal, Richard Risemberg makes the case that Bike Blvds make good economic sense as they can funnel large numbers of shoppers into commercial districts more efficiently then roads designed solely for cars. Risemberg points to studies in Toronto and San Francisco that show that only 30 percent of customers at local merchants were arriving to shop by car. And, as Risemberg goes on to remind us, you can park 12 bicycles in the space that it takes to accommodate just one car. The fiscal benefit of better bikeway planning extends to local government as well as they are cheaper to build and maintain then adding additional lane miles for cars.

If you live in LA and you’re interested in helping in the 4th Street effort—or learning more about how to launch your own—Linton suggests several actions you can take.

You can find out more about the committee’s work and how you can get involved by visiting their campaign site. You can also write your councilperson (in L.A.’s case Councilman Tom LaBonge) and let him know that you support making 4th Street a true Bike Blvd. Pushing for these kind of changes in the public infrastructure takes considerable time and determination. Only if enough yclists make their voices heard will change happen.

Of course, not all cyclists are content to wait for government to take action. Perhaps the people best suited to start instituting improvements are cyclists themselves. Next week in the “Better Bikeways” series: the DIY and guerrilla projects that are helping to shape the future of bike planning.

Joseph Prichard is a Los Angeles based freelance designer, typographer, and bon vivant. His practice includes design for print, environmental and web applications. Mr. Prichard holds a BFA in Film

Joseph Prichard is a Los Angeles based freelance designer, typographer, and bon vivant. His practice includes design for print, environmental and web applications. Mr. Prichard holds a BFA in Film from the USC School of Cinema/Television and an MFA in Graphic Design from the California Institute of the Arts. His work has been shown at the California Institute of the Arts, York University & Rodan vs Griffith and featured in publications such as Monocle, Fast Company, the Montreal Gazette & Mammut magazine.