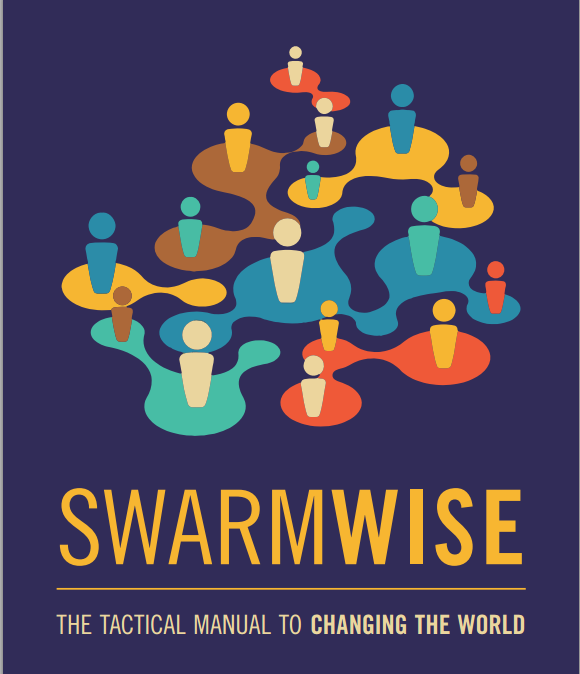 In 2005, Rick Falvinge of Sweden launched a new political party, the Swedish Pirate Party, on a platform to reform copyright and patent laws. It's now the third largest party in Sweden, it won two European Parliament seats in 2009, and it inspired the International Pirate Party movement with representation in over 60 countries. The rise of the party has been remarkably fast. In Swarmwise: The Tactical Manual to Changing the World, Falvinge describes how he did it with a unique, decentralized organizing architecture that leverages the power of technology and the crowd to spread ideas and work across diverse groups of people.

Falvinge defines a swarm as: “a decentralized, collaborative effort of volunteers that looks like a hierarchical, traditional organization from the outside. It is built by a small core of people that construct a scaffolding of go-to people, enabling a large number of volunteers to cooperate on a common goal in quantities of people not possible before the net was available.”

The key is decentralization. The founder must set the vision and goal and then release control of messaging and branding, delegate as much authority as possible, and embrace the fact that the only way to lead is to inspire.

A swarm has a shared direction, values and method. Informal leadership is strong, and focuses on everyone’s contributions. The main benefits to swarm organization are:

Step One: Find an idea to change the world that people can get excited about.

This is critical. The idea must be a game-changer- so exciting, revolutionary and provocative that it will sell itself. Your idea must have four key attributes to be worthy:

Step Two: Do the Math

You need to figure out, at the outset, the size of your audience and the percentage of those people you need on board to make the idea happen.  The specifics of the math will vary for each situation, but in general

In the case of the Swedish Pirate Party’s goal of winning a seat in the European Parliament:

Therefore, the Swedish Pirate party needed to convert 1 in 4 people to their way of thinking.

The idea is then launched. The stake must be out in the ground, rough and unpolished though it may be.  If the idea is worthy (see Step One), thousands will gravitate to it; it will spread like a virus.  In the case of the Swedish Pirate Party, Falvinge posted a website with a manifesto and immediately had hundreds of people engaged- the makings of a swarm. It’s like magic!

In the first several days, the scaffolding for the swarm must be constructed methodically as follows:

In the first four weeks, each subgroup must set and accomplish their first task, meet informally, and welcome newcomers as they arrive.  A concierge role is likely to ne needed.

In the first six to eight weeks, a scaffolding of officers is built as the support structure for swarm development, organization and operation. Group dynamics theory dictates that no more than seven people can effectively work closely.  All local geographies should split off once the group exceeds seven.

A coordinator group can oversee areas of contiguous geography until the total number of swarm members exceeds about 35 people, it must split off into another geography unit or risk blocking the growth of the swarm. 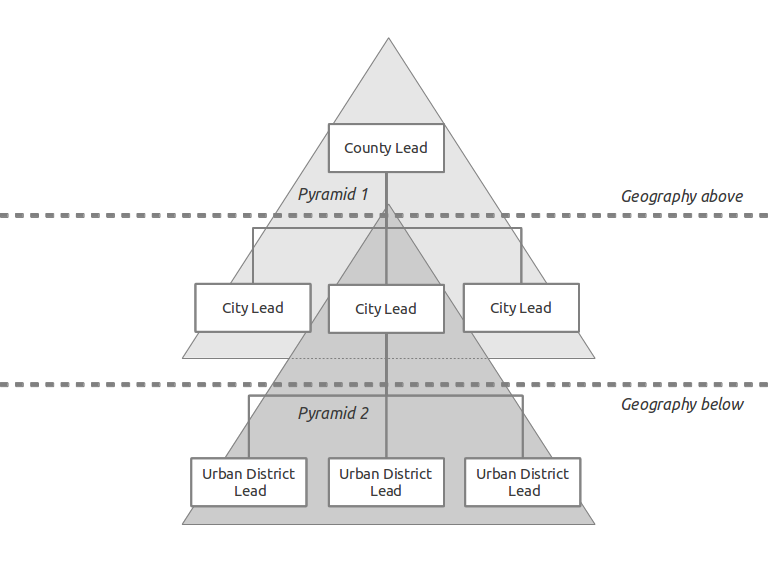 In summary, keep formal working groups in the scaffolding to about seven people. When several groups are working together, try to keep the size at or below thirty. Pay close attention to when informal swarm groups approach 150 people in size. When that happens, take steps to break them up in smaller subgroups.

The idea is to function without central planning; each swarm unit is self-functioning, adhering to the overall goal but implementing tasks in it’s own way according to its own context.

There are three swarm activity levels:

And four functional leaders for each geography, in order of extroverted to introverted), each with a deputy:

The swarm leader sets the vision, but the local groups disseminate the message. The particulars may change according to the local audience, and only the local group will know how to best convey it.  Four classical methods are available for conveying the message: handing out flyers, placing posters, having tables at events, and staging rallies or street protests.

Set up a communications hub that “oldmedia” can latch onto, like a WordPress blog. Issue press releases on the website. The founder is the avatar of “oldmedia” representation. The founder should be present at all rallies and public events and be available for “oldmedia.”

The founder should write the op-eds.  Opportunities include op-eds about upcoming events the warm has an opinion on, responses to large news events, counter=points to published opinion pieces.

The leader must be a leader and a visionary, not a project manager. The leader must inspire and set the organizational tone of decentralization.  It is important to identify key milestones and a timeline so that everyone sees progress happen, and can feel a sense of urgency.  Public measurement of success, or gamification, is an important method to motivate people.

The leader will progress form direct hand-holding, to explaining, to encouragement, to recognition.

The swarm is not a democracy.  It operates by consensus.  The goal is not to create losers but to have everyone buy in to the program. To resolve conflict, make a rule: no one gets to tell anyone else what to do.  If people don’t like it, they will leave and the swarm will correct itself.

There will be “mavericks” and “organizational astronauts” who will not buy into this management style. Do not capitulate to them.  Eventually, they will adapt or leave.

The swarm will grow form the edges.  Off –line relationships are key to making tis happen. People at the edges of the swarm need to have “heartbeat” meetings or messages once per week to maintain motivation.

Mass communications tools like texting are great for rapid mobilization.

It is important to look professional and be noticeable. Wear bright colors. Be professional, respectful, and make sure each member of the swarm feels values by constant recognition.

As the swarm grows and succeeds, the founder must be aware of the weight of his or her words and actions.  The swarm can get lax, it is important to be constantly on-message and relentless about getting message out.

A successful swarm will be copied. Do not ignore them.  Lend as much energy as you can without sacrificing your own.

All versions of the book (including free ones, of course) are available at the bottom of this page.