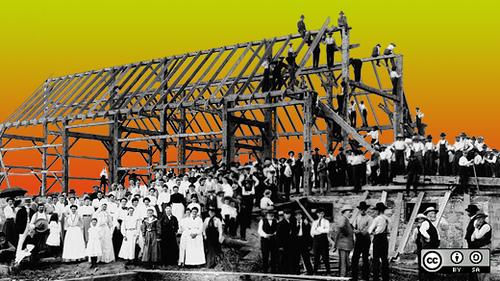 One of the important principles when considering open source projects and related communities is there needs to be an ecosystem around the project for the community to thrive. This is to recognize the fact that sharing is hard work, and that to share things well requires an additional degree of discipline that is often not present in other contexts. Although most of these guidelines are derived from experience in the software world, they're applicable in many other places.

My own background is as follows, I have pursued my own research in academia while remaining engaged in innovative software development including popular open source projects like PhpBB, to Ruby on Rails, to jQuery, to the enterprise software world.

A sampling of work in this realm can be found in my Github profile. Additionally, not long ago I was asked by senior Salesforce staff to put together a list of recommendations for stimulating the ecosystem at large. What follows is largely adapted from my recommendations (which, to the best of my knowledge, have not been implemented).

Finding passion outside of money

Much of the specific recommendations here follow from observations about human psychology. Humans can and should follow their passion, which is very often to contribute to the world in some way. However, there are often many forces in the world which militate against people following their passion. One of those is the reduction of productivity to money, a facet that, when taken to its logical end in many sectors of the corporate world, encourages only productivity that can easily be turned into money (a problem especially potent in the B2B world).

One major problem here is that many areas of innovation end up limited to particular corporate container, and any innovation within is not shared with the broader community that might benefit from it. One of the core benefits of the open source software world is that you are not limited to the confines of a single company. Expanding the scope of people engaged potentially gives you access to a greater amount of talent, but it is more difficult to get a significant degree of people's time.

How to build open source communities

Here are a variety of tips that I've come up to build an open source ecosystem that connects both people and resources:

All of this boils down to one fundamental point, you need to connect passion to resources. Productive passion comes very often from solving a problem. All of us have problems in our daily lives that we would like to solve in some way, and many of us are even capable of dedicating a significant amount of time towards solving them, we simply need to be connected with the right resources.

A community is fundamentally about that. Passionate people want to be surrounded by other passionate people. There is synergy and increased productivity. And they need other types of resources too, of which money is a major component, since it allows us to acquire the tools that we need. Connecting the dots is primarily about going in there first, building something that people need, and allowing things to grow organically.

Thankfully, the world of software is moving forward rapidly toward recognition on the basis of contribution. Sites like Github show in a more open way both the quality of your code and the degree of your commitment to contribution. Although sharing hasn't sunk in everywhere and many corporations are managed primarily on a profit motive, the ability of people who care about sharing to coordinate is unprecedented. Expect more exciting things as people use the new tools to organize for greater contribution, not simply greater profit.

Agree with these points? Have something to add or a resource to share? Please share in comments.

Hailed as a boy genius, Joel Dietz learned to program at age six, completed a couple of Ivy-League degrees focused on comparative philosophy, co-founded a student exchange program with a

Hailed as a boy genius, Joel Dietz learned to program at age six, completed a couple of Ivy-League degrees focused on comparative philosophy, co-founded a student exchange program with a presence in Beijing and Berkeley, and worked on economic policy for a think-tank in Washington DC. More recently, he received awards from Google and Salesforce for his contributions to open source software and served as Principal Architect for Europe's fastest growing cloud consultancy. He currently teaches yoga in Assisi, Italy and writes on the benefits of collaborative consumption.

Things I share: software, space on my couch, writings, food I grow, food I make