How to build a better neighborhood - Shareable
Skip to content 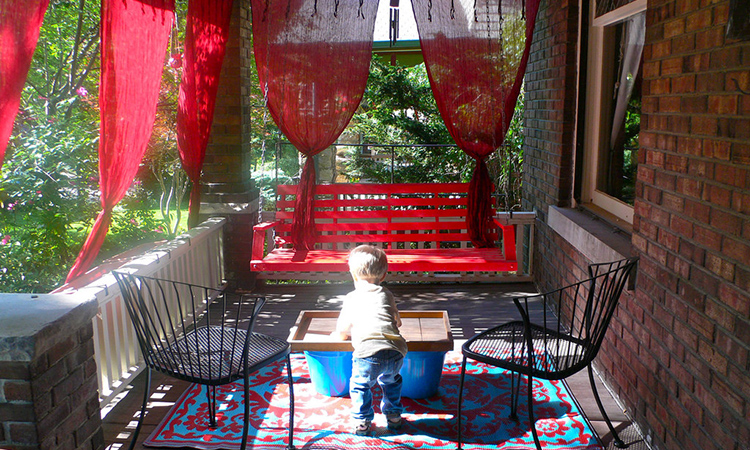 Even if we haven't actually experienced it, most of us have nostalgia for that perfect neighborhood, the one where people know each other, help each other, and hang out together. So what is the one ingredient necessary to create that kind of vibe on the streets where we actually live now, today? Face-time. Or in this case, porch time. I talked with Catherine Borek in the Silver Lake neighborhood of Los Angeles to find out how to conjure community. Her street is full of face time. The cul de sac has a spirit anyone walking a dog there can feel. And one source of that spirit is Catherine's wide, inviting Craftsman-style front porch. While her previous street was a "point a to point b" kind of place, she describes the street where she and a number of new families moved in 2005 as a true destination. "It's a [place for] meandering," she says. "There'll be times when we walk around the circle and it takes 10 minutes, other times it takes a full hour or hour and a half because we stop and talk to so many people along the way."

When she went looking for a house to buy, she knew she wanted her family, husband and then one daughter, now two, to live in a place that feels like a village. And it does. Formal gatherings bring together over half the renters and homeowners while a more core group of families hang there on the weekend, watch each other's kids, and scheme big ideas like bicycle races, parades, and matching t-shirts touting their street as the best in L.A. To inspire making your own neighborhood more neighborly, even if it's an apartment building, here are ideas gleaned from Borek's block:

For two years running, the street has thrown a Labor Day bash that goes from noon to midnight. Complete with relay races and egg tosses, live music, and food, it's an all-out old-fashioned extravaganza of chillin' together. It works. Borek describes the day after the first block party as euphoric. "Everyone was talking and the kids were playing together," she says. "One neighbor threw open her window and yelled down to someone passing on the street." There's also an annual Halloween party and occasional sports days in the park to fuel active, good times.

You don't need a street closure permit for a potluck. Folks on "the block," as they call it, frequently invite one another over for informal dinners with homemade dishes. Foodies bring the bounty from their backyard fruit trees and vegetable gardens. One resident hosts movie nights, where she projects films outside on warm evenings. Before the election, they held debate-watching sessions together. Just stopping to talk to someone who recently moved in or holding a playdate with kids makes a difference. "There are a lot of open doors… and there's something so delightful about that. You get to be social, but it doesn't have to be this planned, huge event."

Borek says daily, after-work "porch time" is unofficial, but that doesn't make it any less of a ritual. It’s all about face time. Or porch time, if you have one. "That's the thing about porches: if somebody's sitting on one, people tend to talk." When I arrived one afternoon, good friend and neighbor Rebecca was in a rocking chair with Borek's newest baby girl in her lap, and their daughters were chalk-drawing on the sidewalk. Pretty much every day from 4:00 p.m. on you'll find people young and old streaming by and generally cavorting. It's that face-time thing again. Being in the front yard instead of out back or inside generates a lot more neighborliness.

Plus, it's good for the kids — they don't play solo and they get to be outdoors (an easy feat in Southern California for most of the year). Borek is a firm believer in the "takes a village to raise a child" maxim. I overheard both her and Rebecca say to their respective daughters some variation of, "That isn't true and it isn't nice" — clearly they've rubbed off on one another. Many parents on the street discipline each other's progeny and as long as one adult is present, kids of disparate ages play games in various spots on the street. "When there's more than one adult that loves you," Borek says, "There's a tremendous benefit."

This will ensure everyone is connected and in the loop. Borek's street even has a Facebook page for sharing photos. Borek attributes her high happiness quotient over the last few years to her neighborhood's evolution. Before living in real community, she says "there was a lot of coming home, sitting on the couch because you just want to chill out … But when you have neighbors who come by on a regular basis, it keeps that social cord running so that you're not in your own little nebulous world watching bad TV. You're talking to real people. It's energy-giving."

This article was originally published in 2010 and was updated in 2018. This article is part of a series of action-oriented guides that align with Post Carbon Institute's Think Resilience online course. The Think Resilience course prepares participants with the systems-level knowledge needed to take meaningful actions as suggested in this and other "How to Share" guides in the series.

Danielle Davis is a writer in Los Angeles. So far she shares stories, clothes, scooter rides with her husband, and her patio with a lot of sparrows. You can find

Danielle Davis is a writer in Los Angeles. So far she shares stories, clothes, scooter rides with her husband, and her patio with a lot of sparrows. You can find her at Danielle Davis Reads and Writes (www.danielledavisreadsandwrites.com) or writing and editing Your Daily Thread (www.yourdailythread.com).