How Tax-Sharing Can Save Cities - Shareable
Skip to content 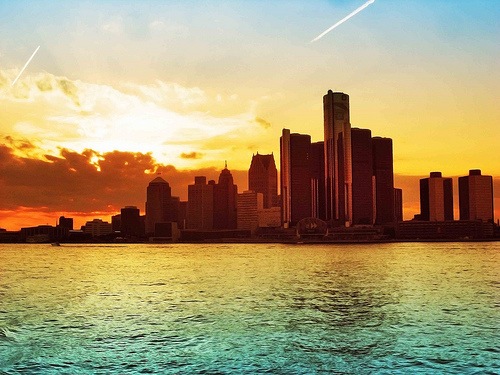 As the son of a geography teacher, who spent endless hours of my youth poring over maps, I’ve always been fascinated with border lines. As a kid I imagined that crossing from, say, Nevada into California, would offer an immediate change of scenery from desert to Redwood trees.

I later discovered that off the map, the world is not so dramatic. At least that’s what I thought until recently when I visited Detroit with a team of seasoned urban observers from the Citistates Group. We were meeting with the Kresge Foundation about its ambitious plans for revitalizing the city, and two Kresge program officers — Wendy Jackson and Benjamin Kennedy — graciously offered to give us a tour. Despite big hopes for Detroit, the two of them — who both live right in the city — did not spare us the sight of utterly devastated neighborhoods where most of the houses and people are long gone.

Stretches of Detroit look like an urban ghost town, with only two or three houses remaining on a block. But we also saw neighborhoods alive with people and well-kept businesses or homes: downtown, the midtown area around Wayne State University, the Indian Village historic district, Northwest Detroit, Lafayette Park and others.

What really astonished us was the city line between Detroit and the adjoining town of Grosse Pointe Park, where America’s poster child for urban decline runs directly up against a suburb whose name has long been synonymous with wealth.

Along Kercheval Street, as you approach from the Detroit side, the last structure is a St. Vincent de Paul thrift shop that collects cast-off household goods and clothes for poor families. It’s reminiscent of so many of the streets of today’s Detroit, gap-toothed scenes with rundown remnants of elegant homes and apartment buildings looking marooned in a tide of vacant lots.

But there’s the line — not to be missed, as the sidewalk turns from scruffy concrete to picturesque brick, accompanied by a soothing row of locust trees. And cheek-by-jowl with the thrift store, the Grosse Pointe side offers an antiquarian bookshop that looks straight out of London with displays of leather-bound classics in its windows.

This kind of city-suburban divide raises disturbing questions, not only about urban decline but also about our shrinking sense of the common good. Through years of travel, the only comparable experience was crossing from East to West Berlin in the days before Germany reunited. But the Detroit-Grosse Pointe boundary poses an even more stark contrast between deprivation and prosperity — all within the boundaries of the same nation.

One wonders how much longer one would wait for an ambulance or police car to answer a 911 call in Detroit. What are the schools like in suburban Grosse Pointe compared to the city? Matters of life and death, your children’s hope for the future or their despair, can depend upon on which side of the line you live.

A society dedicated to the common good — to the ideal of the commons — would not accept such disparities with a simple shrug. The whole region would share public services and social responsibilities. No community would be allowed to sink so deep into devastation — no matter how profound its problems.

In Copenhagen, for instance, the wealthy northern suburbs long supported revitalization efforts in the inner city through tax revenues. Now that the central city is thriving — a remarkable comeback that’s being emulated in other metropolitan regions around the world — it’s now urban dwellers’ turn to help revive the region’s poorer suburbs.

Even in the U.S., this kind of tax sharing goes on across city lines. In the Twin Cities, each of the 180 local municipalities contributes a portion of its commercial-industrial property tax revenues — 37 percent on average across the region, amounting to $424 million this year. The fund are then apportioned to communities on the basis of financial need. The center cities and lower income suburbs in Twin Cities region draw on these funds to bolster schools and public services, which explains why you don’t see any shocking differences passing from a blue-collar community to an upscale one.

These kind of policies acknowledge the obvious fact that a metropolitan area is a single organism — and municipal boundaries are mere abstractions, arbitrary lines sketched on a piece of paper. But in the current anti-tax, anti-commons political climate, when the idea of the common good can’t be heard above the shouting, regionalist policies like those found in Copenhagen or even the Twin Cities are not going to be enacted any time soon. That’s where the Kresge Foundation comes in.

Kresge, based in suburban Troy, along with a number of other foundations in the Detroit region and around the country, is dedicated to helping revive the city through an initiative called Re-imagining Detroit 2020. The ambitious goals include improvements for public schools, major sustainability initiatives, cultural programs, a light rail line along the city’s spine (Woodward Avenue), and local business development. The thrust of this effort is the conviction that Detroit is not a basket case, even if it has sometimes suffered corrupt and inept political leadership. It’s still vital community, even if it is caught up in a complicated tangle of economic disinvestment, racial mistrust, crime concerns and overdependence on automobiles.

And it’s important to note that inner-city residents will not be the only beneficiaries if Re-imagining Detroit’s plans bear fruit. No metropolitan area can thrive with a withering city at its core. Even before the near-collapse of the auto industry in 2008, the Detroit area — studded with wealthy suburbs that are worlds apart from the problems of the inner city — was not keeping pace economically with other regions where the central cities were prospering.

On two recent visits I’ve seen evidence that Detroit’s famously feisty residents have not given up on their hometown. Some neighborhoods show signs of reversing urban blight, largely through the indomitable spirit of entrepreneurs and grassroots organizations — sources of positive energy that Kresge and other foundations want to join forces with to revive the city.

I see credible signs of hope that some day in the not-too-distant future strolling from Detroit into Grosse Pointe Park will be no more eventful than traveling from Kansas to Nebraska.

This entry was expanded from a blog entry at On The Commons, a Shareable.net content partner, and originally published in Citiwire.