Hacking the Commons: How to Start a Hackerspace - Shareable
Skip to content 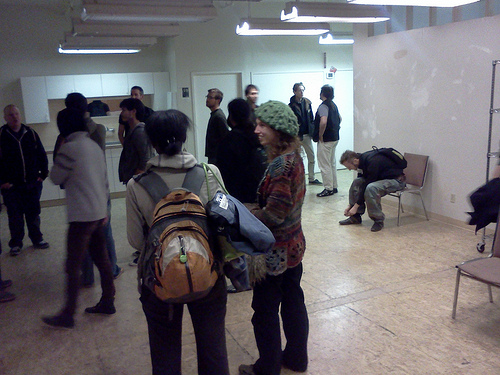 It's a sunny Saturday in downtown Oakland, and I'm touring a potential new space for Sudo Room, a DIY/creative/technical hackerspace I've been co-creating with a hodgepodge array of changemakers for the past year. As we're exploring the space, faces both familiar and fresh continue to trickle in. Ryan tells me we'll have to add air-filters to the common room. We could leave them out for now, but the fumes from soldering stations and laser cutters will make for a toxic hangout space and could contaminate the GMO bacteria growing in the next room over, causing a feud between the hardware hackers and wetware hackers: Carbon vs. silicon.

With visions of a federation of Bay Area DIY communities dancing in our brains, we'd invited nearly a dozen ethically aligned groups and individuals to check out the other rooms available for rent that surround the common space in the building we will be moving into this week. As such, our group today includes representatives from LOL, Ace Monster Toys, Noisebridge, and the Anarchafeminist Hackerhive.

To rewind a bit and cover any confusion over the oft-misunderstood term “hacker,” allow me to clarify: A hacker is not necessarily someone who maliciously breaks into computer systems – as mass media portrayals would have you assume. A hacker is a learning enthusiast, someone who is so curious as to take something apart completely in order to discover the fundamental components of a system. To "hack," then, is to learn the process of creating something through doing it, and through modifying it to do what you want it to do (a more detailed explanation can be found here). Put simply, in the words of McKenzie Wark (author of The Hacker Manifesto): “The slogan of the hacker class is not the workers of the world united, but the workings of the world untied.”

Among our group today, I count at least two biohackers, three writers, half a dozen software developers and web geeks, and a bevy of folks with interests ranging from 3D printing to building robots to starting a cooperative business. What unites us is a shared passion for citizen science and open access to tools and education – as well as a strong desire for community.

Events in the Life of Sudo Room

This month marks the one-year anniversary of Sudo Room's first meeting. From the beginning, we committed ourselves to the active practice of openness, transparency and collaboration. Drawing from prior experience as well as the Hackerspace Design Patterns guide, we set up a mailing list, wiki, and IRC channel. We take notes together using an etherpad shared document, and post them on the wiki after each meeting. We decided to run by consensus without fastening ourselves to a binding agreement; iteration is invaluable, and we wanted to leave room for growth and change.

The first Sudo Room meetings were held at an Oakland technology salon, Tech Liminal, every Wednesday night for more than 6 months. There, we incubated at somewhere between 5 and 12 folks per meeting, regularly overlapping with local techie non-profits who showed up to meet, organize, and hack on innovative civic projects. During this time we also created a collaboratively written mission statement:

Sudo Room is an open, non-hierarchical, collaborative community of humans, including tech developers, citizen scientists, activists, artists–and all combinations in between and beyond!–who are interested in and working towards social change. Our goal is to create the first inclusive, dedicated hackerspace in downtown Oakland, to share ideas and projects in citizen science, digital citizenship and literacy, environmental sustainability, community engagement, and self-government.

Sudo Room is committed to access, empowerment, transparency, and public/social good. Sudoers have a great diversity of interests and we emphasize respect and solidarity among ourselves and with others.

In May, we had a kickstarter/fundraiser (calling it a 'kickraiser') featuring a panel of Bay Area hackerspace representatives, including BioCurious (a DIY biotech space in Sunnyvale), HackerMoms (a hackerspace for moms in Berkeley) and The Crucible (a fine and industrial arts education space in Oakland) as well as the aforementioned (Noisebridge, LOL and Ace Monster Toys). Participants spoke on the topic of “Hackerspaces: The Necessity for Community Spaces Here and Everywhere.” 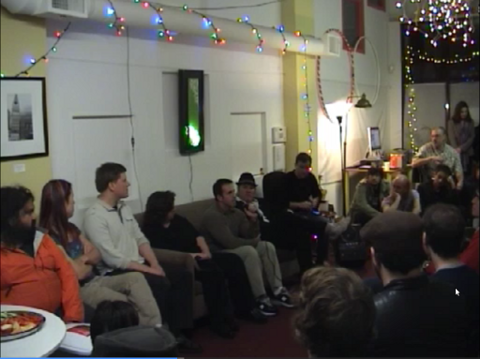 Come summer, we'd moved into a space – of sorts – an eclectic building also home to a psychic, an improv theater group, a nurse's training organization and a gun security instructor. We rented the box office and a tiny orange closet, giving us access to the large classroom space and two smaller back rooms. For better or worse, the improv theater folks hold auditions in the classroom every weekday evening. We have our meetings in the back room, but the open ceilings prevent any possibility of privacy – our voices often straining to be heard over the raucous hollering and silly sounds of the actors.

Despite the limitations of the space, we made the most of our momentum: We worked together to develop a governance structure, get a bank account, and forge a compact.

We also made the most of our location in uptown Oakland by hosting events for the monthly First Friday Art Murmur. For August's Art Murmur, we took the opportunity to stage a public announcement declaring our Intent to Exist – a requisite for obtaining a bank account without a federal tax ID – followed by an attempt to see how many hackers we could fit in our small box office space (the answer? 42.)

Sudo Room has also been in a courtship with Coyote Counter Collective, an Oakland-based workers' cooperative workshop and retail space for fashion designers, leatherworkers, and other kinds of functional, sustainable artistry. Our clothes-hacking night during September's Art Murmur featured electronic conductive thread and LEDs sewn onto donated clothing and homemade hats.

Just this week, Sudo Room voted unanimously to move into the larger space at 2141 Broadway St. We intend to hold a series of fundraisers throughout Oakland throughout the end of November and the first week of December to ensure we keep member dues as low as possible.

Toward a Federation of Bay Area DIY Communities

Our kickraiser helped us raise the funds we needed to get our initial space, but more importantly, it brought together other Bay Area hackerspaces in a spirit of cooperation, camaraderie and support.

There is something truly exciting about the interconnections between subcultures and the value of their hybridization in the spirit of creativity. What happens, for instance, when you combine botany buffs and hackers? You might get something like BioBridge, the amorphous DIYbio contingent of Noisebridgers, working on experiments in oyster mushroom growing and developing Arduino-controlled sensors for monitoring temperature and pH levels in kombucha brews and sourdough starters. Here you would also find overlap with Tastebridge's Vegan Hackers night and perhaps some friendly Food Not Bombs volunteers.

While Sudo Room embraces an inclusive model of “hacking” that goes beyond hardware and software – to wetware, wearables, and even culture itself – there is certainly reason to resist confining ourselves to hacker culture alone. While not disregarding the admirable ethical core of lifelong learning, decentralization, and collaboration, the term is also connotative of an elite culture consisting of a privileged class of internet savants.

Jen-Mei Wu, co-founder of Liberating Ourselves Locally, wrote the following in response to our invitation for Saturday:

“I really liked the way you called the proposed federation a DIY federation and not a hackerspace federation. Often when I talk w/ hacktivists, I get the feeling they think everyone should hack, that hacking == DIY. But … there's this whole amazing universe of DIY groups that live outside (sometimes waaaay outside) hacktivist circles, and they are doing great things.

I think hackerspaces really could learn a lot from each other, but that they could gain even more by being part of a larger community of DIY organizations.”

LOL, short for Liberating Ourselves Locally, is an Oakland maker space founded and run by people of color. The group works closely with other local grassroots organizations dedicated to fostering self-sufficiency and community-based commerce. Their events have ranged from weekly carpentry classes to yoga classes, meditation sessions, Decolonize study groups and political co-education (with pancakes!), demonstrating the wide swath of possibilities for creating an inclusive community education model.

Considerations Toward the Future Network Economy

As we move forward into the future of increased access to technologies, citizen science, and DIY engineering, we'd do well to be wary of those who would seek to co-op and capitalize off of this movement. Maker Faire's announcement early this year that they are now accepting funding from DARPA – who are also sponsoring 'makerspaces' in high schools nationwide – has introduced some deep questioning over the ethical responsibilities of hackers and DIY enthusiasts. Are we still DIY if dependent on funding from the US Defense Advanced Research Projects Agency? Do we want to support military-funded and run projects in our schools?

The solution may well be to foster the kind of grassroots coalition-building that would connect DIY spaces and tools with neighborhood community organizations, worker-owned business cooperatives, local investors, and new opportunities for crowdfunding. The JOBS Act, which passed through the House earlier this year and comes into action in January, would allow the public up to $1 million in shared equity through crowdfunding platforms – bypassing the typical route through Wall Street by which companies and investors were previously obligated to navigate.

These are a few of the matters we are trying to hack in our efforts to manifest solutions in the spirit of collaboration. Have any ideas or questions? Make them shareable! We'd love to hear your thoughts and impressions on the potential of community creative spaces and how best to align our highest dreams with our deepest principles.

Sudo Room meets every Wednesday evening from 7-9pm at 2141 Broadway St, two blocks from the 19th St Oakland BART. We are currently campaigning to raise funds to cover the costs of our new space, and would be deeply grateful for your support. You can donate here.

An incorrigibly nomadic cyberanthropologist gone gonzo, Jenny Ryan recently dropped out of graduate school to more fully tune in to emerging movements rooted in the shared struggle to reclaim the

An incorrigibly nomadic cyberanthropologist gone gonzo, Jenny Ryan recently dropped out of graduate school to more fully tune in to emerging movements rooted in the shared struggle to reclaim the commons, create public spheres through the cultivation of open spaces, and enable direct democracy through principles of federation and open source or Read/Write culture. Her past research ranges from an extensive ethnography of online social networking (The Virtual Campfire), to digital literacy skills for the 21st century (with Howard Rheingold), to the legal and ethical dimensions of problematic online content (with danah boyd), to posthuman anthropological explorations of how the dead live on online. In her spare time, she makes websites for her superhero friends, helps to organize an emerging Oakland hackerspace (Sudo Room), and acts as a connector of aligned humans, groups and projects.