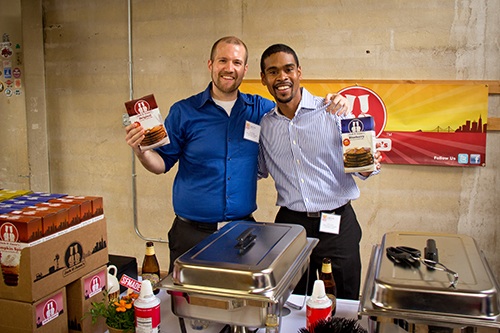 "This is a very important time for America to look for homegrown solutions for the jobs crisis."- Bill Clinton, recognizing the Urban Manufacturing Alliance on behalf of the Clinton Global Initiative

In a time of layoffs and outsourcing, something surprising is happening in San Francisco and New York: manufacturing jobs are on the rise.

Just a hundred years ago, these cities were industrial epicenters; over time, factories came to be seen as relics instead of resources. Now, America's rich manufacturing history is returning in the form of small, high-end production lines that proudly proclaim they’re locally made.

Key to this reinvention are two non-profit groups: New York's Pratt Center and SFMade. Tapping into the “buy local” mentality and seeking to shore up regional economies, these groups offer support, education and tools to local manufacturers.

The Pratt Center and SFMade have formed the Urban Manufacturing Alliance, whose goal is to “sustain and grow local manufacturing in cities.” The UMA is actively seeking other local groups dedicated to bringing blue-collar jobs back to American workers.

Though the UMA hopes to join forces with three additional cities in the upcoming year, providing local businesses with the support they need isn’t a simple undertaking. I spoke with SFMade’s Director of Programming and Communications Janet Lees about what it took to get this movement off the ground, and how you can start one in your own city.

A common misconception is that putting a “locally made” label on a product will automatically help it sell. According to Lees, people have always preferred locally-made goods, but “buying local” has its limits. The key is to have the branding represent not just a location, but a level of quality.

Founding board member Mark Dwight runs a successful bagmaking company, and used the SFMade label before there was an organization behind it. The bags themselves have always been sold nationally and internationally. Their uniqueness and quality help them to sell at a higher price point, which offsets the higher cost of manufacturing locally.

Lees’ background includes ten years working with small businesses to provide training and resources. Over time, she observed that San Francisco had a large number of product designers and entrepreneurs in need of quality manufacturing.

At the same time, SFMade’s Executive Director Kate Sofis was working as an adviser to manufacturing companies. She knew that San Francisco had manufacturing facilities that were underutilized.

It became clear that not only was there a need for quality manufacturing, but that the resources and facilities were available. Lees and Sofis created SFMade to connect the dots. The key to their success: They were deeply familiar with the industry, and sought to solve an existing problem.

Every city is different, Lees warns, and local groups will have to identify their own needs and resources, then design their response to suit.

Build a Strong Base

"We've had a lot of inquiries since we started," Lees says. People all over the country want to start local organizations. Still, she says, "I've got the feeling that a lot of people who want to do this are not wanting to do it full-time… If you're going to do this right and really serve people, you've got to raise money and you've got to have it be a real organization."

SFMade’s board includes representatives from San Francisco's biggest manufacturers, real estate developers, lawyers and bankers. It's this group of backers, Lees says, that gives the organization the legitimacy it needs to succeed.

To amass a strong team, it took networking and strategy. SFMade won a grant from the City of San Francisco by demonstrating that it intended to create new jobs. "We figured if we could get the city as a supporter, that would be a huge feather in our cap and that other funders would follow suit," Lees says. They were right. Once the City was on board, SFMade threw a fundraising event that raised over $25,000 in one night. From there, “all the lights have been green.”

Much more crucial than branding has been the ability to provide useful training and resources to help businesses succeed. SFMade provides classes and workshops, and plays matchmaker for entrepreneurs and manufacturers. The group has relationships with local manufacturing companies: When someone comes in with a great idea, SFMade has the experience and connections to help make it a reality.

One company, DODOcase, came to SFMade with the idea for a better iPad case. SFMade was in touch with a bookbinder that had been hard hit by the bad economy; when the two joined forces, an incredibly successful product was created. Now DODOcases are sold around the world, with several million in sales in their first year. Both DODOcase company and the subcontracted bookbinder have added new jobs.

That’s really the key to SFMade’s success, Lees says. "If our companies weren't creating jobs, we wouldn't exist." Want to bring manufacturing jobs back to your area? It won’t be easy, but it can be done.