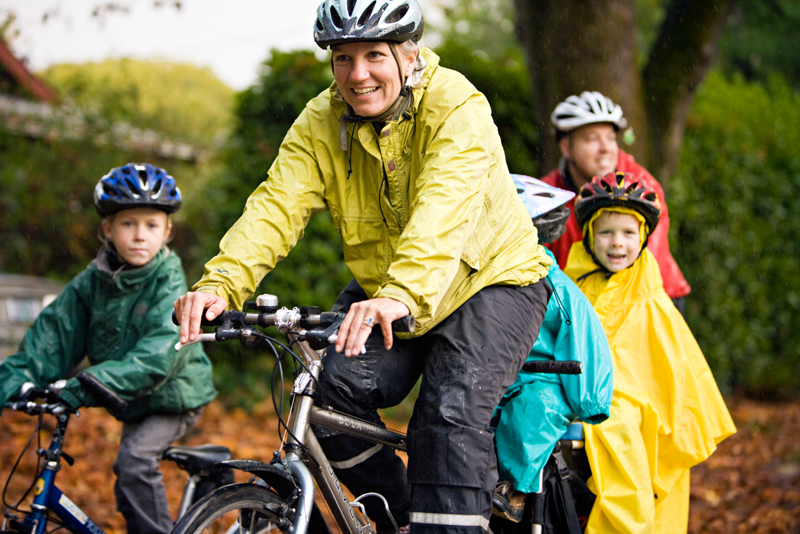 Paul Adkins rode a Yamaha 60 motorcycle when he was five and bought his first car when he was 14. Growing up in Kent, Ohio, he and his four brothers spent their weekends working on cars.

Now, at 44, Paul lives with his wife Monica and their four kids in Eugene, Oregon. They have a black Labrador, some chickens, and a two-story house near the Willamette River – but no car.

Two years ago, Paul and Monica sold their Toyota Previa minivan to go car-free. Paul works in a bike store and is the former board president of a bicycle advocacy group called Greater Eugene Area Riders (GEARs). He had wanted to sell the family car for a long time, but it was Monica who made the final decision.

“For so many years, when Paul would talk about going car-free, I kept thinking, but, what if…” Monica says.

Monica’s what-ifs weren’t what you might expect. She didn’t worry about how the family would handle a medical emergency, or get the kids to school in bad weather, or take their dog Josie to the vet. She was more concerned with how they’d go to the coast or Portland for a weekend or take their canoe up the McKenzie River.

“But one day I woke up in the morning, and I realized we’re paying into this really horrible system,” she says.

“We try to look at where our money goes and shop locally.” Paul adds. “When we give our money to gas or insurance, it doesn’t come back to us in any way.”

“It was like going on a diet and not drinking soda anymore,” Monica says. “We were divorcing the system.”

Paul and Monica aren’t alone. In October The New York Times reported that an increasing number of Americans are choosing to live without a car because of the recession and concerns about the environment.

Micheline Maynard writes in “Is Happiness Still That New Car Smell?”: “After more than a century in which an automobile represented the American dream, car enthusiasm may no longer be a part of Americans’ DNA.” 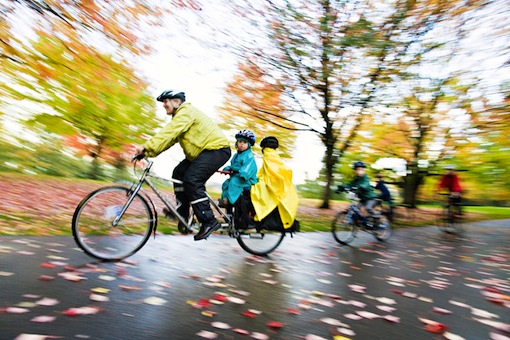 Bicycling as a way of life

Paul and Monica met on a mountain bike ride in 1994, and they’ve been riding bikes together ever since. When their oldest daughter Rainy, now 9, was just two weeks old, they secured her car seat into their Burley bike trailer and rode a few miles to meet with the families from their child-birthing classes.

The Adkins lived in Missoula, Montana at the time, and it was February. There was a foot of snow on the ground. “But Rainy was in such total comfort,” Paul assures.

Now the Adkins ride everywhere. They own 22 bikes, including a tandem, a triple, and BMX racing bikes for each of the kids.

They also own three Burley bike-trailers. And they’ve transformed Monica’s bike into a hauling machine with a device called an Xtracycle, which is a long hitchless trailer with a wide deck and panniers.

According to Xtracycle, the deck can be used to carry “your children, friends, or lovers.” The Adkins say it’s the perfect, wide platform for their youngest daughter, Sanguine, 4, to straddle right behind her mom. Sanguine has Down’s Syndrome. That doesn’t stop her from riding her own bike though. She has a bike with no pedals that she coasts on with a little help from mom or dad.

So what do the kids think about the family’s car-free lifestyle? According to their parents, Rainy, 9; Torrent, 7; and twins Dare and Sanguine, 4, rarely complain.

“Sometimes they talk about how far away things are,” Paul says.

“But once they’re in motion, there’s a little magic that happens,” Monica says.

Searching for the right city

The Adkins lived in several other cities before they moved to Eugene, including Missoula; Ithaca, New York; and Atlanta, Georgia. In terms of bicycling they agree that “Eugene is the best.”

Atlanta was the hardest city to get around by bicycle. Paul and Monica moved there before they had kids so that Monica could attend Life University School of Chiropractic. But even before they got to Atlanta, they knew living there was not going to be for them.

Their backyard butted up against an interstate that was ten lanes going each way. Paul drove 30 minutes each way to work, and if they wanted to do anything outside of their neighborhood, they had to drive. 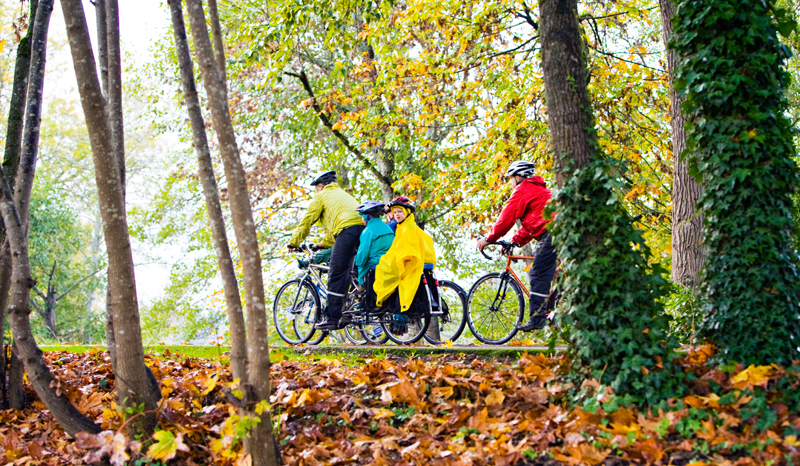 “The idea that the average American drives 87 minutes a day and what that means to their daily life. That is just not the way we want to do it,” Paul says.

So when Monica graduated from Life, she and Paul took two trips across the country in search of a bike-friendly city where Monica could start her chiropractic practice. It came down to Missoula and Eugene. The Adkins chose Missoula, and lived there for five and a half years until they moved to Ithaca, New York to be closer to family. In 2007 they moved to Eugene.

The Adkins are not surprised that out of cities with populations between 50,000 and 250,000, Missoula and Eugene rank number five and six for the number of people who commute to work by bike according to Bikes at Work Inc. And they’re thrilled that the League of American Bicyclists recently raised Eugene from silver to gold status on their list of bicycle-friendly communities.

But Paul and Monica think the City of Eugene could do even more to encourage bike riding. “In Portland (Oregon), every single elected official is riding a bike to work and to the grocery store,” Paul says. Portland holds the League of American Cyclists’ highest honor of platinum.

Some car-free advocates, like Chris Balish, author of How to Live Well Without Owning a Car

, tout the money-saving aspects of living without a private motorized vehicle. According to the Bureau of Transportation Statistics, car ownership costs the average American $8,095 a year.

But Paul and Monica say they probably spent closer to $2,000 on their vehicle, since it was older and Paul worked on it himself. But not owning a car helps the Adkins save money in other ways.

“It helps us bring home less,” Paul says. That’s important, because the Adkins intentionally live in a small house. “We don’t have enough room or money to buy things that only do one thing. The toaster is the only thing that has one job – toast.”

Paul and Monica say they stay closer to home these days, but they try not to let being car-free keep them from getting out.

Some days, when it’s raining or cold, getting on a bike doesn’t sound like fun, but Monica insists that once they’re riding, her attitude changes. “It feels good on my face and on my hair. My kids are giggling and talking and closer to reality. And we’re getting exercise. Everything about it feels really good.” 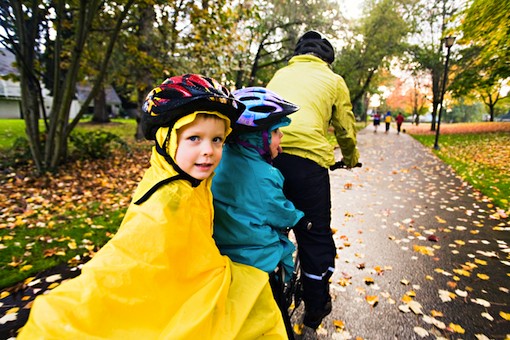 As a bike-advocate, Paul would like to see more people out on bikes. He also envisions a future where there’s an informal car-sharing network that allows people who are car-free to borrow cars from people who need to own them. Paul would prefer this sort of informal sharing to a for-profit network like the Zipcar system that operates in more than 60 cities, including Portland.

“Just walking up to a Zipcar, there’s such a consumer sensibility about it. It doesn’t connect you with anyone. It disconnects you even more. Borrowing a car changes the relationship between neighbors. It’s a huge sense of trust.”

Paul regularly borrows friends’ cars to go to Portland for meetings related to his bike-advocacy work. And a neighbor occasionally drives Paul and the kids up river with their canoe.

Paul and Monica hope their car-free lifestyle will inspire others.

“I think it’s easy for people to see us and think, well, if they can do it with four kids, I should be able to ride to school,” Paul says.