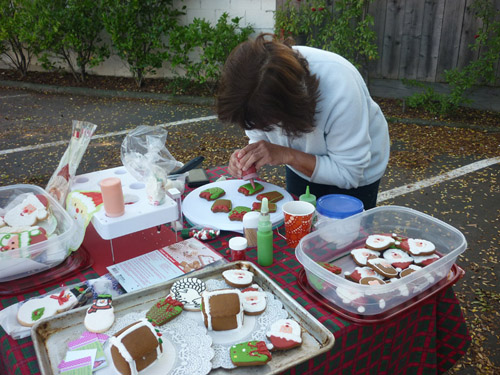 Inspired by the idea of building resilience around local, grassroots economies in response to peak oil and climate change, the transition movement has evolved into a global network of cities, towns, and neighborhoods that self-organize around the principles not only of reducing CO2 emissions but doing it by fostering happy, healthy, and creative communities.

The concept first emerged from British permaculturist Rob Hopkins, who looked at creative adaptations in the fields of energy production, health, education, economy and agriculture as a “road map” to a sustainable future for his hometown of Totnes, UK. Since Totnes adopted the initiative in 2006 and the Transition Network was founded in 2007, the model has spread to over 400 communities across the globe.

Sharing of all types is integral to any transition initiative. While Transition Towns from Bristol to Brisbane and from Peterborough to Palo Alto each have their own unique approaches for sharing, specific innovations are not confined to any particular locale.  They can be replicated by any community on the planet. “It’s not important that we have a project no one else has thought of,” says Bart Anderson of Transition Palo Alto. “What’s important is that we are encouraging a community which values sharing and contribution.”

With this in mind, here are the five most shareable and replicable Transition Town-style activities to bring into your own neighborhood.

Sharing food and gardens is to transition communities what patents are to Monsanto. “Anything involving food is a big hit among transition people,” says Anderson. The reason for this is not just because the transition movement sprang from the principles of permaculture or because we all need to eat to survive, but because according to Anderson, “food has always been at the center of community and solidarity for human beings.”

Giving and receiving the earth’s bounty is as easy as setting up a movie date or inviting friends to dinner. Transition Palo Alto, for example, organizes a regular garden share, a “free” backyard farmers’ market at their local community farm or garden supply center where people bring homegrown fruit, vegetables, eggs, herbs, or honey they have to share and take home something they don’t. Fruit and veggie swaps are popular and successful in all latitudes, from Transition Town Peterborough’s (Ontario) Purple Onion Festival to gatherings in Henley, Newport and Darebin across the Australian continent.

Under the motto “share what’s already there,” Transition Stratford in the UK has taken their Harvest Share into the local community, where members collect excess fruit from people’s gardens and distribute it to care homes, children’s centers, and churches. Using one of the most ancient forms of food sharing, Transition Sarasota’s Suncoast Gleaning Project has moved 75,000 pounds of fresh, local, organic, and tax-deductible surplus produce from local farms to their local Florida food bank. Talk about Gleaning for Good!

Perhaps the most unexpected yet natural place to plant a garden is a train station platform. Members of Transition Town Kensal to Kilburn followed through on their idea to build a help-yourself plot of fruits, herbs, vegetables, and even an apple tree on a London Underground tube platform to show people how easy it is to grow food anywhere. “We delight in the idea that a commuter can get off the train and pick a strawberry or a tomato and munch it on the way home,” says Michael Stuart of the Underground Tomatoes project. Inviting people to pick what they want from urban gardens in unusual and busy public spaces is not only about sharing food and fun, but about educating fellow citizens who’ve never grown food before on how to do it, and to do it together.

Making the best use of material things is not only good for a planet with limited resources, but for building meaningful communities. Whether you’re looking to barter crafts, books, clothes, or toys or you just want to meet other artistic people and clear out your closets, swap meets are the perfect occasions to balance both your material and emotional budget. Marsden and Slaithwaite Transition Towns (MASTT) in the UK encourage their communities to swap clothes, giving themselves new-to-them wardrobes. Transition Bloomington in Indiana saw their mission to cultivate “An abundant life without cash” come into concrete manifestation at their Spring Swap Meet. Lots of DVDs and play station games changed hands among the kids while the adults got busy swapping all sorts of clothes, kitchen equipment, and a push chair at Transition Town Hebden Bridge’s (UK) Swap Shop. The NE Seattle Tool Library will launch in January and provide free, community access to a wide variety of tools, training, and sustainable resources.

Transition Palo Alto has been doing a clothing exchange twice a year for the last four years, but it’s their Craft Swaps and Sharing Expos that take the swapping to another level. At their recent Holiday Sharing Expo I got to see first hand what’s possible when people come together to exchange gifts, crafts, stories and ideas. From clothes laid out on a tarp to a table full of toys, from Tom Kabat’s wooden bike creation to Connie Beal’s cookie decorating demonstration, from Willi Paul’s Transition Tales to Herb Moore’s Scrapophony of instruments made from glass jars, PVC pipes, tuna cans, and a set of old keys, the event was like a demonstration project for life after cheap oil and quarterly profits. 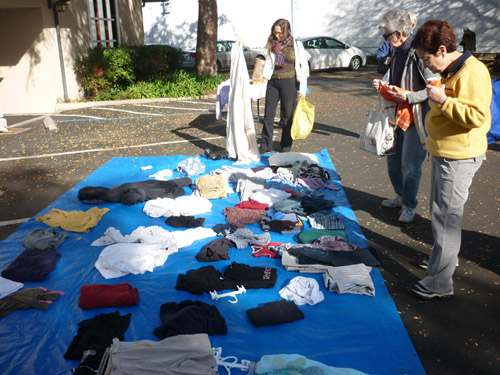 Rani Jayakumar, one of the driving forces behind the TPA swaps, explains their organic evolution. “Two years ago we did a Christmas event because there wasn’t enough produce to share,” Jayakumar says matter-of-factly. “So we thought why not enlarge the scope and include crafts and Christmas decorations, in case people were tired of certain things and wanted to swap them out? Six months later we did another one in the summer, then other people got ideas and carried it on, and it just kept on going from there.”

Even more so than trading things, a huge key to a resilient and vibrant community is the free exchange of skills, knowledge, and wisdom. While Skill Sharing is not a Transition Town invention per se, the idea of Reskilling is very much native to it. From bicycle maintenance to sowing, seed saving, or whistling with two fingers, the art of relearning lost skills and knowledge goes to the core of creating a less wasteful and more thoughtful world. “The Reskilling fairs that a number of Transition Initiatives do are exceptional ways to share skills and passions,” says Carolyne Stayton of Transition US. “People who have a passion and skill in, say, beekeeping, composting, tool repair, canning, or raising chickens come together and teach these skills to those coming to learn.”

Of course, the ability to grow and prepare food is one of the most useful and easy to learn skills there is. Transition Bay St Margaret’s (Nova Scotia) educational vegetable garden project teaches the community how to convert lawns into ‘insta-gardens’ that can be installed without breaking the sod. Palo Alto transitioners have learned how to build Hugelkultur raised garden beds. However, according to the group’s Slow Food aficionado Peter Ruddock, some of the most fulfilling skillshares have taken place in people’s kitchens and can be done on short notice and without much fanfare. “We did plum jam. Our lemon marmelade this year was a smash hit. We did a squash party where people brought a different kind of squash recipe and shared it with everybody.”

Repair Cafes are another natural fit for transition towns. Originated in the Netherlands, Repair Cafes link local handy people to folks in need of all kinds of repairs. Whether it’s clothing, appliances, bikes, furniture, or electronics, visitors bring their broken items from home and with the help from the specialists learn how to fix their broken belongings. Transition Northeast Los Angeles has already staged three successful Repair Cafes, where they “share time, skills and talents to build a more vibrant local community one repair at a time.” 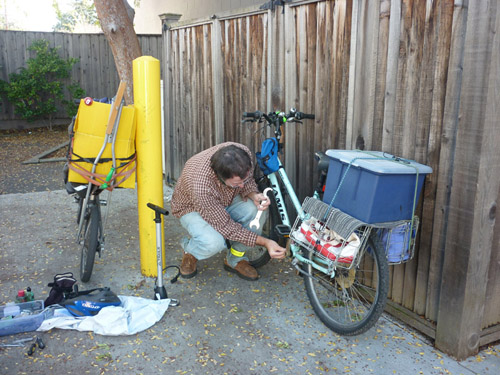 Once you are sharing food, things, and skills, you are already well on your way to creating a local, fair, and equitable economy. However, no matter how intimate you keep your inter- and transactions, you are still trading in anonymous currency — money — often tied to institutions directly tied to and feeding the problems you’re trying to solve — big banks. Community Currencies and Timebanking are the antidotes to big business, global markets, and financial speculation, and transition initiatives are at the pulse of the movement towards reacquainting ourselves with the true meaning of value.

In England, transition-inspired Brixton, Stroud, and Totnes Pounds have been followed by the Bristol Pound, the UK’s first citywide local currency with electronic accounts managed by a regulated financial institution. In South Germany, the Chiemgauer is now accepted by over 600 businesses in the Rosenheim region covering about 500,000 residents, and growing. Transition Bay St. Margarets is about to introduce their own Bay Bucks and Karats. Transition Sarasota’s Common Wealth Time Bank sets an example of how people can be rewarded for sharing their skills and passions.

Pulling it all together, The REconomy Project is a real life economic laboratory run by the Transition Network to help build the capacity of Transition Initiatives and other community organizations to grow a new kind of local economy.

The easiest thing that transition people share, with perhaps the most impact on society, is each other. Coming together for community conversations to share experiences and find answers to your questions is what author and transitioner Cecile Andrews calls “living room democracy,” an approach to learning that helps create a shared world view and inspires people to work for the common good.

Transition Cafes from Cambridge and Liverpool to the Pacific Northwest and Palo Alto are the embodiment of living room democracy. Anybody can host. According to Transition Palo Alto member William Mutch who has organized several gatherings, you just say, “I’m gonna have a Transition Cafe on a certain topic and sit in the cafe for a couple of hours, so come and talk.” People can offer themselves as experts who would like to share information or as lay persons who would like to learn, or just come and join the conversation. Mutch says that by the third gathering, about 70 percent of the attendants were people he had never seen before, ranging in age from twenty somethings to folks in their 70s. “It just blew me away. We’re just trying to branch out and see what works.”

Bart Anderson thinks that not having your own space is a perfect starting point for anyone to start a sharing project, because it forces us to reach out and connect with others. “We’re not just sharing things, we’re sharing ideas and people. Just to be around people who listen makes all the difference in the world. I’ve found that as a result my average mental health has gone up. All the facts and the skills are nice too, but for me the ideas and the people are the real core.”