Another Way of Sharing the Big Stuff - Shareable
Skip to content 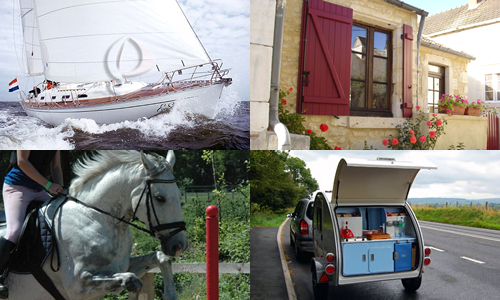 Explaining rental sharing is easier if I use a couple of examples:
Horse sharing is one of the commonest forms of fractional rental.  If the owner cannot ride their horse often enough, they look for a like-minded person with the right riding skills to ride their horse once or twice a week, every week.  The rent is usually relatively small, say £20-50 a month (approx $30-75 a month.) Sometimes there is no charge, but the sharer takes on some grooming or poo picking duties as recompense.
Monday to Friday rentals are increasingly popular and are similar to taking a normal lodger, except the tenant only stays for 3-4 nights in the week, leaving the landlord with the house to themselves at weekends. The tenants are usually people working away from home either permanently or on long contracts.  Generally the Monday to Friday rent is about 70-80% of the equivalent full rental, but it varies considerably with local supply and demand.
Generally rental sharing income is less, and often a lot less, than the cost of permanent rental or hiring as series of short lets.  The owner is content to do this because they are simply looking for some income, almost any income, to offset running costs, rather than making a return on their investment.  They are trading income for convenience and the “right” person to share with.
Once one has understood the concept of rental sharing, it can easily be applied to other assets, particularly houses, boats and motorhomes.  My original reason for creating yours2share arose because I wanted to find like-minded people who would rent our holiday home for every second or third weekend.  We visited our cottage in Suffolk, UK, every other weekend – heavy use compared with many second homes in the UK, but it seemed wrong to me that it should be unused for 25 days a month.  I convinced my partner that if I could find the right couple to share it with, we could accept about £250/month for two weekends/month use.  This was attractive to potential sharers because permanent rental of the same cottage was £475/month unfurnished, plus bills, and holiday lets were £250-400/week depending upon the season.
I blithely went online to advertise and found this type of rental simply didn’t exist.  Then by coincidence I saw people advertising for sharers in the quarterly magazine of a club of which I’m a member.  I contacted some of them and found that they were setting up exactly the type of sharing arrangement I wanted.  I was relieved to find that I wasn’t crazy.  I advertised and we met a couple who would have been ideal partners.  In the end the arrangement didn’t go ahead, because I decided to leave my job and start yours2share, and we needed to rent the cottage permanently.  But I realised that there was a practical way of sharing large assets that was being completely overlooked.
Rental sharing of second homes is still in its infancy, but those who have tried it are very positive.  One example is Sheldon Manor in Wiltshire.  Caroline Hawkins lives in the manor which also has a large separate wing and four cottages.  Caroline runs weddings from the manor grounds and the wing and cottages were permanently let until three years ago.  By chance all the tenants left within a short period and she decided to try rental sharing, and also allow the cottages to be booked as part of the wedding packages.  This enabled Caroline to control how the properties were maintained and to pick and choose who stayed there.  The rental sharing is done on the basis of hiring 8-10 weeks per year and she currently has several couples doing this: two families have just signed up for the third year.
Whenever I get ads for rental sharing on yours2share there is immediate interest and not necessarily from the kind of people you think might be looking for a vacation home.  As our lives become more complex, there are many people who need a base away from their main residence, for example people who regularly visit elderly relatives and fathers visiting children who live with their mother.  Many people drive long distances each way in a day to make these visits, or sleep on a friend's couch: staying in a hotel is expensive and/or soul destroying.
The key to a successful rental sharing is to invest sufficient time at the beginning establishing like-mindedness and agreeing every aspect of the arrangement. It is also wise for the owner to take up both employers and character references.
The issues for discussion are similar to those for joint ownership.  Fundamentally the holiday home example is a repeating holiday let, so the contract is basically a holiday letting contract with a set of dates or method of calculating dates at the beginning.  Usually the contract is for a year.  There may be a few additional clauses that wouldn’t appear in most holiday lets, such as where each sharer stores clothes, food, walking boots, or sports equipment.
Although I’ve written about sharing houses and horses above, I think boats and motorhomes are obvious candidates for (say) a week or weekend a month arrangement.  The owner generates income to defray the running costs and the assets are used: neither boats nor motorhomes benefit from being left unused for long periods. Many boat owners only consider chartering their boat if they want to generate some income, just as many second home owners only consider holiday letting.  Thess models have many drawbacks: high marketing costs and the fear that your beloved boat/vacation house is being thrashed.  Rental sharing provides a steady income and allows the owner to choose who they allow into their home.  Furthermore because the sharer returns over and over, human nature means that they tend to take much greater care of the asset.

Sophie is the founder of yours2share which helps people to find suitable like-minded partners to share just about anything, anywhere. Assets shared include property, boats, cars, motorhomes, horses, dogs,

Sophie is the founder of yours2share which helps people to find suitable like-minded partners to share just about anything, anywhere. Assets shared include property, boats, cars, motorhomes, horses, dogs, gardens and aircraft. Sharing methods are joint ownership, part-time rental or simple shared use with no payment involved. Sophie also runs a women's networking group (WiRE) and a co-working Jelly in Norwich, Norfolk, UK.