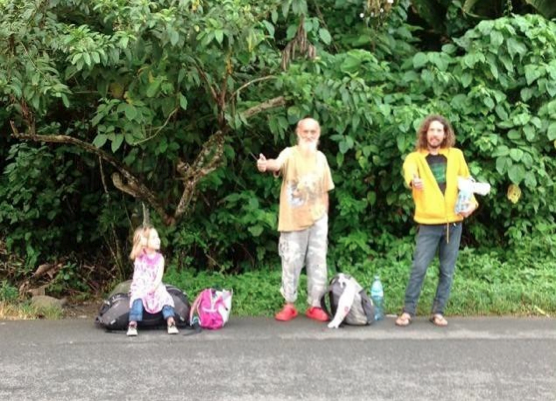 With hundreds of hitchhiking experiences under my belt in more than twenty countries around the world, the art of the hitch has become practically second nature to me. I’ve inherited a practice that began in the early 1920s and came into vogue in the ‘60s and ‘70s when folks like Bob Dylan, Ramblin’ Jack Elliott, and Janis Joplin took to the roads. Hitchhiking became less popular in recent decades, but with the rise of the sharing movement, it’s time to bring hitchhiking back.

The following guide comes from over a decade of experience on the road. You can use it to start your own hitchhiking career.

A successful hitch is all about PMA, a positive mental attitude. I learned this when my friend Wiley Lewis and I were spotted riding a piggyback (a flatbed train car with a semi-truck trailer on top) on the Union Pacific High Line just outside of Boise. The train slowed to a stop and two Idaho State Police officers approached our car from both sides and sent us on our way. Hitchhiking was against the law, they said.

We were fifteen miles from Boise when we started walking, and lo and behold my new mantra—“somebody is gonna stop and pick us up, somebody is gonna stop and pick us up…”—worked!  A car pulled off in front of us, and I opened the door. “The police told us not to hitchhike,” I said. In response, the driver said, “I answer to a higher power. Get in.”

Before you hit the road, develop your PMA. In my experience, it’ll get you off the side of the road and into a car in no time at all.

A light bag is practical, though you might not realize it until you set out on the road. I once bought a huge stack of books in England and then flew to Sicily where I planned to read them in a small village called Piazza Armerina. With an extra thirty pounds on my back, hitching from the airport to the village was the longest short journey of my life. You never know when you might have to walk a mile or two, and, trust me, in those moments your bag will feel heavier with every step.

Don’t be afraid of your first hitch, or you might try to talk yourself out of it. People commonly tell themselves that they’re too old or that it’s too dangerous or that you have to be moneyless to hitchhike. These things aren’t true. Bottom line, hitchhiking is about sharing. Sometimes it’s about sharing space in silence, and at other times, it’s about sharing stories. But it’s always about strengthening community.

Listen to your intuition

Common sense and intuition are your greatest allies on the road. Many people don’t ride the subway alone after dark, and you should apply the same reasoning to hitchhiking. People likely can’t see you, or if they can, their common sense probably tells them not to pick up hitchhikers after dark. Whatever the case, if it feels right, go for it. If it doesn’t feel quite right, listen to your intuition, and don’t do it.

To catch a ride, you will need to get to the edge of town where the traffic is headed your direction. The more traffic the better of course, but you can't hitch directly on the interstate, so you will have to choose a smaller state highway or an on-ramp. (You can find more information about where to stand in towns around the world at HitchWiki.)

Some people ask for rides at truck stops, gas stations, or rest areas. I prefer to stand near the road because that way I don’t feel like I’m imposing on anyone. If you go the road route, make sure the traffic is not going more than around 35 miles per hour. People need enough time to see you and make the decision to stop. You should also stand near a turnout where cars can safely pull off the road. You don’t want anyone stopping in traffic.

Stick out your thumb

We all know the classic hitchhiking sign, right? The thumb’s up. It’s universally understood in western culture, however in Asia and much of South and Central South America you should make a fanning gesture with you hand (as if you are petting an invisible dog on the head) or simply point down the road in the direction you want to go instead. You might also try “flying a sign,” by simply writing the name of your destination on a piece of cardboard. If someone is headed to your destination, they are more likely to pick you up.

Be aware that in less developed countries, many ordinary cars double as taxis. If you don’t have any money, let the driver know right away. If you do have money, it’s nice to offer a fare even if they don’t ask, but don’t offer more than what regular cab fare would be in that country. Be considerate of others needs, and rest assured your needs will be met too.

Eye contact is a good idea. It might help you get a ride, but it also makes the wait more fun. When you meet the eye of a driver with a smile on your face and a song in your heart, you can catch a glimpse into their world.

Remember, there are no rules, only guidelines. It’s okay to experiment. I’ve been picked up while standing, walking, running, and even while riding a bike. Boats in Guatemala and Coptic monks in the Egyptian desert have picked me up. I’ve even been picked up by RVs, motorcycles, semi-trucks, and a limo. No ride is impossible.

In general, it doesn’t make sense to hitch unless you have a large distance to cover. Walk, bike, or take public transit if you’re going a short distance. These options are usually easier than hitching when they are available.

Be aware of your situation, and take the following precautions. Let someone know where you are going, when you expect to get there, and that you have arrived safely. Carry a mobile phone and identification with you at all times. Use roads that are heavily travelled. Always make a mental note about the person who offers you a ride and their vehicle. Share information about suspicious persons with the police. Most importantly, trust your instincts. If someone makes you feel uncomfortable, don't get in the car.

If you like planning in advance, there are a number of rideshare resources on the Internet you can use to arrange a ride ahead of time. Craiglsist and Carpoolworld are global, but there are local resources as well, such as Ridejoy for the Pacific Northwest and Mitfahrgelegenheit in Germany.

You never know how things are going to work out, but that’s half the fun. So just listen to your heart and follow your feet. You will get where you need to go, and one thing's for sure: you will have great stories to share. Hitchhiking is more than getting a ride. It’s a relationship that could last a few seconds or a lifetime.

A drifter of many years through dozens of countries around the world, Paul has observed many cultures in the search for the cause of happiness. Both the village economies of

A drifter of many years through dozens of countries around the world, Paul has observed many cultures in the search for the cause of happiness. Both the village economies of the 3rd world and the Wall Street economy of the west have their shortcomings. This new collaborative economy is bridging the two in a way that builds healthy sustainable economies that promote partnership over dominion. It is Paul's aim to share what he has learned in an attempt to help the new economy grow.