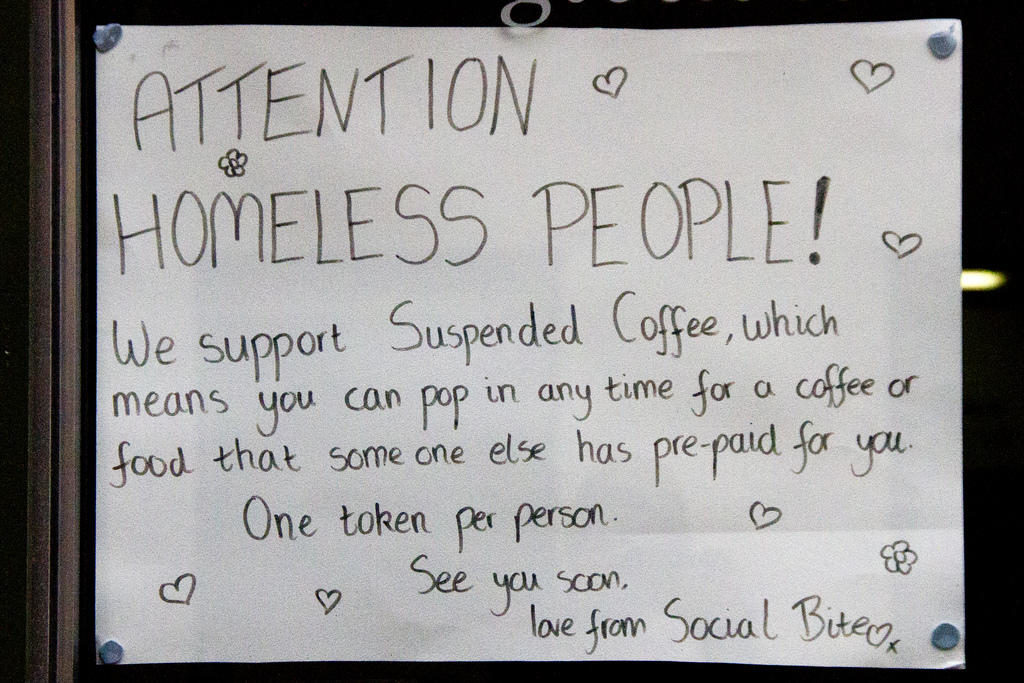 Can offering a free, hot coffee to someone you don't know make the world a better place? The people at Suspended Coffees seem to think so. The century-old tradition comes from Naples, where it's common to order a coffee for yourself and pay for a second one for a needy person to drink sometime in the future.

The discovery of this anonymous charitable ritual by John Sweeney led to him to start a Facebook page about the initiative which quickly gained over 100,000 likes and led to the creation of a website.

One of the first adherents to the revamped scheme, a coffee shop in east London, gained media attention by appearing on the BBC. Soon thereafter, Starbucks UK started their own version by matching each "suspended" coffee with a cash donation to the already $340 million strong (according to the UK government's #opendata platform) Christian charity called Oasis. Another spin-off came out of Italy, which turns your "suspended coffee" into a crowdfunding donation for social initiatives that they choose.

How does one collect a suspended coffee? Easy, you just go to a café where you see the "Suspended Coffee" sticker and ask if there's a coffee waiting for you. Numerous cafés around the world have since joined the initiative, each slightly modifying their mode of participation to fit local culture. I discovered that it had even reached Greece, where a publication called The Raft has been championing the movement by signing up about 40 coffeehouses, so far. 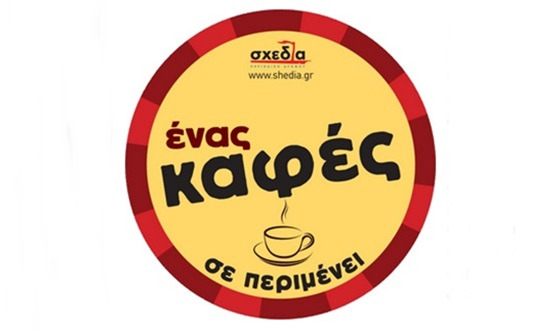 Σχέδια, which more closely means "life raft" in Greek, is a magazine produced and distributed by the homeless in Athens, much like the better known Big Issue in London. They have started a Hellenized version of the campaign called "A Coffee Waits for You."

Cafés displaying this sticker not only will provide those in need of a free beverage with some coffee, they also double as a safe haven where no one is discriminated against; that's a very important side effect given the current state of politics in Greece where a violent Neo-Nazi gang has taken to roaming the streets in search of victims to abuse and even kill.

Under this Greek variant of suspended coffee, the "free" coffee that you purchase in advance comes with a 35 percent discount. This could account for its rapid success in Greece, or perhaps it's the fact that this way of giving directly to people, with no complicated bureaucracy getting in the way, is more rewarding. It also appears that the cafés displaying this symbol become a neutral zone, welcoming people with financial problems to come have a coffee and chat about their problems, taking the taboo away from poverty and creating a small, non-commercial zone in the consumerist obstacle course that prevents people from socializing.

Next time you are traveling abroad and looking for a café with WiFi and good cappuccino, why not check to see if they are also serving Caffè Sospeso to those who aren't on vacation. Or see if your local cafe serves it.