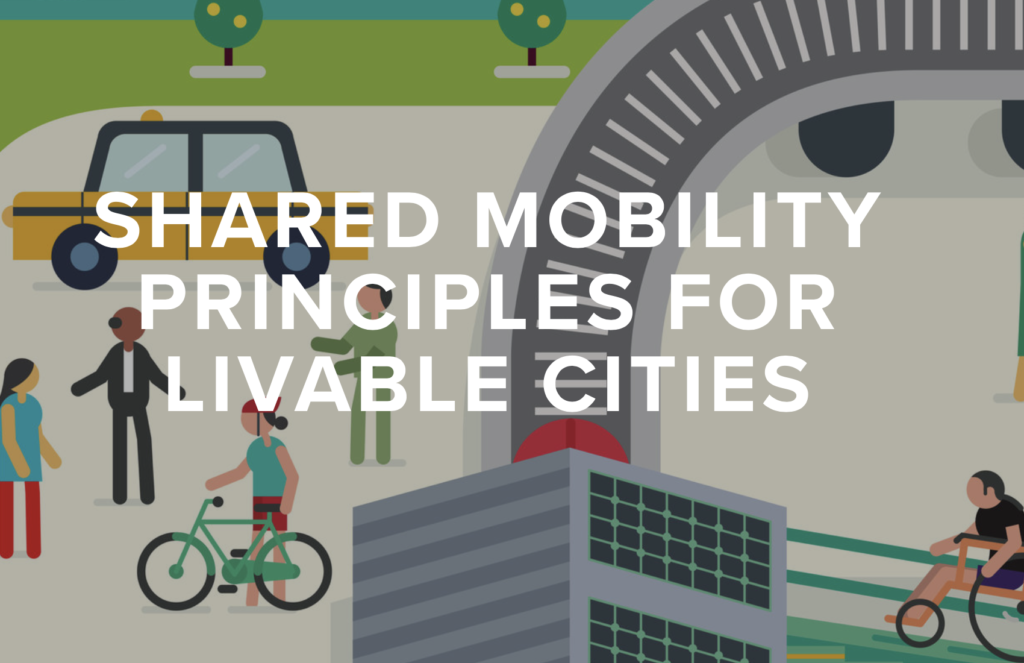 From the global growth of bike sharing to the wave of dockless e-scooters, city transportation planners are increasingly having to account for decentralized transportation options that did not exist even just a few years ago. In order to aid cities, a coalition of nine NGOs, including the World Resources Institute, Local Governments for Sustainability, and the Natural Resources Defense Council, released the Shared Mobility Principles for Livable Cities last year. The report covers broad agreed concepts that proponents believe should form the basis of any city's transportation planning. It includes principles around equity, fair use fees, open data, integration, and more. Within a year, the principles had governmental partners around the world and had brought diverse private sector actors on board, including the carpooling app BlaBlaCar, transit apps CityMapper, bike-sharing companies such as Motivate, and Uber and Lyft.

We spoke with Robin Chase, a shared transportation expert and former CEO of the car-sharing platform Zipcar who helped develop the principles, to learn more about how they are helping cities adopt better policies aimed at addressing transportation and mobility challenges.

Nithin Coca, Shareable: Can you tell me a bit about your background, and how you became the initiator for the Shared Mobility Principles?

Robin Chase, shared mobility expert: I've been working in the area of transportation for the last 20 years as a transportation entrepreneur. For that, I do a lot of policy talks around the world. During those travels, some of the private sector transport companies were telling me that they were getting yelled at from cities for doing the wrong things, but cities had not told them what they wanted, and hadn't published what their goals were. I heard likewise from cities and people who were consulting to cities that cities didn't know what their objectives were.

I felt that around the world there was this huge amount of really great work that was going on but that there was not a clear unified voice coming from city advisers – NGOs, private consulting companies, and academics [at] universities. So I thought we really needed something much clearer in the transport sector.

So I convened ten of the world's largest city and transport NGOs together, and I gave them a straw man of some principles. I said we're all coming from these from different sectors and different places around the world. There must be pieces of advice on which we all agree. The goal was that these principles have to be things that apply to 90 percent of the cities worldwide. What's good for Bloomington might not be what you would recommend for Mumbai. So what do you recommend that fits every one of those cities so it had to cross the whole range of cities? There ensued seven months worth of bi-weekly three hours videos calls, heavy wordsmithing, and discussion.

So we wrote these over the course of seven months, and in November of 2017, we launched them at an ICLEI world's eco mobility conference that was in Taipei. There were 600 mayors there who said they agree with these principles.

What are the goals of the principles in terms of policy making or planning? Since they were released, have you seen progress towards these goals?

Technology made sharing simple, technology made Zipcar possible. It made transit apps possible and it made real ride sharing — Uberpool, LyftLine, VIA, and Chariot possible. So the whole sector are tectonic plates that are shifting and in motion and what's very, very clear to me is that these plates are going to cool. And when they cool we need them to have cooled on the side of cities that are predominantly biking, walking, shared modes, and zero emission.

This effort is to say and declare that's where we're going. So if you look at the shared mobility principles there's a little paragraph up top that says, "Sustainable, inclusive, prosperous, and resilient cities depend on transportation that facilitates the safe, efficient, and pollution-free flow of people and goods, while also providing affordable, healthy, and integrated mobility for all people."

I really love the fact that all of these entities have signed on and agreed for that vision statement, because right now cities everywhere around the world prioritize and underprice the true costs of driving a personal car. We want to create a level playing field where all of travel modes are getting taxed or regulated equally, so that when a consumer steps into that place they can make more rational decisions.

Have there been any interesting, or surprising use cases of the principles thus far, or ones that particularly excite you?

And so people who have signed on to those principles, both public entities many private sector companies and many of the NGOs, have together written letters to the mayors of those cities, and in New York's case to Governor [Andrew] Cuomo, to say, "Hey we know you're thinking about congestion pricing, or about putting new taxes on TNCs and taxis, here's our recommendations based on this large group of entities that are both nonprofit and for-profit. You should be thinking in these ways when you make those decisions." That was a really a great way that the principles were put to use.

Another example, I talked with the Smart Cities Council in Australia and New Zealand, about three months ago. They said, "Robin, we love the principles, we're starting to pull together cities in Australia and New Zealand to think about building more livable and sustainable cities, and we want to use the principles." I gave a talk by video to this group of people who are working for government in those cities about the principles and how they fit into what they want to take on.

We think of the principles as open-source. Anybody can take them and run with them. You don't have to ask for permission. That's what the Smart City Council did. They took this idea they ran with it.

Have you updated or changed any of the principles based on feedback, or experiences, since they were first released? How come?

I think we’re unwilling to change them for a while right now because we're all happy with the language. It was very carefully wordsmithed and we factored in cross cultural communication too.

One thing that was often pointed out to me that safety didn't get a higher level. I feel like safety is embedded in many of these principles, but it didn't get called out specifically. I take that as an interesting piece. For principle #10 [We support that autonomous vehicles in dense urban areas should be operated only in shared fleets], we got a lot of pushback from some car and driver zealots. I think first off I can guess that with a you know a 90 percent accuracy you don't live in the dense metro area. So why are you worrying about it? We finally had to write up number 10 as the only one that has a "why" beside it.

What next? How do you want to see the principles evolve and be used in the future?

It's been really exciting to me that the principles have really resonated and that people around the world are feeling happy that that they exist and are an important addition to this space. I think there's a lot more that we could be doing with them… education of people who live and work in cities about the different moving parts and how transportation relates to the built environment or congestion or sustainability or livability or access. We want to build a learning toolkit that you could share around the world, so mayors and different stakeholders can do something with it. Around each of those principles I'd like to show how can you implement them and that's going to require.

Ultimately, where I'd like us to be is going towards a walking, biking, shared mode, clean zero emission dominance of city streets and public and private infrastructure investment. Whereas today planning and infrastructure is private sector, internal combustion engine car dominant. I'd like to switch that around.