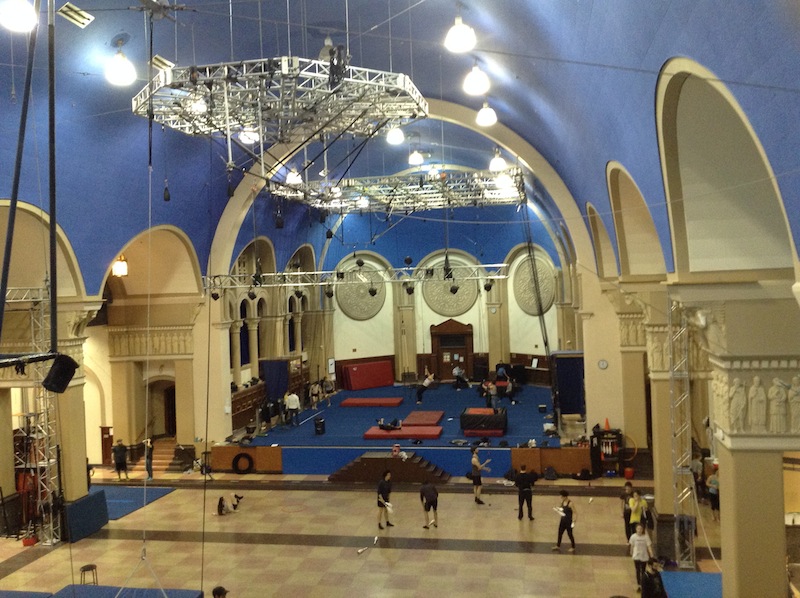 The novelist Mark Twain is said to have referred to Montreal as a city of spires, writing that "you couldn't throw a brick without breaking a church window" in Canada's largest French-speaking city.

"In Quebec cities, the church is the landmark," historian Paul Mackey says. "In Europe you have castles — here, we've built churches."

From the arrival of the first French settlers in the 1600s to the last half of the 20th century, the Catholic Church and the rest of society in Quebec were tightly intertwined in a way difficult to imagine in the rest of North America. Hospitals and schools were church-run, and priests played a key role in political and family life in the province.

"Since many people finished school in grade nine, the priests, who were more educated, became social and political leaders," Mackey says. 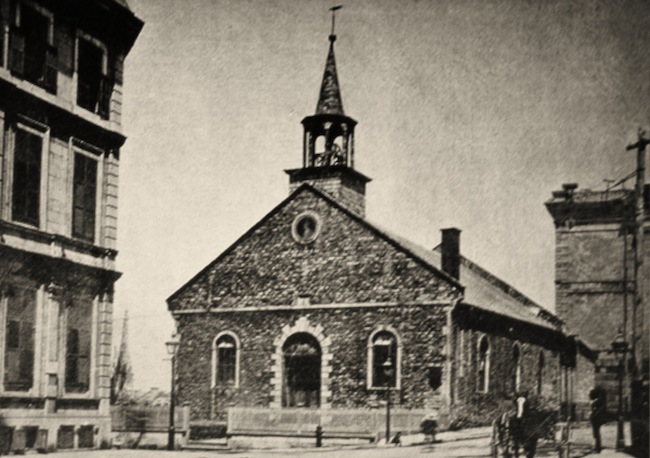 A wave of nationalization and secularization in the 1960s, known as the Quiet Revolution, upended that dynamic almost overnight. "This was also the time of the birth control pill and the Second Vatican Council which called for the church to be more open to the world," Mackey says. "At the same time there was a political transition in Quebec, which put hospitals and schools in the hands of the state, and made higher education available to more people."

As a result, church attendance plummeted, from more than 80 percent in the mid-1960s to nine percent in 2012, according to a study by University of Ottawa researcher Sarah Wilkins-Laflamme. Data from the Quebec Religious Heritage Council shows that between 2003 and 2016, one in six Quebec churches closed its doors. By the late 20th century, many of the buildings had fallen into abandon and disrepair.

"Two hundred and thirty-three churches still belong to us, but since 1980 we've had to sell 42," says Rémy Gagnon, head of the department of buildings and religious heritage at the Quebec City regional diocese, the second largest in the province. "You can see the rhythm that we're talking about."

But now, with the support of municipal governments, residents, and religious leaders, some of these centuries-old churches are in the process of being transformed into community hubs and cultural centers. And it's not just Catholic churches. Anglican and other Protestant churches are also changing, Mackey says, pointing to St. Michael's Anglican Church, now a library, and the former Lévis Anglican Church, now a concert hall appropriately baptized L'Anglicane. Mackey has observed several innovative church conversions, often to libraries or concert halls.

"I know of one church in Shawinigan [between Montreal and Quebec City] that was turned into a bar called The Confessional," he recalls. "Unfortunately, it didn't last very long."

Of Quebec City's four "giant" churches, two — Saint-Jean-Baptiste and Saint-Charles — have closed in the past ten years. A third, the Quebec Basilica, remains open, but a nearby Augustinian convent has become a health resort. The fourth, Saint-Roch, still holds regular masses. However, it has rented out spaces which once held reliquaries, to local fashion designers and to a nonprofit that operates a communal food fridge. Another vast church, Saint-Esprit, which closed in 2000, now houses the Quebec School of Circus Arts.

Conserving the church as a gathering place is a top priority for Edouard Blanchet, coordinator of Espaces d'Initiatives, a citizens' group working on the transformation of Saint-Charles. That building, in the heart of the working-class neighborhood of Limoilou, has sat empty since its closure in 2012.

Blanchet, 29, talks with overflowing enthusiasm of plans to turn the church into a coworking space with a café, a neighborhood history exhibit, a daycare, and a small public garden with a play area.

"There is a lot of concrete in this neighborhood; it traps heat," Blanchet says. "The garden will be amazing in the summer." 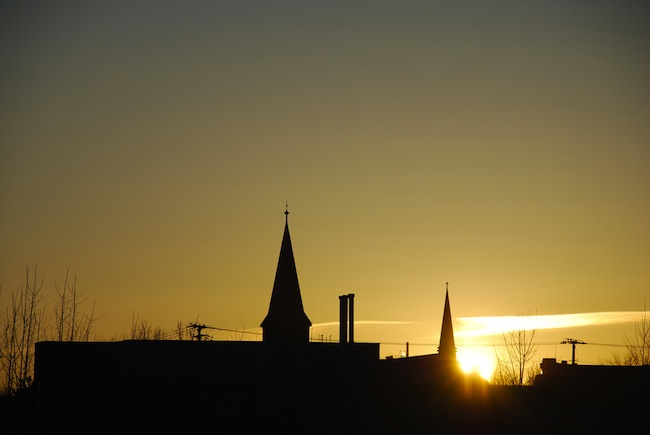 Sunset in Limoilou. Photo by Caroline Gagné via Flickr.

In summer 2016, Blanchet and his colleagues organized a series of concerts and set up a sidewalk café and a small edible herb garden in front of the church, as a precursor to their plans for the interior. Their plans already have the support of the parish priest, who holds the keys.

"We want to make the place profitable, but keep it open for everyone," he says. "This building was maintained for decades by the nickels and dimes of people's offerings, and it has to continue to belong to them."

Blanchet estimates that in two years, the building inspection, the technical plan, and the business plan needed to get the center running will be complete. He hopes the multi-purpose center will be a unifying force for his neighborhood, which is torn between its working-class roots and a wave of recent gentrification.

"We want it to be intercultural, intergenerational, and inter-class," Blanchet says.

Through his multifaceted business, he wants to maintain the church and create opportunities for neighbors to meet. Blanchet is hoping to receive city funding and crowdfund more extensively once his business plan is complete.

"These buildings have lost their initial purpose, but we can't lose them," Blanchet says, adding, "Just doing this is an act of faith — but you've got to believe."

Preserving the space also matters to the Monastère des Augustines in Old Quebec, which was founded in 1639 and housed more than 200 nuns at its peak. As recently as 1958, a new wing wasbuilt onto the vast structure adjacent to the Hôtel-Dieu hospital, the oldest operational hospital in North America. Now, only 11 nuns and a postulant live on the site. Excluding the postulant, only one nun is under 40 and most are over 80. As the world of skilled professions opened up to women, becoming a cloistered nun, once the only way to work as a nurse or teacher, lost its appeal, explains museum guide Amélie Nadeau. "As early as the 1970s, the nuns were contemplating what to do with all this space," says Nadeau.

The remaining nuns live in one wing of the monastery; the rest was ceded to a trust and now houses two museums, a historic chapel, meeting and concert spaces, a restaurant with an emphasis on local food, and a health retreat. Nuns' cells have become small but cozy hotel rooms. It opened in 2015 after an investment of $41 million, a combined investment by the Canadian government, Quebec's provincial government, Quebec City and the Augustine order. 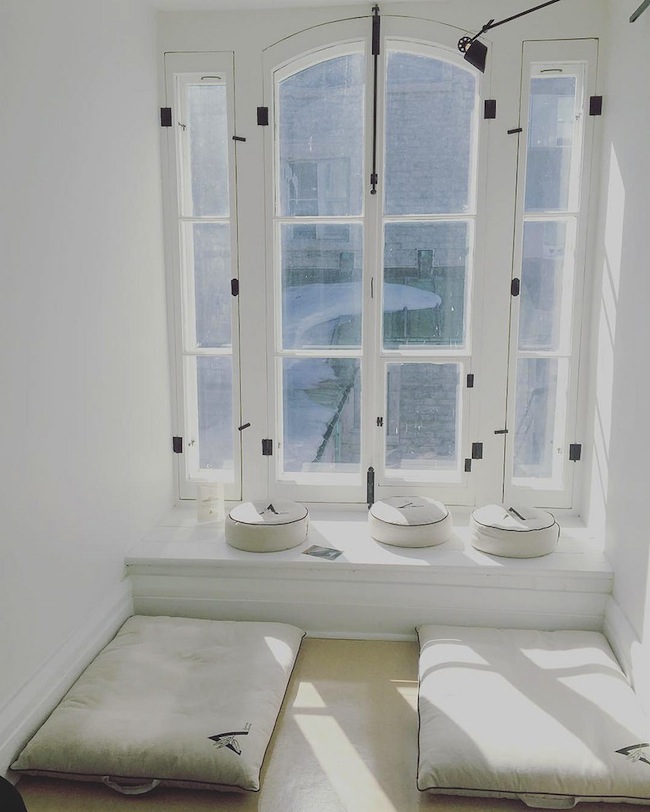 An inside view of Monastère des Augustines. Photo by Museomix Quebec via Flickr.

"The sisters wanted the monastery to be a public place, to mark their legacy of serving the public, and to have a mission to sustain people's health, because they were nursing sisters," says project manager Denis Robitaille.

Guests stay for 3 to 14 days, wandering the vast, serene halls, attending daily yoga sessions, feasting on healthy, local fare, and going to the occasional concerts, which are open to the public.

"For the past 20 or 30 years in Canada, people have been dealing with stress, anxiety, overwork, and over-connection," says Nadeau. "People come here to learn how to breathe, how to meditate, how to feed themselves. Although we're not a religious retreat, the chapel is open for people to pray or sit in silence. We want people to slow down, and everyone does that differently."

From Church to School of Circus Arts

Slowing down, however, is not part of the plan for the Église St-Esprit, now the Quebec School of Circus Arts. The church closed in 2000 and reopened as a circus school in 2003. Several hundred students, from kindergarteners attending after-school programs to professionals in their 20s, learn the finer points of clowning, juggling, dance and trapeze artistry. Half of the older students come from outside Canada. Dozens of schoolchildren attend after-school programs that mix tutoring in school subjects with circus arts. The school's annual "circus days" festival draws thousands. 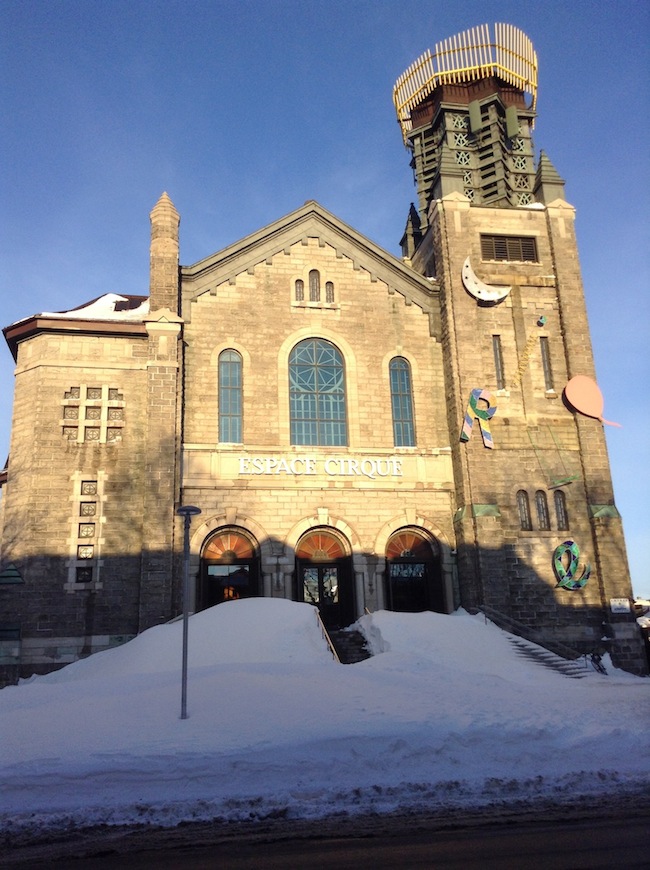 "We needed a new building, and the bishop wanted to let this church go," explains the school's director, Yves Neveu, whose office is in the former baptistery. "I took a look inside and said, 'You can't close this beautiful place.'"

Where the organ once sat, aspiring acrobats stretch on padded mats. A juggling class is underway in the old wedding chapel and trapeze artists fly above the altar. Anyone can come and watch the students practice. "Every now and then, someone will poke their head into the wedding chapel and say, 'I got married here.'" says Neveu.

"We hired an architect, and worked with the church to remove all the relics and things like that; we installed the supports for the trapezes, but a lot of things have been conserved," says Neveu, pointing out several frescoes of saints along the walls. "We needed depth in a building, and this gives us that. The walls inspire us, and the fact that it has some history makes the students treat the place with more respect."

Dominique Drolet wants to use that history to breathe new life into St-Jean-Baptiste Church. The vast grey stone church at the center of the Faubourg-St-Jean-Baptiste neighborhood, to which it gave its name, closed in 2015. Drolet and her neighbors are working on plans to transform the church into a genealogy center.

"Traditionally, the church was the keeper of the archives," she says. "We won't have the paper archives here, but we will have the virtual archives. There will be permanent exhibitions and school trips, and a training center for traditional arts as well."

"The city financed a feasibility study and told us it would be very positive for tourists, not to mention locals," says Drolet, who gave tours of the church when it was open. "Families from around Quebec and the United States would come here year after year to see the church where their great-grandparents were baptized. They were very disappointed to see it closed."

Profitability is a major challenge for all of these ventures, especially considering their vast, aging buildings. At its closure, St-Jean-Baptiste was expected to need over $10 million in repairs.

"The church is in good shape now, but we can't expect it to remain that way for 15 years," says Drolet. She and her fellow volunteers are raising money through a crowdfunding program and a partnership with a local brewery, which gives the project a percentage of sales.

"Whether you're a believer or not, the church is still a meeting place," Drolet says. "It's the heart of the neighborhood, and we're going to give it back that role."

Header image of Église St-Esprit, which now is home to the Quebec School of Circus Arts, by Ruby Irene Pratka/Shareable