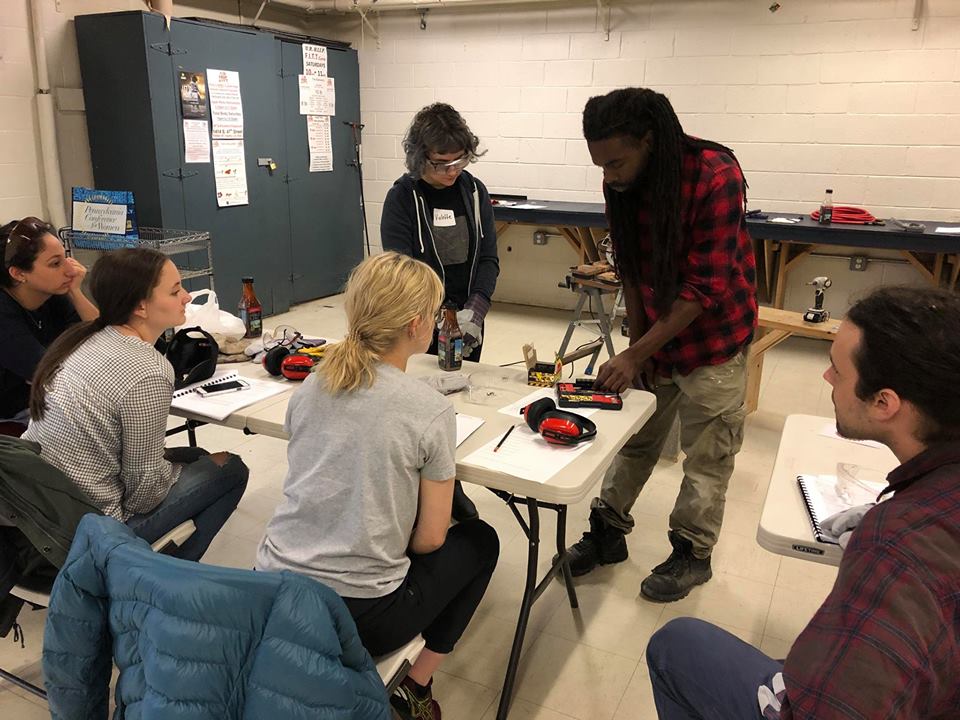 Cement mixers, grout saws, and air compressors aren’t typical staples in older urban homes. But with more than half of Philadelphia houses estimated to be more than 60 years old, these homes are often in need of both major and minor repairs.

The West Philly Tool Library was founded in 2007 to help make home repairs and maintenance more accessible and affordable for local residents. The library offers more than 4,000 tools to its more than 2,600 members, who pay for membership on a sliding scale. Community members are offered both tools and knowledge to perform tasks like needed repairs, furniture building, landscaping, and more.

What sparked the idea for West Philly Tool Library?

The Tool Library started as a volunteer project in 2007, headed up by Michael Froehlich, who had experienced the usefulness of tool libraries while he was living in California. He and his partner already owned a three-story Victorian in West Philadelphia, and when they returned to Philly, he wanted to make a tool library a reality here.

West Philly has so many beautiful old homes but taking care of them requires a lot of money and a lot of tools and skills. The idea was that if we could help people with the tool part — and someday the skills — people would be better able to maintain their homes, while participating in a sharing economy.

Most of us in the city also don’t have garages, so outside of the high expense of owning tools, city folks don’t have anywhere to safely store them, especially things like 60-foot ladders. The tool library stores the community’s tools and keeps them in working order. All a member has to do is check out the tools they need.

It’s been more than a decade since the library opened. How has it evolved?

Originally, the Tool Library was in a very small storefront in Southwest Philly. Because it was entirely volunteer run, it was only open on Saturdays. As membership grew, we were able to find another landlord who believed in the mission and gave us reduced rent at our current and slightly larger location. The increasing membership money allowed us to hire two part-time tool librarians, and now we are able to be open five days a week, which really increases how much and how well our members can use the library.

After we became an official nonprofit and had paid staff, we partnered with Urban Affairs Coalition as an umbrella organization to handle things like payroll and taxes.

We also now offer classes because we want to help people gain confidence in basic home repair and tool skills — carpentry, electric work, plumbing, and power tool use, so they can work on their own home projects. We offer these classes at a very low rate — $10 for members, as a way of meeting our mission.

What are the most popular tools?

Our most popular tools are the most basic power tools like drills. But saws are very popular, as they are large and expensive to own, but necessary for most home projects. Our very tall ladders are also popular, as they are hard to store. In the spring, we lend out a lot of shovels, wheelbarrows, mowers, and weed whackers as people start their yard and landscaping work. People also often come in for very specific detail tools that they just may need to use once or twice for a very particular job. For instance, someone came in this week for a pick ax, sledge hammer, and some hammer drills because he’s installing a sump pump in his basement.

Our membership is really diverse, from folks just out of college to older people in their 70s making home repairs. We’re racially diverse and economically diverse, much like West Philly itself. That said, we have a lot of members that live in other parts of the city. Our members are recent homeowners, retirees, small contractors, and renters who are looking to make small repairs or aesthetic changes in their current apartments. One thing all of our folks have in common is a desire to learn how to take care of their homes themselves, and a pride in being able to do things themselves. Our membership fee is sliding scale to make sure that we can serve everyone in the community.

How well-attended are your classes?

Have other places come to you for advice on how to start a tool library?

Paige Wolf is an author, publicist, and advocate dedicated to creating meaningful progressive change locally and globally. Paige is the author of Spit That Out! The Overly

Paige Wolf is an author, publicist, and advocate dedicated to creating meaningful progressive change locally and globally. Paige is the author of Spit That Out! The Overly Informed Parent's Guide to Raising Healthy Kids in the Age of Environmental Guilt and the owner of Paige Wolf Media and Public Relations, a B Corporation certified eco-friendly PR firm focused on sustainable clientele. She lives in Philadelphia with her husband, two children, and American Hairless Terrier. Visit www.spitthatoutthebook.com for her blog on making green living practical, manageable, and affordable.