Logic Shrink: A Game to Bring Logic Back into Political Rhetoric - Shareable
Skip to content 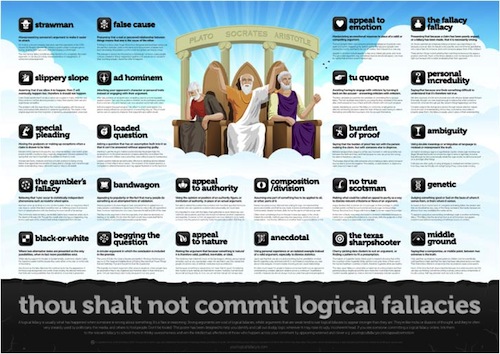 Heated political rhetoric is everywhere. It sets us apart from one another and erodes what’s left of civil discourse. It grinds the worthy concept of “logic” into dust. Not any more. Not when we fight back with an open source game I’m calling Logic Shrink.

I’m not selling a thing. You don’t need an app, a console, even a board. It’s entirely your game. Play a solitary version. Play it during a get-together with your extended family. Play it with kids, especially teens. Bring it to the classroom, community center, or secret Super PAC meeting. It will entertain.

Afterwards, when the lively score-keeping has ended there will be something new in the room. It may be unfamiliar at first. It’s a state of being that requires no name calling, no slippery slope. It’s logical thinking.

Now just envision the game being played over and over, spreading this thing called logic across all so-called divisions. Even if every snarky pundit huffed off the airwaves the game wouldn’t have to end. We’d just spread nice thick layers of logic in plenty of other places, including our own discussions.

How To Play Logic Shrink

The general idea is to watch or listen to two sides of an issue as presented by pundits, politicians, or other talking heads. Using a guide to logical fallacies, players call out any errors they perceive. The first person to call out a fallacy that at least a third of other players agree is correctly identified, gains points. Players who correctly estimate in advance how many fallacies will be committed by each side gain points too.

1. Logical Fallacies Reference. First, print out or otherwise make available a list of logical fallacies. I recommend the graphic made freely available by Jesse, Andy, and Som at YourLogicalFallacyIs.com, viewable or printable in a number of sizes. For a more detailed list try here The players won’t be immediately familiar with all of these fallacies nor the names they’re commonly called. Shorten the list to the most common fallacies for new players or kids. Give a little time in advance of each game for players to go over the list. It seems school-ish now, but it won’t when players get into the power of identifying those fallacies.

I suggest making the start of the game an amusing overview of logical fallacies. Try giving an introduction to each as a stand-up comedy routine or asking each player to offer an example of a logical fallacy they’ve heard recently.

2. Point/counterpoint sources. The game's zest comes from how an issue is presented. Illogical speakers make it come alive. Your sources might be right (Glenn Beck, Rush Limbaugh, Fox & Friends) versus left (Rachel Maddow, Chris Matthews, The Daily Show). It might be a political debate. It may be two podcasters squaring off on an issue. It’s best if the sources are taped or otherwise turn-off-able, because you’ll be stopping them a few times. Start with no more than ten minutes of each. Maybe five. Less is better.

3. Scoring. This is your game so you can keep score any way you choose. In fact, it's a blast to play this game non-competitively. To do so, guess in advance how many logical fallacies you'll find together, then call them as you see them. Logic still wins.

Here's how we've been keeping score. At the game's start, each player guesses the number of fallacies they'll find in the different segments, putting those numbers at the top of the fallacy list. As the game proceeds, keep track of fallacies outed. The easiest way? Provide two different colored pencils to each player (helpful for designating which source committed which fallacy), then let players check off fallacies as they are identified. They must be the first to call out the fallacy aloud to earn points but still need to track the total. You can get more high tech if you’d like, there are all sorts of student response systems (SRS), audience response systems (ARS), and personal response systems (PRS) available for smart phones and tablets. Or hell, make a wall-sized board that lights up when players touch a remote. This game is ripe for geekifying.

4. Disputing scores. This is where it gets, shall we say, energized. Stick to the statements heard and the way those statements fit on the list of logical fallacies. No insertion of outside facts, tempting as this may be. The goal of the game is only to discover illogical rhetoric. Be the first to call out a logical fallacy, you get five points if at least a third of other players agree by a quick show of hands. Other players can dispute the exact fallacy you claim or that any fallacy exists. (The recording will need to be turned off or backed up a few times.) Everyone should add the agreed-upon fallacies out to their overall score sheet, seeing who gets closest to their pre-game estimates.

5. Winner. At the end, the closest overall estimator gets 25 points. Also add up scores earned during the game, with the first to call out each fallacy winning 5 points per. Grand total wins, although we all know, logic does.

In comments, tell us your favorite sources to use, your experience playing it, and how you make the preposterous and the spurious shrink by applying logic.