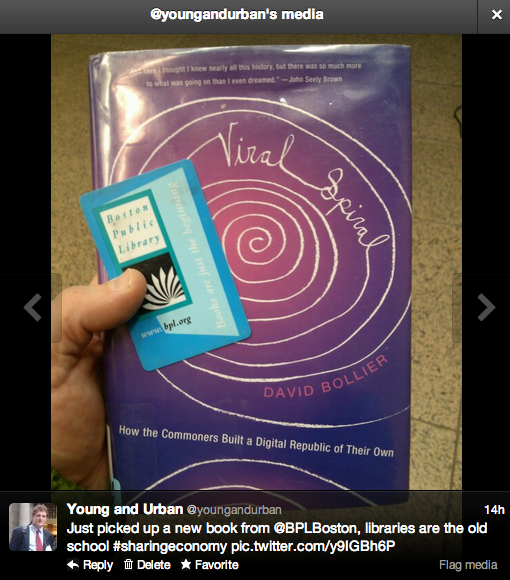 A Book Review of Viral Spiral by David Bollier

This book discusses the legal history of remix culture. It has been a hard fought battle for well over a decade. So if you’d like to learn more about the history of open source software and Creative Commons, then this book will be a great read.  Instead of going into too much detail about the history that this book discusses, I’ll briefly talk about the book and intersperse my top five favorite remixed YouTube videos.

Last week, I asked my Facebook friends to share their favorite remix YouTube videos. They responded with over 57 videos in only a few hours. Amazing.  It's important to remember that the Creative Commons and the open-sourced software movement really set the stage for sharing all sorts of things, even physical assets. So as someone who watches more YouTube videos than television, I am forever grateful that people can remix the art of others and share it with the world (my productivity on the other hand is not so grateful).

Prior to starting my year in the Sharing Economy, I made a list of books I wanted to read to educate myself as my lifestyle experiments progressed.  I take the train to work every day, so why not use my commute to read up on the subject?  I picked up Viral Spiral from the Boston Public Library because it was the oldest book that I could find that referenced the Sharing Economy (copyright 2007).  I thought that it would be good to learn about the events that led up to the explosion of the sharing movement as we know it.

Like all too many books,  I thought this one  would be filled with anecdotal and superficial pop-culture references that supported my preconceived notion of the Sharing Economy (peer-to-peer networks, Youtube, Wikipedia, etc).   However, the book was actually a fairly technical history of collaborative culture as it applies to copyrighting digital content.  This book can be technically dense at times, covering the pros and cons of various legal mechanisms for copywriting digital content.  I’m not a lawyer, a web developer, or a remix artist but I still found the book to give me a valuable perspective on the sharing of creative content.

In addition to spending several hours watching excellent remixed YouTube videos, I also I spent several hours talking with my computer science friends trying to understand LINUX, an open sourced operating system.  Despite my technical background and general affinity for spreadsheets, I know almost nothing about computers and how they work. I was surprised to find out that LINUX had over 100,000 contributing developers from around the world.  It is used by over a million people, both in corporate and in personal capacities.  Mind = blown.  How does that even work?!  I can’t even get the 5 people in my own office to agree on something let alone work together remotely.  Then try to add five zeros to that number and hope for the best?  Forget about it.  I’m sure I won’t ever fully understand LINUX, but I appreciate what they’ve been able to accomplish.  If you’re not familiar with this open-sourced operating system, just scan through the Wikipedia article on LINUX to get the gist.

Most of the book focused on the founding of Creative Commons. Creative Commons is a non-profit organization that has worked for more than a decade to develop special licenses that allow people to remix and share each other’s creative works without becoming a criminal. If you’ve ever downloaded remixed music, movies, photos, or books from the Internet, then there is a good chance that you have unknowingly benefited from  these licenses.

REMIX VIDEO #3 – All the way from the Ukraine, get ready for ACDC’s Highway to Hell, the Folk Version (thanks Matt) 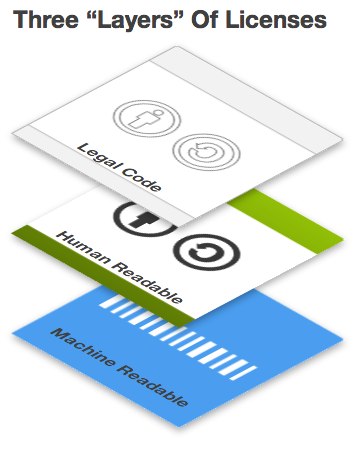 Prior to these licenses, the law considered you a pirate if you engaged in remix culture.  Each bit and byte of remixed information that you consumed on the Internet simply added to your criminal record.  Having copyrights with seemingly endless timelines (some more than 80 years, woof) just didn’t make sense for artistic culture.  So the founders of Creative Commons, including Larry Lessig, spent years trying to free creativity from the absurdity of the current copyright laws.

REMIX VIDEO #4 – From a deep, dark corner of the Internet I bring you “Over the Rainbow” via the Cat Organ (Thanks Vinny)

The major result of the Creative Commons was a set of licenses that artists can use to protect their content and yet make it available for sharing.  Here is a list of those licenses and if you’re interested then you can read more about them on CreativeCommons.org

Should You Read This Book or Just Spend Six Minutes Watching TEDTalks?

If you’re into open-source software and copyright law, then Viral Spiral is an absolute goldmine.  It contains history that everyone interested in digital culture should know by heart.  If you’re like me, and you’re fairly computer literate but don’t know much about web development, then this book will teach you a lot about the history of the digital age that you live and work in.

However, if you refer to YouTube as “The YouTube” or you don’t know how to download music from the Internet, then this book probably isn’t for you.  Try something like What’s Mine is Yours: The Rise of Collaborative Consumption instead.  I’m thankful for the smart, brave people who dedicated their careers to remix culture, but this particular book isn’t for everyone.  You’re better of cruising YouTube and enjoying the fruits of their labor.

So, if you don’t have the time to read this book as I imagine many of you don’t, I’d I recommend checking out this TEDTalks video by Larry Lessig and start the video at minute 12:00.  Lastly, the biggest takeaway I had from this book was that it’s important to be thankful to the people who came before you and struggled to provide you with the freedoms you enjoy today. Even if those freedoms happen to involve Cat Videos and Ukranian Folk-Rock Fusion.