How to Throw a Holiday Gift Swap - Shareable
Skip to content 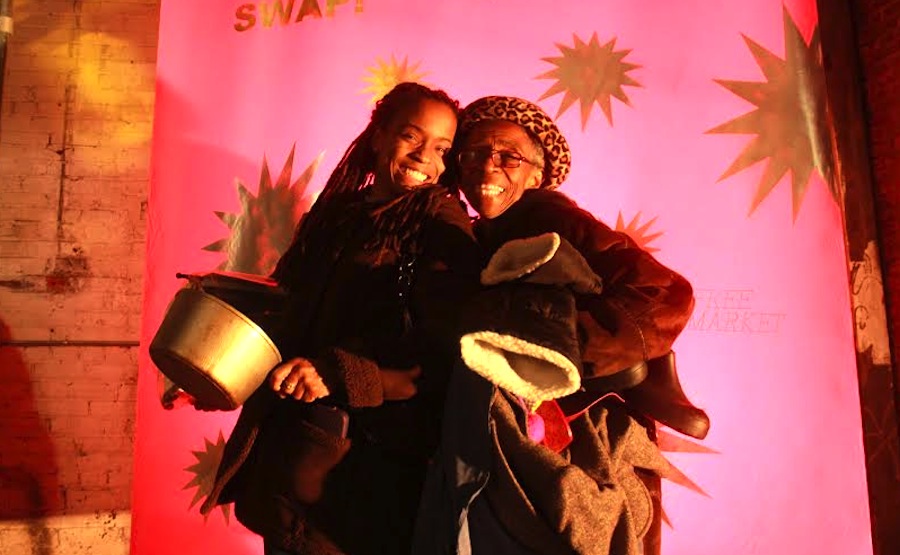 The holidays are imbued with the spirit of giving, and that doesn’t have to mean buying. Gift swaps, which can be held at any time, are particularly fun and valuable around the holidays. We can avoid contributing to the consumerist madness, bring friends together, and give new life to things that have been collecting dust.

Shareable asked Detroit’s Sharing Cities Network coordinator Halima Cassells, who describes herself as an artist, mom, gardener, independent media maker, and lover of all things turquoise, for tips on throwing a great holiday swap. An experienced swap organizer who recently hosted the 300-plus person Free Market Holiday Swap, Cassells urges people to embrace abundance, challenge hyper-consumerist conditioning, and get into the swapping spirit.

Shareable: What’s the idea behind a gift swap? What makes them cool?

Halima Cassells: The idea with holiday swapping is to re-imagine our wealth and the power of giving. Basically, we all have a lot of stuff! Whenever someone thinks that something is “taking up space,” “collecting dust,” or “adding to the clutter,” we are not uplifting our wealth—we have so much that we even have things that are no longer useful to us.

When someone picks up something that we’ve deemed a slight nuisance and holds it so gratefully, looking at it as a blessing, we can see that our stuff is given new life. Most people are excited to tell stories about their stuff that someone else is walking home with and the story adds another layer of depth to the process. We have exchanged a piece of our life’s experience, ingested some part of their point of view, created a connection that someone will remember every time they wear or use their object. This is a baseline for community building.

On another level, holiday swapping is awesome because we are circumventing the hyper-consumerist conditioning and combating the notion that you have to spend a lot of money and support multi-national corporations to express appreciation and gratitude for our loved ones.

Yet another level is that we are interrupting the waste stream. The typical American consumption pattern inputs natural resources and exploited labor into items—99 percent of which end up in a landfill in less than six months. The more we swap and extend the life of useful objects, the less we, as a whole, consume.

Our holiday swaps include a gift wrapping station for the purpose of promoting giving swapped items in style. For gift wrapping, the boxes, bags, wrapping and ribbon are collected from a local recycling center, Arts and Scraps, and brought to the swap by attendees. 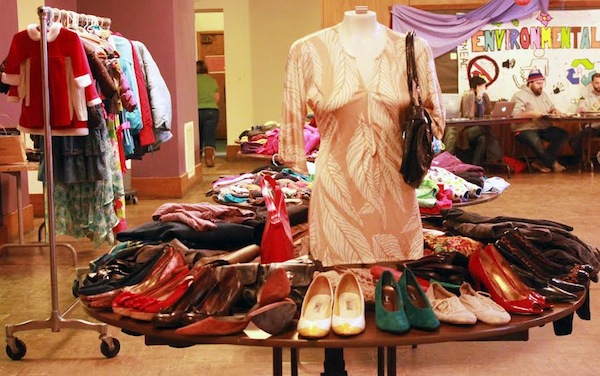 Arranging the swap items helps them look their best

Where’s the best place to hold a swap? What kind of setup do you need?

You can host one wherever you are comfortable. In your home with family and friends, at your school, church, club, rec. center, park, yoga studio, front porch, back yard or stoop—practically anyplace works. All you need is a designated area for swapping, such as a table with a sign.

What kind of gifts do you suggest people bring? Any items that work particularly well or tend to be really popular?

At our swaps we leave it open for people to bring what they want—we just ask that folks bring one useable or wearable item as the cost of admission. We let them know they can shop for free and take as many things as they desire. Why take this approach? Because nobody brings just one thing—everyone comes with a bag.

We now encourage items for men because we noticed that there would be several tables with womens clothes and accessories and shoes, and maybe half a table of mens items. To date, the most popular items that are taken first are living plants. Lots of jewelry, books, and kid stuff is also swapped. 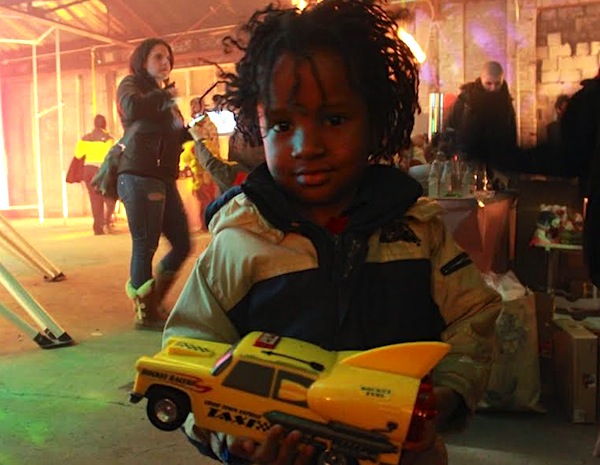 Anything you see too much of?

Categorically, I would say the sheer amount of womens clothing sometimes is overwhelming and a lot gets donated afterwards.

Are things just laid out on tables so everyone can see the offerings? Do people put their gift on the table or does someone lay everything out?

For the smaller swaps I put a few things on one table five minutes before people arrive and just make a sign saying something like “Swap Zone.”

For this year’s Holiday Swap, we’re hoping to have 300-plus people participate, so we will spend about 10 hours setting up the space, laying items out, decorating, making signage, dressing mannequins, setting up the sound system etc., prior to people arriving.

I’ve asked people beforehand if they want me to pick up items from their house, so I have a large amount of stuff to begin with. When folks come in they are greeted, asked if they’d like to be on the swap mailing list, and directed to place their items with like items.

Usually the tables are divided into four categories: women, men, children, housewares, but that all depends on what you get. People are pointed to the dance floor and the gift wrap station and reminded to please take whatever they like. 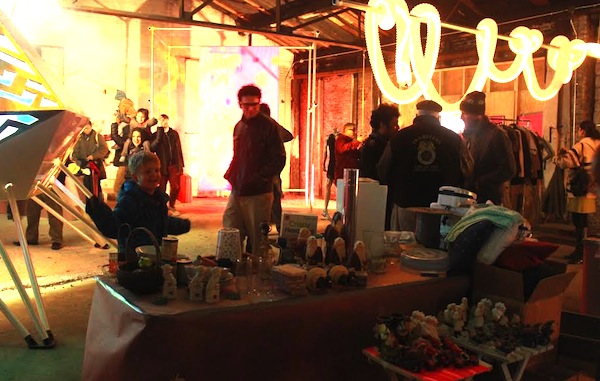 Set a welcoming tone and encourage people to have fun

How do you get the word out about the event? How do you share information about how the swap works?

We use word-of-mouth, phone calls, printed flyers, Facebook, and emails. Once someone has a great experience they are asking about and waiting on the next one. However, we always encourage folks to do their own.

The Holiday Swap in Detroit was a big event, with a DJ, dancing, and a photo booth. How did this idea come about? What kind of resources are needed to pull it all together?

The Free Market Holiday Swap started last year as the first large-scale swap I had ever done, thanks to partnering with my friend Vanessa. And this year’s is even bigger! But it all started a few years ago when I had my second child and noticed that I hadn’t stashed a lot of clothes from my eldest. I started to think about who else had babies in my circle, and who had slightly older children who may want to unload some clothes.

I typically like to cook out in the summertime, so at this particular barbeque I asked everyone to bring some kids stuff they wanted to get rid of. That was the first swap, humbly held on my dining room table in the North End of Detroit. It was so much fun, and awesomely abundant, we decided to keep it going and the swaps kept growing.

For the larger swaps we started soliciting sponsorships and donations from local businesses and got a Shareable seed grant to pay for a larger space, the DJ, and a photographer. 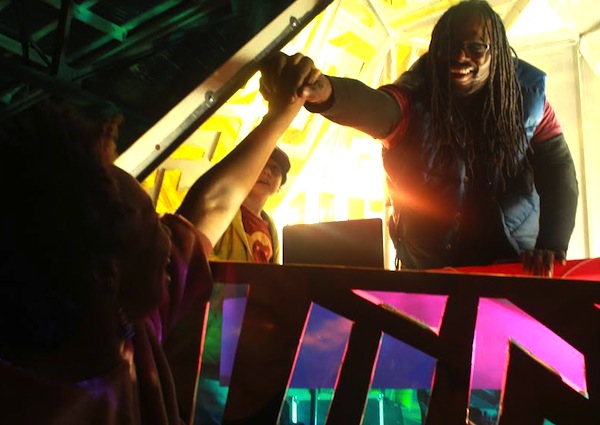 Adding music to the mix is always a good idea. Here, DJ Mike Clark gets some appreciation from a swapper.

On the day of the swap, how do you set the tone for the event? How much managing of it do you need to do?

I hug people as they enter and invite them to place their items, grab a shopping bag, and enjoy. Not that much management is needed except for some contitual tidying up so the tables look inviting. 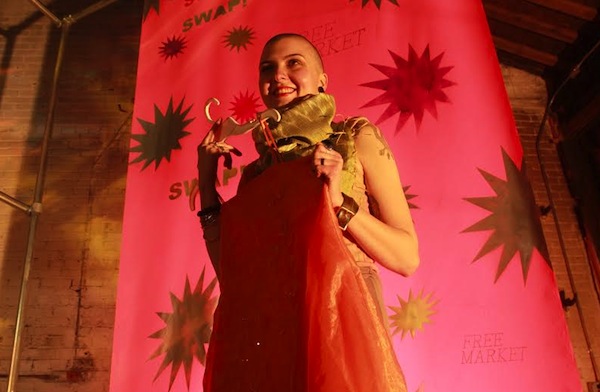 Is it a one-for-one swap, where people show up with an item and take an item?

It’s a one-to-all situation. You can structure yours however you want based on the items you get. However, the overwhelming trend is that folks want to clear out space, so when asked to bring one thing, they bring one or two or three bags of things. The practice of asking for one thing and being allowed to take more than what you were asked allows for each person to uplift that we live in abundance.

At the end of the night I would prefer everything be taken. Whatever is left I deliver to local charities that will use the stuff, particularly small churches with specific ministries, or COTS, a shelter that helps families get back on their feet.

In the event that people show up without a designated item, we still would like them to participate. Perhaps they can share a poem or a song, or they can share their time by helping to do something in the space, like take photos, or help gift wrap, or bag whatever’s left. Perhaps they actually do have something in their car that they just remembered that they want to give. Keeping it open and inviting all types of sharing wins.

What else should people know? What advice can you offer those who want to have a gift swap, either small or large?

Just do it! If you have a family gathering planned over the holidays, suggest that everyone bring one thing to share and see what happens.