How to Start a Crop Mob - Shareable
Skip to content 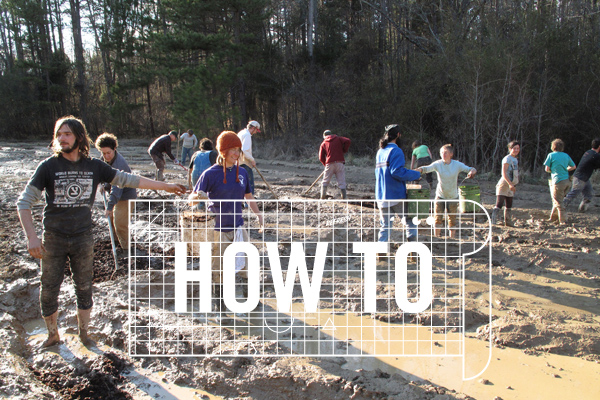 There’s a lot up for debate in the realm of agriculture these days, but there’s one thing no one can dispute: farming is hard, often lonely work. But something happened one fall night that is helping to make it just a little bit easier — and certainly less solitary…

In the fall of 2008 a group of 11 young farmers living and working in North Carolina’s Triangle Region got together to talk about issues facing young farmers –things like healthcare, wages, access to land. As they talked, one young farmer, Adah Frase, squirmed in her seat before deciding to speak up. “I’m tired of sitting in meetings just talking about things. It feels like a waste of my time. Why can’t we go out and work while we meet rather than just sitting around a table?”

Frase believed you could build stronger relationships with people by working side by side rather than just sitting around a table talking. Her fellow farmers agreed. “The idea emerged that we’d come together to build community, help each other out, and share a meal,” explains Rob Jones, one of the farmers in attendance that October night. “We decided we’d call it the Crop Mob.”

That month, the farmers had organized their first mob with 19 people digging, sorting and boxing 1,600 pounds of sweet potatoes in less than three hours, an effort so successful that it became a monthly event. “There has always been a spirit of cooperation in agriculture because it is a lot of work,” says Jones. “We’ve just found a slightly different way to manifest it. It is a part of making sustainable agriculture personally sustainable for the farmers. Certainly, we are seeing a lot of young people that aren’t interested in being 'the farmer' on a farm. They want to work cooperatively and collectively with others as part of a community.”

As word began to spread of Crop Mob’s efforts — and the New York Times’ Sunday Magazine sung its praises- other farmers have started their own regional versions of Crop Mob — as have aspiring farmers and what New York City’s Crop Mob refers to as the “ag-curious.” Volunteers might build a fence, clear a field, or harvest a crop, all based of course, on the needs of the farm being “mobbed” that month.

Interested in getting your hands dirty? Crop Mob suggests a few basic principles:

1) Keep that wallet holstered. No money is exchanged.

2) Scale it down. Work on small-scale, sustainable farms and gardens.

3) Break some bread. A meal is shared, often provided by the host.

4) Reciprocity. This is not a charity. We crop mob for crop mobbers.

Crob Mobs are popping up all over the United States. Crop Mob’s website has an interactive Google map so you can find a nearby mob (you can also search for groups on Facebook). Or go here to start your own.

This piece originally appeared on the Pepsi Refresh Project website.