How to Negotiate a Community Benefits Agreement - Shareable
Skip to content 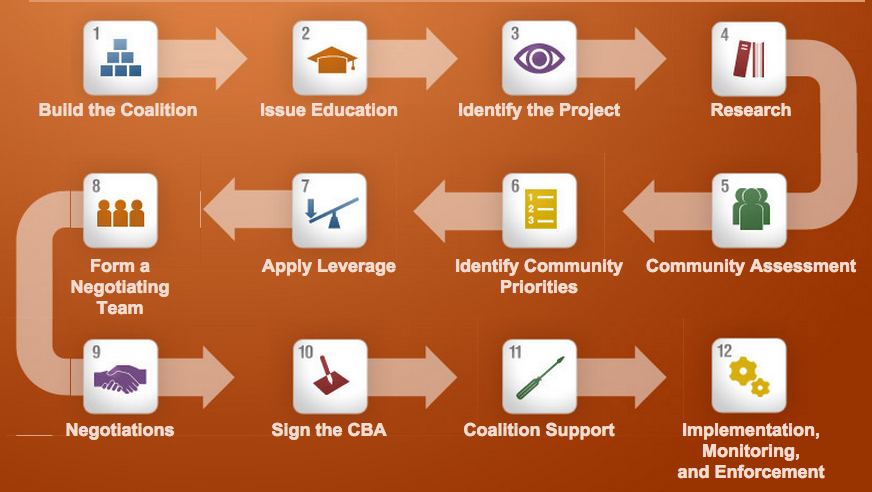 Image Credit: Community Benefits Agreements: A Framework for Success by the Partnership for Working Families

Community Benefits Agreements (CBAs) are private legal contracts between developers and community coalitions seeking to facilitate public investment in development. Through these contracts, developers agree to certain standards outlined by a community, which usually involve housing, jobs, and environmental considerations. In exchange, the community coalition agrees to publicly support a project and use its influence to support the development in regulatory review and public subsidies.

You can use the following steps from Community Benefits Agreements: A Framework for Success, an interactive online tool published by the Partnership for Working Families, to negotiate a CBA.

Under ideal circumstances, a coalition will be proactively formed before a developer proposes a project, but sometimes coalitions spring up reactively in response to development. In either case, community coalitions must represent every stakeholder within a community. It is also important for coalitions to have their own legal representation.

Coalitions must spend time understanding both the issues raised by development and the needs of the community. An effort must also be made to ensure that all coalition members have a voice and that the opposition is not ignored.

Community coalitions may monitor city development and campaign for a CBA with key projects based on a variety of factors that determine the likelihood of success. Criteria might include making sure that the coalition has some leverage (generally through a public subsidy or other public approval), that the project is “mixed use” (which will help bring multiple stakeholders to the table), and that the project involves several issues from the environment to jobs.

It’s crucial to understand the development process, the history of the area where the project is located, and the major players in order to identify where leverage points might exist. Additional key research items include existing and alternative regulations, legal considerations, and best practices for economic development practices—especially those that do not impact developer profits.

A thorough community assessment is required for verifying that the coalition is a true representative of the community. The assessment involves meeting with community members—both in small groups and in large forums—to nail down community priorities and ensure that all voices are heard. These conversations will likely result in a long list of community needs and wants.

In this step, the coalition narrows down the long list of needs and wants identified in the community assessment so it can begin to develop a platform and campaign for negotiating with developers. This step includes more meetings to identify bottom lines without which a CBA would not be possible, to coalesce diverse needs, and to simplify and improve coherency.

Negotiations should not begin until the coalition has achieved significant visibility and power, at which point it can begin to “flex its muscle.” To determine leverage, construct a “power analysis” to assess the coalition’s ability to influence decision-making. Some coalitions will look to lawyers to help build leverage, but legal leverage has not been the primary factor in getting developers to the table in the past; community pressure and organization is often more effective.

A negotiating team should include legal council and experienced negotiators. It must also be reflective and representative of the community. A negotiating process and procedure outlining who will be spokesperson, the protocol for communication, and how questions will be asked should be provided to the developer.

Coalitions must enter negotiations with a clear idea of essential and core commitments, an understanding of where concessions can be made, and openness to creative solutions. Appealing solely to social justice merits is unlikely to be successful. The coalition must also convince the developer that the community’s demands will not have a negative impact on the project.

Signatures can include members of the coalition and coalition organizations, the developer, and possibly the municipality. Legal counsel is essential at this step to ensure the legality and enforceability of the agreement.

Once a CBA has been agreed to, the coalition must hold up its end of the deal to support the project. This may involve things like agreeing not to oppose the project, attending public meetings, speaking with the press, and testifying before public officials.

Implementation includes monitoring and enforcement of the CBA. The agreement should include some mechanism for such monitoring. This may include revising implementation processes that aren’t working.

A full list of Community Benefits Agreements that are in effect can be accessed here on Partnership for Working Families website.