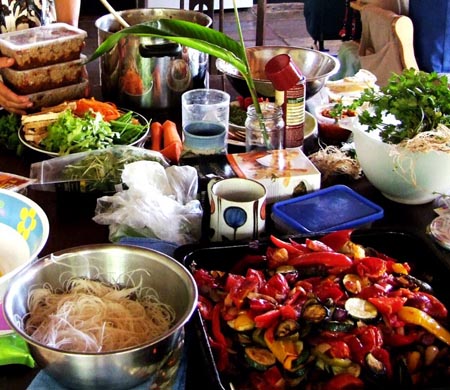 As a mother in the Western world, we are often far from extended family and support networks who know how to pitch in when we are raising children. The nuclear family set-up seems to cover everyone in the family apart from the mother who tends to carry the lion's share of the domestic load, whether she be in paid work or not. With this kind of family structure, when the one person carrying everyone and everything goes down, the family goes down, too. The time is ripe for real change in the journey of the mother.

This is where MamaBake fits in. MamaBake takes one chore that mamas spend a lot of time thinking about and doing, and shares it out with other like-minded mums. As well as being very real in how helpful this is, it is also breathes new life into the old school idea of an 'on your doorstep' support network. Once you're part of a MamaBake group, you are very much on somebody else's radar when you need back up. We've had mums get help from other mums with moving house, cleaning bees, cooking and cleaning after a spell in the hospital, and meal care packages when a mama is sick or has recently birthed. The positive spin-offs from this simple and common sense idea are too many to mention.

That's all well and good on paper, but how do you get started? 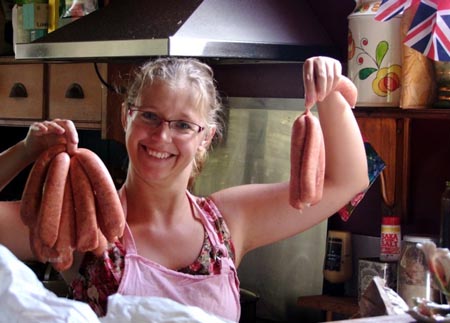 Talk to your friends — other mamas at the school gates, etc. — about the MamaBake idea. Find out if it appeals to them. If it does, take the initiative to organize a small MamaBake at your house. It may take the form of a cup of tea and cake in the first instance to get to know one another; but if you're already friends, then just take the leap!

Don't worry too much about who has how many number of children and ingredients etc. We have had a year's worth of MamaBake sessions every week and we've come across every possible scenario. Trust me, when you just do it, it all works out in the end.

MamaBake is about blowing away the nonsensical and destructive competitive climate that exists in the mothering community. So, in terms of what to make for a MamaBake, make what you know and what's easy for you. This is about lightening your load, so make sure that's what you're doing. You'd be surprised how much you can learn when you're working shoulder-to-shoulder regularly with other women.

The Basic MamaBake Formula:
1. Mamas gather for approximately three hours per week to cook up a big-batch meal.
2. At the end of the session, each big-batch meal gets divided up amongst the mamas so that each woman goes home with a variety of homecooked meals for a few nights.

We have found that our sweet number is about six mamas. Any more than that can get very chaotic and push the comfort zone boundaries in your own home. Having said that, we have had several MamaBake sessions at a local village hall with 15-plus Mamas and their children and it was fantastic, AND we are using a much under-utilized community facility. 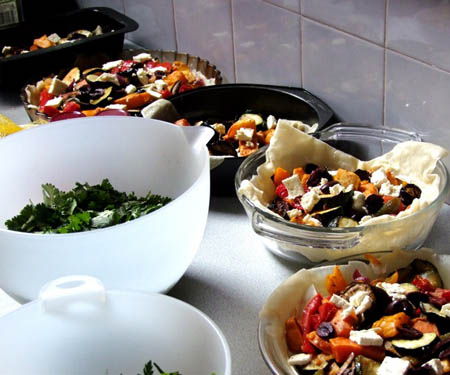 The Role of the Hostess
Much like anything you might have at your house, the hostess takes care of her guests. Generally, she would pop on a big pot of tea/chai and the mamas would bring nibbles if they have time and are able. The hostess also shows the mamas around the kitchen. Here at MamaBake HQ, we have a rule of "Don't tidy your house especially for a MamaBake session." For us, it's a small 'stick-it-up-yours' gesture against the perpetuation of the SuperMother myth.

The Session
From here on in, the session generally takes care of itself. It will be delicious chaos, but it is delicious.

Some Variations on the Basic Theme
Whilst it is usual that the time is set aside to cook at the MamaBake venue, it's not always possible nor is it always the easiest option. In this case, we have sussed out some other tried-and-tested ideas.

1. Some mothers may bring a pre-prepared meal so they are able to head straight for the cake and tea and relax.
2. Another option is that you cook up something at home (maybe you have sick kids) and another mama picks it up and brings you back your share of the divvy up.
3. Some mums, if they're really pushed for time, might even just show up for the last half an hour for the divvy up.

Either way, the outcome is the same: It all works. 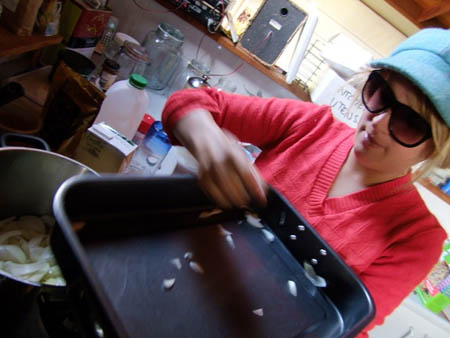 And, yes, while MamaBake is really helping us mamas out and giving us what we need to be better mothers/women, it's also demonstrating to our children the power of community — how it can work and how people working together create a greater good.

MamaBake is inclusive of all mamas and, to reflect this, membership to the movement is free. When you sign up, you will also be sent a free eKick-Off Guide to help you start up your own group. Each pack contains three big-batch recipes, a divvy-up matrix, and a poster that you can print out and pin up on your local community notice boards. The website and blog also have a number of recipes and forums.

The MamaBake concept was conceived of by Michelle Shearer, surfing Mama of two children and two parrots on the North Coast of NSW, Australia. The idea was inspired by her

The MamaBake concept was conceived of by Michelle Shearer, surfing Mama of two children and two parrots on the North Coast of NSW, Australia. The idea was inspired by her Grandmother (Nanna Bird) who told her how her mother used to swap bread for hotpots with other mothers in the street. The MamaBake concept made perfect sense to everyone: let's cook for each other and ALL enjoy some free time and support . From there the MamaBake concept has captured the imagination of Mamas across Australia and beyond.