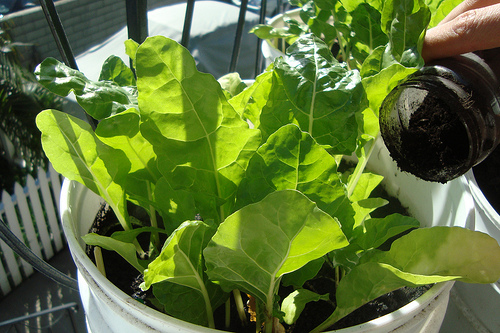 Environmental activism comes in many shapes and sizes. Some folks set up camp in trees; some film undercover videos; and still others grow their own food. The latter option is a quieter, simpler approach to the ecological crisis that faces us, but it might well be the most powerful.

Food, as it happens, ties into the environmental movement at multiple points – soil depletion, deforestation, methane and carbon emissions, water pollution, and so on. Taking even a baby step toward protecting those myriad commons equates with a huge leap into a shareable life. It shouts out that you care about the world around you, if even in a hushed voiced.

As if that weren't enough to lure you into the realm of homegrown eats, it's also a lot less dangerous than chaining yourself to a tree, sneaking around a CAFO, or passing the public option. In terms of cash and experience, it doesn't take much of those, either, as Mike Lieberman, known as CanarsieBK on the wide world of the web, proved when he started his first garden on a New York City fire escape in 2009.

At the time, he had little more going for him than passion. He was not an experienced gardener by any stretch of the imagination; he just knew that he wanted to grow as much of his own food as he could. Lieberman reckoned that even growing a smattering of herbs and a handful of vegetables would lighten his footprint in a tangible, quantifiable way by reducing the resources used to produce and transport those goods to his kitchen.

This simple act would also reconnect him with real, honest-to-goodness food. And so, after reading half of a book on gardening, he dove right in and has been sharing his experience with others ever since. 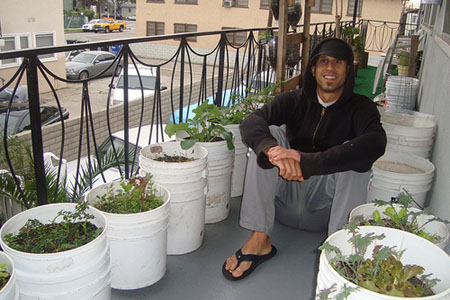 Now in Los Angeles, Lieberman has a full-fledged balcony on which to play. He documents his trials (and errors) on his Urban Organic Gardener blog and encourages others to enter the fray because he believes that we need “to re-establish our connection with food that we've lost over the past few years. We are humans. We grow food.”

To this end, Lieberman goads urban agriculture newbies into action, saying, “Don't worry about having the perfect place or the perfect time or the perfect whatever the excuse is. The only perfect thing is right now, so work with that and just do it. Another piece of advice that I'd give is to stick with it. You aren't going to be 100% successful. No one is. The most important thing is that you learn from your mistakes and continue to improve … and have fun.”

He continues, “I was determined to grow some of my own vegetables and so should you. I’m not saying to start a huge garden. I’m saying to grow one herb or veggie. It will make a difference for you and for the environment.”

Still, there are some practical considerations involved. The good news is that many urban agriculture pioneers – like Lieberman – have blazed a trail toward a wide horizon of success that includes all manner of trade secrets, such as hanging and vertical planters, self-watering containers, trellises, shipping pallets, wine bottles, cinder blocks, and even swimming pools. By planting even the suggested one herb or veggie, you, too, join the ranks of these urban gardeners, a community of food growers that shares a passion, wisdom, and understanding of food's place in the bigger scheme of things.

So, really, no excuses. 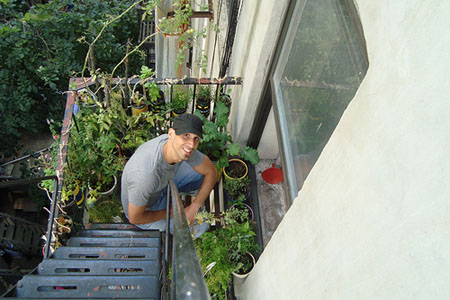 The first task at hand, then, is deciding what to plant. Based on his own success rate, Lieberman advises urban gardeners to plant things like “lettuces, greens, and some herbs, like mint. They are pretty difficult to kill and they will get used. Depending on the space and other circumstances that you are dealing with, I'd stay away from tomatoes and cucumbers. On my balcony garden in L.A., I get four to six hours of sunlight a day, which makes growing these crops near impossible.”

With the crop choices made, head to your local farmers' market or nursery to pick out some organic seeds and/or starts. Fern Richardson, over at Life on the Balcony, offers solid advice for seed-starting and encouragement for balcony gardeners to color outside the lines with things like peach trees: “I have had a peach tree growing in a pot for two and half years. It is one of my absolute favorite edible plants to grow, because the results are so juicy, and tasty! Peaches that are sold at supermarkets don’t even begin to compare to the taste of homegrown, tree-ripened fruit.”

If you're at all like Lieberman, the satisfaction of growing your own food in an urban environment will quickly be paced by your enthusiasm for conquering the inherent challenges: “After I started urban gardening and got comfortable with my fire escape garden, I started to see spaces differently. I started to look at everyday objects, trash, and the smallest of spaces and think to myself, 'What can I grow in that? What can I grow there?'”

In addition to their blogs, both Richardson and Lieberman also produce informative videos on specialized topics such as fertilizer and manure tea. As with most topics, YouTube provides a wealth of helpful instructional videos. The GardenGirlTV series covers a lot of different situations an urban gardener might face.

Another great resource, Instructables.com offers quite a few fantastic tutorials for seed starting, asphalt gardening, composting, and building small-space planters using things like shoe organizers and plastic soda bottles. In fact, Lieberman took inspiration from the latter and stepped it up a notch by substituting a shipping pallet for scrap wood.

The steps to creating a balcony garden are as simple or as elaborate as you want them to be. In a nutshell:

1. Plot out the space and select the “crops” you want to plant.
2. Gather your supplies – seeds, starts, containers, tools, soil, and fertilizer.
3. Plant!
4. Water on a regular basis paying attention to each plant's needs.
5. Harvest, eat, and share your bounty.

Through your trials and errors, you can help guide your friends and neighbors through their own growing pains. In addition to the various kudos you will win by growing some of your own food, you'll also recognize and enjoy a deeper satisfaction, one that connects you not only to the planet, but to your present and past community, as well.

As Lieberman likes to say, “The main reason that you should grow your own food is simple: It’s because we are humans. Growing food is what we do (and have done for thousands of years) and essential to our existence. As a society, we have completely lost our connection with our food. Civilizations were built upon being able to grow food and the community that went into it from planting, taking care of, to harvesting, preparing, and sharing it.”