How to Carpool with Strangers - Shareable
Skip to content 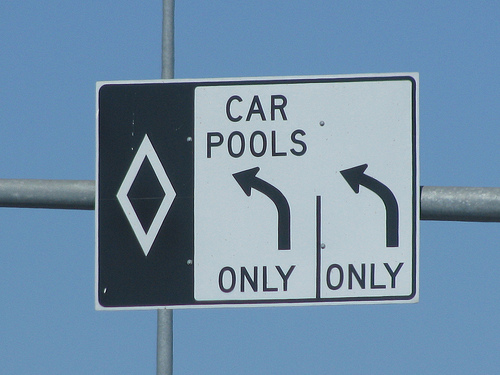 One needn’t look any further than the Gulf to see one major impact of our autocentric nation’s addiction to oil. One of the most blatant symptoms: all those two-ton cars in rush hour traffic carrying nothing but a driver.

There is, of course, usually an alternative. Since 1999, Steven Schoeffler has run the site eRideShare.com, which helps connect fellow commuters into car pools and rid the roads of single occupancy vehicles. Schoeffler gave us some tips on how to share a ride, from connecting with strangers to establishing proper ride-time etiquette.

Schoeffler sees the creation of a successful carpool as having two major elements: connecting with others to commute with and coordinating the daily routine.

You’ll need to find someone else to carpool. Here’s how:

In the office: It makes things awfully easy if you can find colleagues who live nearby, since you’re all sharing the same destination. Schoeffler suggests hanging some flyers in the office with your town or address, and your email or phone extension.

Online: The most obvious resource is Schoeffler’s own eRideshare.com, where there are more than 12,000 routes already listed around the country, quite possibly in your area. On the site you can create a profile, search for rides near you, or register your own commute to attract others into your car. Businesses, organizations, clubs, and event organizers can also create groups to lump passengers into fewer vehicles. If you strike out on eRideshare, Craigslist has a rideshare category that isn’t nearly as well organized, but might yield a connection if you’re lucky.

Due diligence: Fear and safety concerns keep plenty of people from seriously considering carpools. And while these concerns shouldn’t be dismissed, they also shouldn’t stand in the way of saving some gas, money, carbon emissions, and time (if a carpool means zipping through traffic in an express lane). Schoeffler recommends always meeting up with potential carpool partners right off the bat, before making any plans. “Meet in a public place for lunch,” he suggests, “and get to know them a little bit.” You can also check out Facebook or LinkedIn profiles, if they’re public, to get a sense of who you might be spending your rush hours with.

Go casual: In some cities, so-called “casual” carpools have developed. The most famous and longest-lasting has to be for East Bay commuters traveling into San Francisco. Though “casual,” a website (complete with Google map) has been launched to help folks connect. It’s more freewheeling, less secure, and certainly requires some guts, but plenty are doing it.

“It’s so important to establish upfront what the daily routine is going to be,” says Schoeffler, adding that “good ground rules are necessary.” Here are some points to come to agreement upon before the first ride.

Where will the pick-ups be? Sometimes the driver will pick up passengers right at their homes; but oftentimes commuters will meet up at a predetermined location, like a “Park and Ride” or another convenient parking lot.

How often? If this is not an every day carpool, make sure that’s clear upfront. If it’s not a Monday through Friday arrangement, consider sharing a calendar at the beginning of every month with the carpool days clearly marked.

What’s the “late” policy? Sometimes, somebody will be late. How long should the driver wait for them? Schoeffler suggests 5 minutes as a reasonable compromise, but any group can set their own terms. Passengers need to know and agree that if they’re not at the meeting point by the end of the grace period, they’re on their own.

What can you do in the car? Is it alright to drink coffee or stuff down a bagel? How about smoking? Some drivers can’t imagine a 45-minute commute with a cig; others can’t imagine being in a smoky car. Get this all sorted out beforehand.

Who controls the radio? It’s probably best to have a radio routine. Lots of carpool groups opt for public radio or other news stations, according to Schoeffler, because they can substitute for conversation (which not everyone is keen on having first thing in the morning) and also keep commuters in the loop with traffic and weather updates. Regardless, the driver should set the standard and make sure that all passengers are alright with the radio routine.

All of this may seem like common sense, but when asked why they don’t carpool, many solo commuters simply reply that they wouldn’t know how to. Finally, there’s another potential benefit that we haven’t mentioned yet. “A lot of people become really good friends with the carpool connections,” says Schoeffler. So sharing a ride to work doesn’t need to be an anonymous, formal transaction.

This post originally appeared on www.refresheverything.com, as part of Shareable’s content partnership with the Pepsi Refresh Project, a catalyst for world-changing ideas.

Ben Jervey is a Contributing Editor and Planet Ambassador to the Pepsi Refresh Project and author of The Big Green Apple: Your Guide to Eco-Friendly Living in New York

Ben Jervey is a Contributing Editor and Planet Ambassador to the Pepsi Refresh Project and author of The Big Green Apple: Your Guide to Eco-Friendly Living in New York City