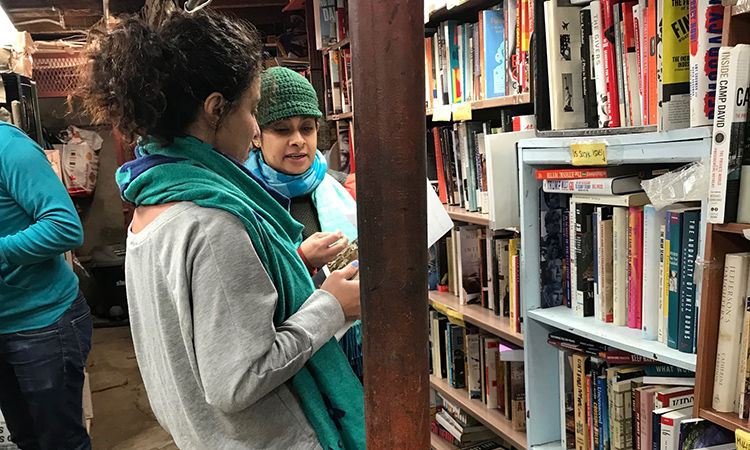 I recently slipped through a sidewalk cellar door to enter the basement of Freebird Books, a large space crammed with books organized into different sections, where I spent the evening reading letters from prison inmates and selecting and packaging books for them. At least twice a week, volunteers go through the 700-800 letters NYC Books Through Bars, a collective based in New York City, New York, receives from inmates every month and fulfill their requests.

It's a team effort. Founded 21 years ago, the group seeks to provide "humanitarian outreach to people who are incarcerated," says Daniel Schaffer, a coordinator at the organization. All books are donated, as are the brown bags used as packaging — the only expenses are postage and tape. The organization is always looking for volunteers. Freebird Books allows the group to use their basement for free. Bluestockings, a collectively-owned radical bookstore that's also based in New York City, serves as the group's official mailing address because many prisons mandate that books be sent directly from a bookstore or publisher. Another local bookstore, Greenlight Bookstore, maintains a wish list on their website of books requested by inmates.

"If people in prison could be armed with knowledge and have a sense of their own empowerment, that would allow them to better their situation," says Beena Ahmed, another coordinator at NYC Books Through Bars. Ever since Congress ended Pell Grant support for incarcerated students in 1994, and as correctional facilities in various states cut library funding, inmates' access to books has grown ever more limited. But education has proven to reduce recidivism rates by up to 40 percent, as reported by The Nation in 2015. For Ahmed, NYC Books Through Bars is a way of "helping someone get through the day," the importance of education cannot be overstated.

The collective's impact is far-reaching — volunteers send books to inmates in 40 states. Other regional programs serve the remaining states. I joined a small group of volunteers as we pored through letters from Texas, which make up roughly half of those received. In the chilly basement, surrounded by the sounds of shuffling books and the unrolling of unwieldy packing tape, we fulfilled inmates' requests — books on urban fiction, American Sign Language, vegetarian cuisine, and the stock market. 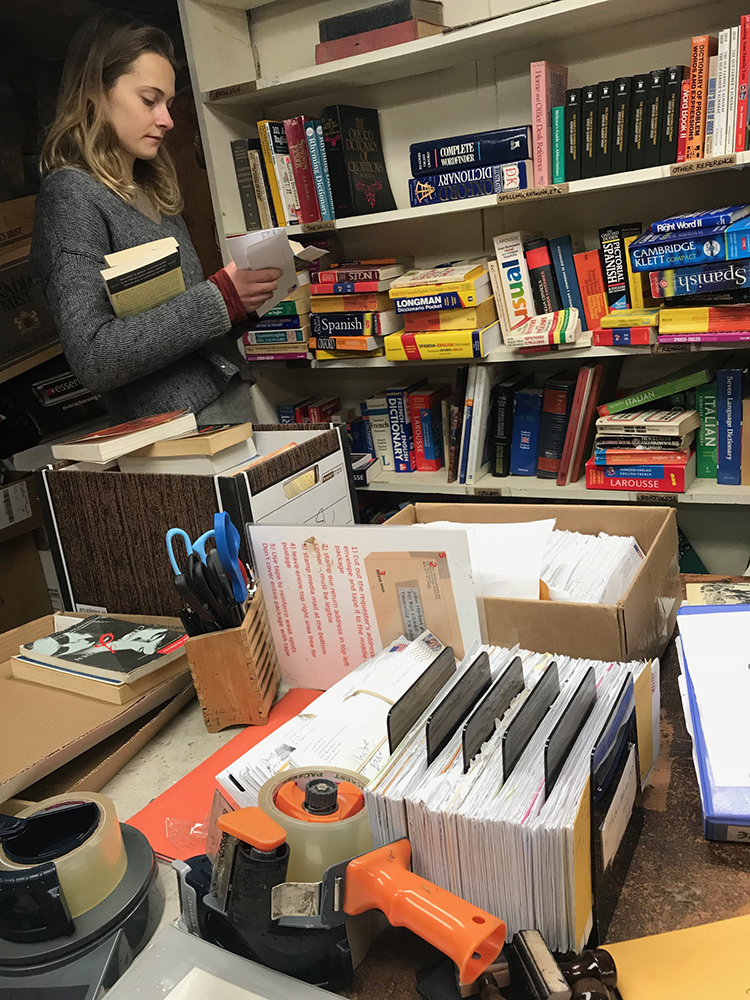 Fulfilling requests often felt like a curatorial act — one that came up against many limitations. It was impossible to ignore the binders — two massive volumes containing a list of all of the books banned within the Texas Department of Criminal Justice. Looking through the limited selection of urban fiction, would a book set at a chop shop be accepted? We couldn't fulfill every request exactly. Inmates requesting a dictionary must be placed on a waiting list for this coveted item. Sending a book on tai chi was out of the question because the department bans books on martial arts. Texas isn't alone in implementing restrictions. In early 2018, NYC Books Through Bars successfully helped repeal New York's Directive 911A, which only allowed prisoners to receive packages from six approved vendors, who were offering only 77 books total.

Books help alleviate isolation and empower inmates for re-entry. NYC Books Through Bars sends books directly to prisoners because it doesn't want to supplant the library services that prisons should provide. Still, inmates often share the books with others on the inside. Inmates reach through the distance by sharing their thoughts in the letters they've sent to the group:

"I appreciate your kindness and assistance in providing me books about dogs. I'm doing a self-study in reading everything I can about dogs, their health care, training, veterinary medicine, and laws that protect them from abuse and cruelty. After my release from prison, I plan on dedicating the remainder of my life to the lives and safety of dogs," wrote one inmate.

Another expressed his gratitude by donating what little he could: "Thank you for the knowledge you sent me and I will make sure I put these books to use. Enclosed is three stamps the organization can use for future mail delivery."

"Not everyone is able to be the lawyer who frees someone who's innocent," says Schaffer. "While this is a very small thing, if I [pack], 25 or 30 packages, I know that while I'm not doing a radical act, in some way I'm reaching out to someone."