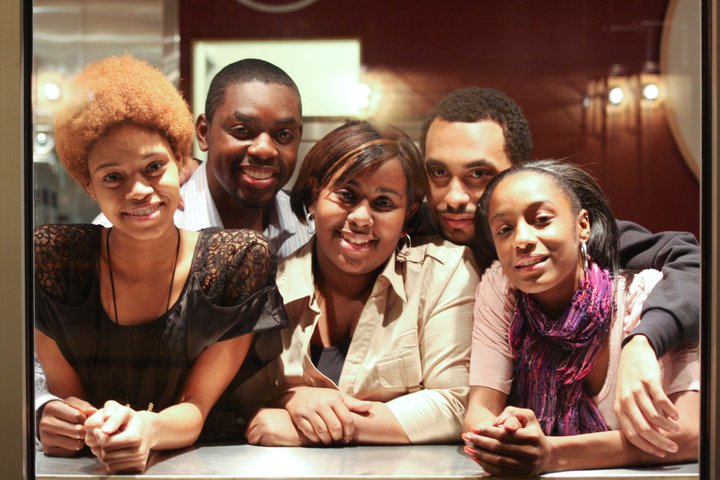 The world is experiencing significant economic struggles. With the United Nations projecting a 30 percent increase in global food prices by the end of 2011, Europe hitting an all-time record high of $8.63 a gallon of gasoline, and America’s youth unemployment rate reaching nearly 52.2 percent, there’s a high probability that you’re feeling the stress.

Yet even in the toughest of times, social networking continues to grow. With Generation Y at the forefront, our lives are increasingly moving online. Reports currently state that “90% of Gen Yers over the age of 18 use the Internet. 75% use social networking–Facebook, LinkedIn, etc. 60% of them access the Web wirelessly while on the go. 83% keep their cell phones nearby, day and night, awake or sleeping. Two-fifths don't even have a land line." Meanwhile, we’re experiencing a decentralization that will change the way goods and services are exchanged forever.

Einstein said you can not solve a problem with the same kind of thinking that created it. It is time for us to play a new economic game. A game that is based on abundance instead of scarcity. A game where everyone has value. A game where people are passionately productive. And most importantly, a game where the creation of money is in the hands of the people. All the resources to make this a reality are available, with the Internet acting as the medium. Since Gen Y is leading the Internet Revolution, I feel its only suitable for us to pioneer this digital evolution of money.

Due to the financial crisis in 2008, many people place blame on Wall St. for the mess we are in. That’s only scraping the surface. To get to the roots of the crisis, you have to go to C Street, N.W. between 20th and 21st Street in Washington DC, which is the headquarters of The Federal Reserve Board. The Federal Reserve has a monopoly on the creation of the dollar. They print all of the national currency for this country. They put money into the economy through interest-based loans. Here’s an example of a person getting a loan: 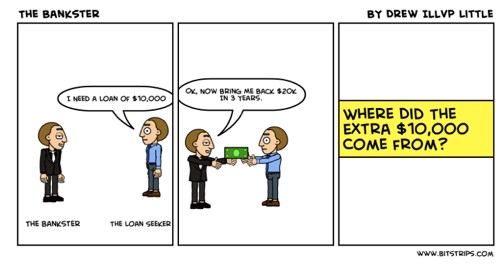 Banks create money out of thin air by loaning it into existence. So how do people pay back the interest to banks? That’s an easy answer. We must compete with each other to pay banks back, often in manipulative ways. If every dollar the bank sends into circulation has interest attached (which has to be paid back to the bank), then there's no way for everyone to pay off all debt incurred. You can only pay back the principal plus interest if you're able to get dollars from another source, be it a person or place of employment where individuals compete with each other to make ends meet. This breeds competition instead of collaboration. Furthermore, if you to default on your loan, the bank can take your assets.

This system also derives its value from scarcity. Ever wonder why we have the haves and have-nots? It is baked into the design of this “economic game.” This breeds corruption, crime, and many of the other socio-economic problems we have today. Why do you think the United States has the highest incarcerated population in the world? (Check out the documentary ‘The Money Fix’ for a more in-depth explanation.)

In 2008, the government came up with a solution to stimulate the economy. The stimulus package was intended to create jobs, and promote investment and consumer spending. Most people have not seen benefits from this solution. Then, the banks were bailed out to create more loans for small businesses. But where did the bailout money really go? The Fed showered billions of low interest loans to foreign banks!

Bottom line, I don’t see any positive change for the majority of the U.S. population from these solutions. It's about time we self-organize to create our own stimulus package that will not only empower ourselves, but release us from the chains of debt-based currency. How? Through the creation of mutual credit.

Let’s take the magic out of money and call it what it is: information. It's a system to keep track of how much someone takes from and puts into an economy. The exchange of dollars from hand to hand is just a way of keeping score in the economic game of give and take. In order to create US dollars, people have to obtain loans from commercial banks. All banks depend on others’ credit to support their creation of interest. Why do we freely give away this power of credit creation to a system that doesn’t have our best interests in mind? Why can’t we create our own system instead?

The alternative system is called mutual credit, but has other names such as complementary currency, community currency, or local currency. Mutual credit is the generic term used to describe a group of people who have agreed to create and utilize their own exchange medium. The purpose of every community currency system is to provide a means of payment that is separate from, and supplemental to, national currency, and that is created not in banks or government but in the community of members. What do the members have to offer one another in exchange for their goods and services? They have their own goods and services.

However, a mutual credit system is designed to transcend the limitations of barter. Like money, it provides a medium that allows two parties to trade even though one of them may have nothing the other wants. 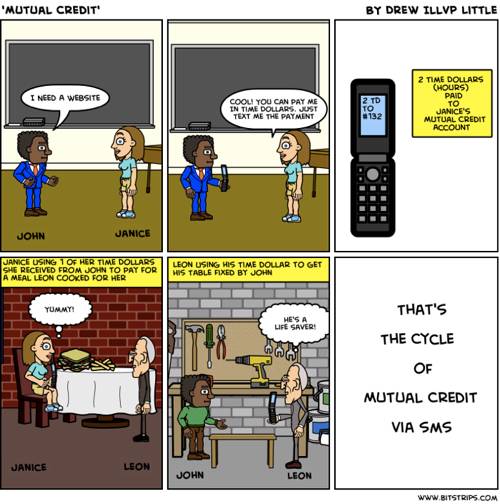 For example, suppose Janice develops websites and John wants one built, but has nothing that Janice presently needs. Using mutual credit, John can still get the website by giving Janice “credits” for the agreed price. Where does John get the credits to give to Janice? He creates them. Just as banks create dollars to give to someone who requests a loan, John creates the credits to pay Janice for the website. Janice can then spend those credits when she buys something from anyone else in the system. When John creates credits to pay Janice, he requires himself to accept credits from someone in the system at some future time in payment for his own goods or services. In this way, by making a sale, he “redeems” the credits that he originally issued.

According to Thomas Greco (author & thought leader in alternative currencies), in a mutual credit system, the members empower themselves to do the same thing that banks have done for years. Members create their own money in the form of credit but save the cost of interest, while distributing the money themselves according to their own needs. In this type of system, having a positive balance proves that value has been delivered to the community while a negative balance indicates that a member has received that much more from the community than she or he has delivered. A negative balance thus represents a person’s commitment to deliver that much value to the community sometime in the near future.

In our local communities, we utilize only a small portion of its resources and opportunities. Almost everyone has underutilized knowledge, skills, and time that can be used productively. Most businesses have underutilized machinery or capacity. Community currency is a creative way to enhance this untapped social potential. There are already over 2,500 different local currency systems operating in countries throughout the world, with some having been in existence 20+ years.

The Internet is the missing link to combine mutual credit and social networking into a powerful outlet for economic empowerment.

The Internet To The Rescue

Facebook and Amazon are two highly popular sites on the web. We use Facebook to connect and share with our friends and family. We use Amazon to buy and sell goods. However, these platforms are centralized. Meanwhile, an abrupt shift from worldwide web services to local-focused location-based ones is taking place. With the rise of services such as Foursquare and Groupon, local is the segment that is decentralizing many web services. This presents the perfect opportunity to implement mutual credit with social networking and localized web-based marketplaces. Let me give you an example of this in action.

Facebook has its Facebook Credit system. Imagine if Facebook used a mutual credit system instead of backing theirs with the dollar. They already have Facebook Marketplace. This will easily give members the opportunity to trade their goods and services. However, in order for this to work, they’ll need offices in every area where members are trading so they can act as facilitators to build trust for the mutual credit currency amongst members. It will indirectly build real world relationships and create additional marketing opportunities for their local advertisers. (Just imagine the ad-supported Facebook Bank/Mall.) They’ll also need to designate a different Facebook Credits system (i.e. SF Facebook Credits) for each area so the currency can continue to circulate locally (decentralized). The best example I can currently compare this scenario to is BitCoin. BitCoin is a peer-to-peer electronic cash system that’s been gaining some momentum on the web this year. However, Bitcoins are kept scarce and lacks a local-based approach to it which is exactly the problems facing the US Dollar.

A service like this needs a great deal of self-organization. But what are the steps to get this evolution going?

Educate people about the problems of our current economic system and the solutions such as mutual credit.

Create an open, efficient way to track the exchange of goods and services.

Gen Y faces significant challenges. We’re growing up in an era of rising student debt and economic uncertainty. According to the National Inflation Association, the real unemployment rate in America is now 22% and 60% of college graduates who are lucky enough to find a job, are receiving low skilled jobs where a college degree isn't even required. In fact, 70% of high school graduates who didn't go to college were able to get the same jobs as the average college graduate. A friend of mine asked me to imagine what would it be like if America had a youth-lead revolution like in Egypt and other areas in the Middle East. My response was simple: a revolution can be stopped, an evolution can not.