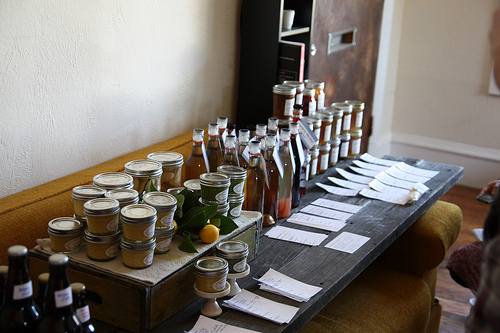 The recession spiked a resurgence of the ancient art of bartering, and now it seems as if savvy swappers are trumping sorry shoppers right and left. But not all swaps are alike, besides the fact that no money is exchanged. In clothes swaps, for example, nobody has to break a sweat creating the inventory; just clean out your closet and you’re in business.

But with food swaps, there’s a whole other ethos. For the most part, dedicated foodies bring handmade — and sometimes hand-grown — goods to trade with like-minded cooks, bakers, fruit canners, and sauce makers in a casual, social gathering.

“At a clothes swap, you bring what you don’t want; but at a food swap, you bring something you love and took time to make and want to share with other people,” says Oakland, California, food swap organizer Kendra Poma.

Poma — who has also held clothes, seeds, plants, and craft supplies swaps — staged her first food swap at her home in April and plans to do them seasonally. Her summer one is set for July 9 at a yoga studio in nearby Emeryville. Sign-ups started June 18. 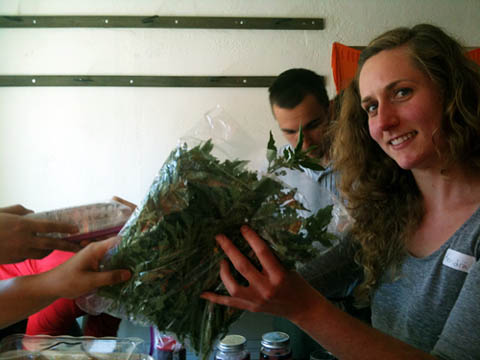 The former owner of a vintage clothing shop in Berkeley that closed in 2008, hit hard by the recession, Poma now makes earrings made from recycled bike inner tubes and sells them at local boutiques. “But I really consider my swaps my day job,” she says, “even though I don’t make any money from them.”

Some food swaps are food-specific, like a soup swap or baked goods swap. But the most popular seem to be swaps that offer an eclectic mix and use a format similar to a silent auction.

Participants bring what they’ve made (all one thing, or three or four different kinds of food) and set up on table with a sign-up sheet. For the first hour, people wander around checking out the different items and writing down their names and bids — what they’re willing to trade for items they like. The second hour is for the actual swapping. Having your name on the sign-up sheet doesn’t guarantee you will get it, but it’s a way to start the bidding.

To simplify the bartering, some swaps specify one item for one item, or mandate at a soup swap that everybody brings five quarts. But Poma leaves the negotiation up to the bidders: “If someone brings wild boar sausage from boar they hunted themselves and took three days to prepare, that might not be equivalent to your cookies.”

Some of her best trades have been for home-brewed beer, different relishes, scones, and water kefir, a fermented drink she had never tried — “things I would never make for myself.”

Poma has an e-mail sign-up list and also gets the word out on Facebook, Twitter, and Craigslist, as well as food, DIY, and urban homestead blogs and newsletters. She limits her swaps to 30 people. “It’s hard to have personal interactions with more than that,” she explains. At her spring swap she was mobbed with requests and had to turn people away. 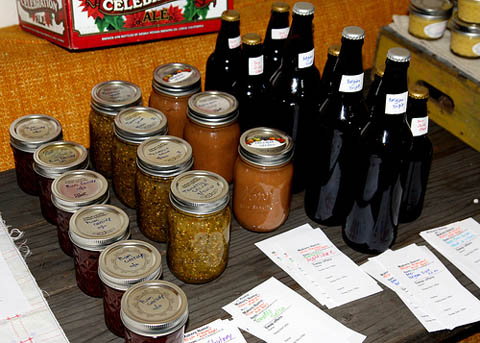 How to Do a Food Swap