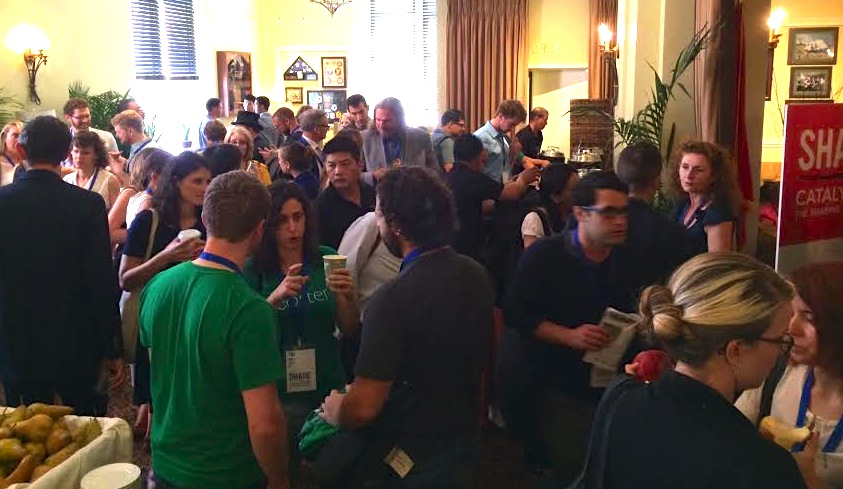 This week there was a meeting of sharing minds in San Francisco as Peers and SOCAP presented the first SHARE Conference.

The theme of the event was "Catalyzing the Sharing Economy." The theme opened up a lot of territory and participants ran with it, though this was not a cheerfest to celebrate how great the sharing economy is. SHARE was a hard-question, dig deeper, future-vision affair. The open-ended nature of SHARE also allowed other themes to emerge naturally. The most prominent emergent theme was about “access and equality.”

The need to get low-income communities—the communities who would benefit the most—engaged in the sharing economy was expressed repeatedly, from the plenaries to panels to many side conversations. As several speakers pointed out, low-income folks are good at sharing out of necessity. If the platforms were more broadly accessible, the sharing economy would be truly transformative. If it's only focused on helping the already well-off share, the transformational potential is lost. One of the most talked about moments was Janelle Orsi's opening plenary comments about how platforms should share the wealth with users in their actual ownership structure. The economic justice theme was the most surprising aspect of the conference, and the most delightful. 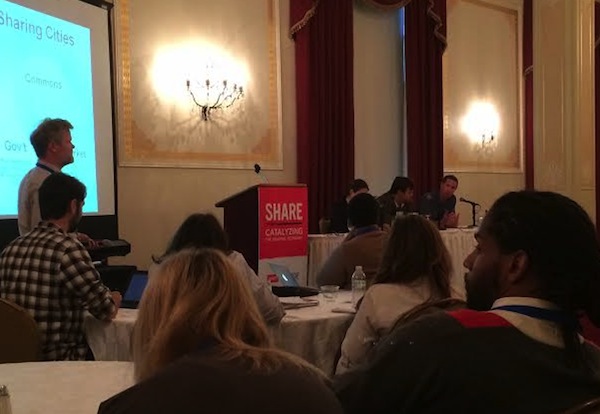 Shareable co-founder Neal Gorenflo had the opportunity to speak on two occasions, a panel and the closing plenary, about the Sharing Cities Network and how cities can be remade as commons rather than markets. The economic justice theme was especially prominent in the panel discussion he led, which featured almost a full hour of Q & A. The energy in the room was palpable.

As you’d expect, there were also discussions focused on startups, funding, regulations, the future of work, business models, and government. The sharing economy is the wild west right now and lots of people are getting in on the action. There were heated discussions about the relationship between capitalism and sharing and whether a huge business can be called a sharing business.

Perspectives were shared and opinions voiced and in the end, it came down to the fact that we’re all still figuring out what the sharing economy is. As Lisa Gansky pointed out, the movement is coming out of its infancy, moving into adolescence. It’s a time of self-reflection. The tricky part is that the sharing economy is growing so quickly that self-reflection is difficult.

There was a lot of brainpower at SHARE and many visionary thinkers, both on stage and in the audience. I hopped around from room to room, taking in as much as I possibly could and came away with countless insights, a great deal of clarification, and a few more questions.

My key takeaway is that the sharing economy is a mighty wave that can’t be stopped. But, it’s vitally important that we make sure that wave gives a ride to everyone, not just those who can afford to hop a ride on it. And SHARE might have catalyzed more action toward this. The weird confluence of tech, money, and economic justice made for a rarified atmosphere. It is at such odd intersections that big changes are often made. SHARE may go down as the moment when Silicon Valley started to think seriously about how to solve wealth inequality. 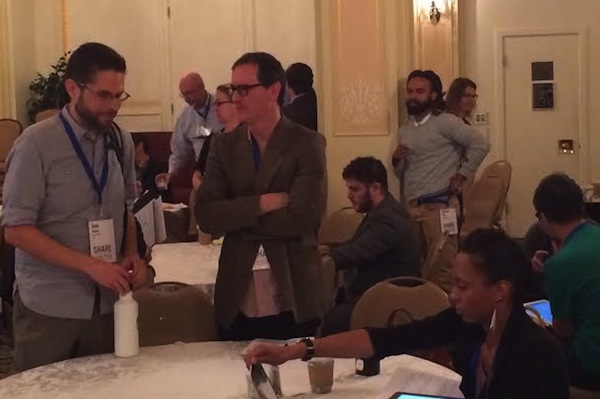 MyTurn's Gene Homicki in conversation with Alan P. Berger of Neighborgoods at SHARE.

Here are some of the many interesting opinions that were voiced, perspectives that were shared and points that were made at SHARE:

“The fact that we’re getting red flags from policy makers [etc] is a good thing. It means we're maturing and people are taking it serious enough to be concerned and engaged.”
—Lisa Gansky

“The core of the sharing economy is always about people, but to make it sustainable, we have to engage governments, regulators and corporations. Corporations who want to succeed will build shareable products designed to last.”
—Jeremiah Owyang

“We’ve entered the urban century.  We’re now a connected urban species. Our future will be decided in cities. All the while city governments must provide more services on fewer and fewer resources. In this context, the sharing economy is a promising urban solution. It has the potential to unlock idle resources for public benefit, broaden access to resources, and dramatically reduce resource consumption.”
—Neal Gorenflo

“It's not about innovation, it's about humanity and bringing us back to where we came from.”
—Shervin Pishevar

“How are we going to harness the sharing economy to grow the wealth of the 99 percent? We're creating a new economy but we're continuing to flow wealth up to the 1 percent. How do we create platforms that are not going to recreate this? When you do create platforms where people can buy and share with each other, it grows your wealth. When wealth flows, it grows.”
—Janelle Orsi

“I think capitalism is kind of working here…competitors can come into the market and offer the creators of value a better deal. … [A]s much as I believe in democracy, it's actually a hard model to innovate in. We'd want some mechanism to reward outliers, people who don't command the support of the whole group. We want those people to be able to get something in the market. If we require a direct, democratic vote, that may not happen.”
—Brad Burnham 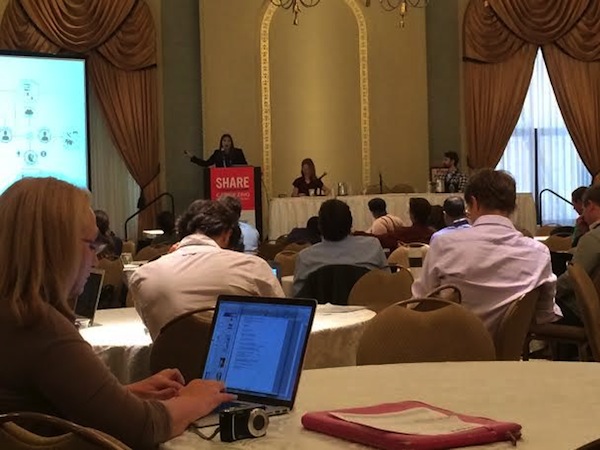 “There are so many laws we need to change, tens of thousands of them. Think of yourself as policymakers. Add to your to-do list to change at least one law.”
—Janelle Orsi

“There’s a very small percentage of people who are against the sharing economy. There’s another group of people who are supportive. But, most people just don’t know enough about it to have an opinion either way.”
—Matthew Desario

“It’s very easy to see sharing become a brand marketing strategy for companies. What are the questions they should be asking to make sure equity and social justice are being talked about? Sharing is hot now, what do we do while it’s hot.”
—Audience member

“There’s a lot of share-washing going on. When you're looking at a sharing company, ask yourself how it’s different than any other company.”
—Yassi Eskandari-Qajar

“It’s really difficult for me to define anything right now because everything is moving ridiculously quickly.”
—Audience member

“Private helicopter flights are what I’d like not to do with the sharing economy.”
—Allison Cook

“In a lot of these [makerspaces], the depth and knowledge is not only life-changing, but world-changing.”
—Praveen Sinha

“The city is the middle actor. It’s not the top down and it’s not the bottom up. … It’s important for cities to take stock and connect the dots between things that are already happening in order to make a holistic story.”
—Corey Zehngebot

“Creating an entity that reduces income inequality is how you can catalyze the sharing economy.”
—Arun Sundararajan 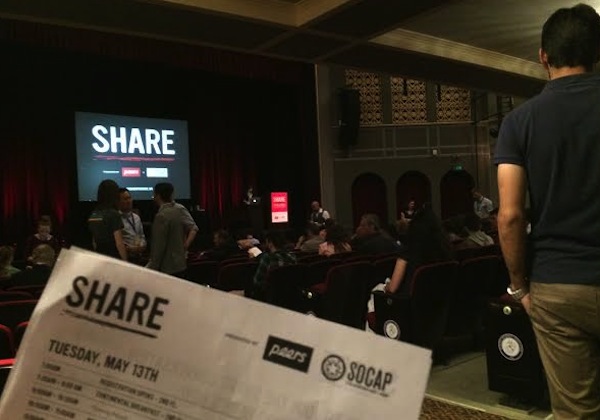 “We’re at a point where we need to engage our governments more directly in order to get something done. … We need to stand up for what we actually want but we need to do it in a coherent manner.”
—Jesse Biroscak

“This hyper-networked ecosystem where people are exchanging ideas and capital is really based on a deep seeded affinity. … A life well-lived, for most people, is generally measured by the strength of the ties to a community.”
—Tim Freundlich

“Can sharing companies be part of the federal spending? The opportunity here is to spend as much time thinking about equality [etc.] now, on the front end, before we make policy, rather than the back end.”
—Greg Nelson

“We at Airbnb and Peers think the sharing economy should become a dominant global economic model.”
—Douglas Atkin

“There are ways that low-income communities have shared that haven’t been the stranger to stranger connection.”
—Nikki Silvestri

“It’s hard to define civic engagement…it’s a state of mind; people feel like they can use their expertise and skill to make a difference. At the fundamental level, civic engagement is about relationships.”
—Catherine Bracy

“We need to grow entrepreneurs from the communities we’re trying to access.”
—Audience member

“What we really have to all work on…is how to figure a theory of economic dignity for the vast majority of us.”
—David Rolf

“What is the goal? It’s not about making a huge exit, for me. It’s about contributing good things, maximizing the impact I can have on the world, and doing things I love.”
—Juho Makkonen

“How do you quantify happiness? Measure the social results of your program? The stories are heartwarming but… unless we can bring numbers, it doesn’t mean much.”
—Panelist