Coworking as a Business: Which Model Is Best? - Shareable
Skip to content 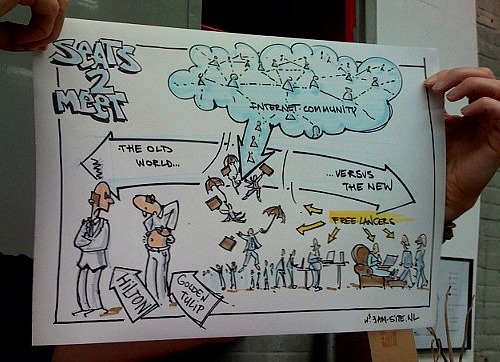 "The general consensus is that operating with the intent of making a profit is nearly impossible to combine with true organic growth of the community. But this doesn't mean profit can't be a byproduct or a parallel goal." — from the Coworking Wiki

Most coworking advocates fall into one of two schools of thought on this topic: those that believe coworking is best when it exists as a non-profit, and those who believe coworking can (and should be) a profitable business. The coworking community demonstrates that both (and many hybrids in between) are possible.

Coworking As A Non-Profit

The thing that sets coworking apart from all other styles of working is that it has the welfare, success, and ultimately happiness of the members as its most lofty goal. The community is the most important asset, and everything else–the space, location and amenities–are meaningless if the community is absent. One of the most attractive reasons to choose the non-profit model is the ability to let the community evolve naturally.

Members are attracted through word of mouth or community events, rather than mass-marketing campaigns. Community managers encourage people to try a free day before deciding whether or not it's right, without feeling the need to "close the sale" because the rent is due. The space owner feels less inclined to oversell seats because of the revenue it brings, and members don't feel like they have to arrive before dawn to get their favorite seat.

Coworking spaces that operate as a non-profit often do so because a) they don't care about getting huge b) the owners aren't interested in making a salary from the membership alone, or c) they've got outside investment. In some cases, the coworking stars align, and a for-profit or government investment makes its way to the right catalyst. These situations may or may not come with strings attached, so their pros and cons must be weighed carefully before pursuing them.

Coworking As A For-Profit

The "starter" mentality permeates the coworking community. Those drawn to this collaborative environment are unafraid to go from idea to reality in weeks rather than years. While creativity provides the initial rush of satisfaction, the idea of getting paid is never forgotten, and space catalysts or owners are no exception.

What troubles some in the coworking community is that creating a coworking space with the sole purpose of making profit can drive the focus away from the coworking values of collaboration, community, openness, accessibility, and sustainability. "Coworking spaces that fully embrace the value of community are not owned by anyone," writes the founder of C4 Workspace in San Antonio, Texas. "They may be funded by individuals and other sources but they are “owned” by the community." One can't just offer desks and Wifi, call it coworking, and wait for the money to roll in.

One way to avoid conflict between the two goals is to build patience into the business plan. Catalysts should not put themselves in a situation where the space "must" be profitable within a certain period of time. Future space-owners should be honest about how long they could stay afloat if it takes 6 months, 12 months, or 18 months to build a decent sized community. If the math doesn't add up, keep the day job, and refer to the previous section.

While it might be easy to equate "profit" with the cut-throat individualism that typifies the corporate world, space owners shouldn't be afraid to make money from a business that requires hard work. Instead, many look for ways to provide additional, valuable services to both the freelancers in their coworking community as well as the telecommuters, small business owners, and creatives of the community at large. Workshops, camps, classes, and mixers bring people together and make them better at what they do. Better yet, all of these things can exist within the community without defining it.

On his blog, co-founder Alex Hillman writes that the point of creating Indy Hall as a not-just-for-profit was to "future-proof" the community for its current members as well as those that would come later. After all, one of the five values is sustainability, which means designing a community that will remain in-tact as long as the members need it, not necessarily as long as the owner or manager needs it. By keeping the well-being of the community front and center in the decision making-process, space catalysts can avoid pursuits that could cause it to drift from its original purpose.

Does your coworking community follow one of the above models? If not, what makes it different? Which do you think is best for the members?