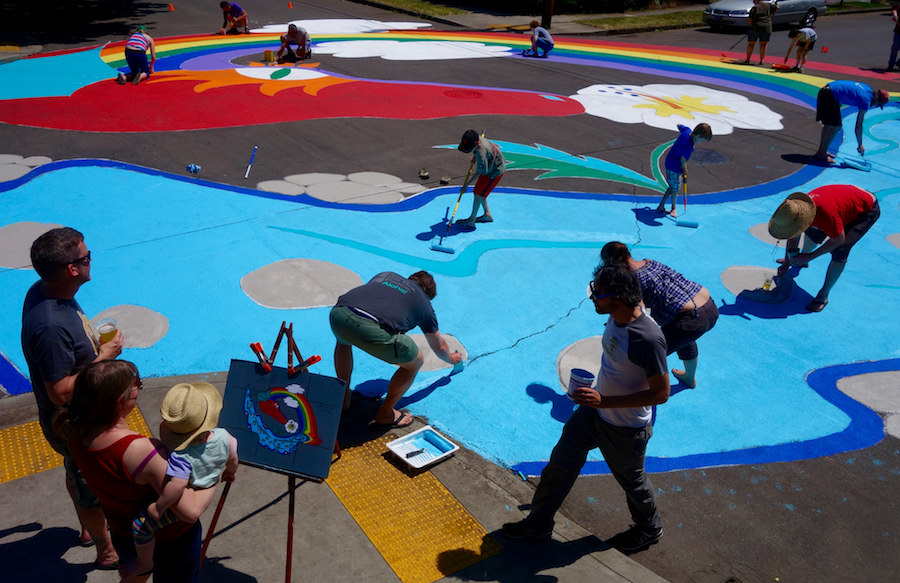 In 1996, Portland, Oregon was rocked when two young girls were killed by a car while crossing a road to get to a playground. The tragedy led to the creation of the first Intersection Repair project, where neighbors painted and reclaimed the street for their community.

These days, City Repair, the organization behind Intersection Repair, is an internationally-renowned, city-sanctioned, pioneering placemaking project helping communities transform streets and neighborhoods into vital, human-scale public spaces. The City Repair extended community has done over 350 placemaking interactions and they field calls from people around the world hoping to learn from their experience.

Shareable connected with Ridhi D'Cruz, associate director of City Repair, to find out more about community-level placemaking, the big picture vision for the project, and how the organization went from breaking the law to gaining city officials as allies and advocates.

Shareable: City Repair is best known for its first project, Intersection Repair. What has the organization expanded into?

Ridhi D'Cruz: The crux of the work, more than painting the streets, is to enable people to have power in their place. In 1996, [the first Intersection Repair] was a symbol that the community was not going to let their kids get mowed down. We have power and place and we will not have to jump through hoops of bureaucracies that don’t really know what happens in this place and get to govern it from far away.

That was part of the thinking, but the neighbors wanted to do it in a way that wasn’t confrontational but, rather, proactive and open to collaboration. 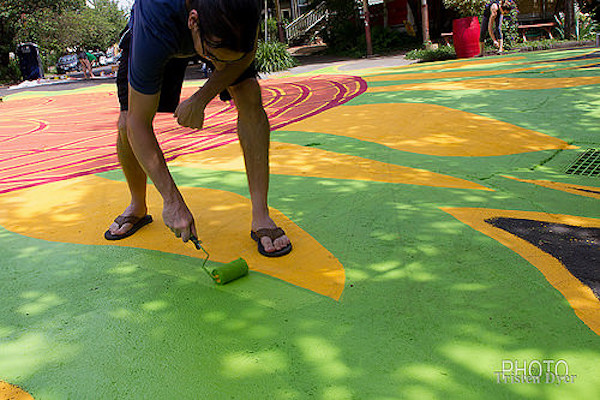 Beyond painting streets, City Repair is about bringing together people and place. Photo: Tristen Dyer

How did you develop relationships with local government officials?

Initially, the Portland Bureau of Transportation (PBOT) didn’t like it. It wasn’t legal and, when someone transgresses the law, they don’t like it. The cops were called and luckily, because of trial community-building initiative, the policeman who was in charge of that area knew the community members. He looked at it and said, “I’m going to stand by you. I’m not going to arrest anyone.”

That was one pivotal point of connection. Then, the neighbors were really proactive again and compiled a proposal with pictures and testimonials and went before city council. One of the city council members looked at the proposal and said, “This is amazing. Look at all these goals this initiative is fulfilling. It’s creating public safety and other health measures and bringing people together. These are goals that the city is striving for it’s often hard to know how to implement them.”

The proposal was approved and formalized into an ordinance in 1996. Since then, the neighbors repaint every year or change the design.

In 2000, we began expanding into different sites and taking on different initiatives. Once people realize that they have power and place, that’s just an mechanism for all kinds of creative expression to flow out of.

Each intersection painting is a reflection of what people in the neighborhood want to see there. They often are imbued with local stories. One gives props to the craft brewing tradition in this area, another one is a memorial for an elder who passed on. When she passed on, a tree on her property fell, so they painted the tree. There’s a rainbow dragon that is also a memorial, there’s a Spongebob Squarepants-inspired intersection painting in honor of a wonderful child who is wheelchair-bound.

That’s just the intersection painting. We’ve seen this process of community-building unfold into all kinds of other initiatives. It’s one of those mechanisms that brings people together so emergency preparedness organizing happens, community policing initiatives happen, pollinator corridors happen—it’s just whatever is relevant to that community.

That’s what makes our model so transportable. We’re not advocating for X,Y and Z.

The Intersection Repair model includes not just the painting, but the activation of public space. The intersection becomes likened to a square. By bringing back gathering spaces within the urban grid, we’re giving people a container for social engagement to unfold.

I understand that now there’s a City Repair advocate working within the city of Portland?

Yes, our good friend Greg Raisman. He’s a traffic engineer who has worked with us for over a decade. He absolutely loves his work and is a joy to work with because he gets it. He knows that all this permit language is not accessible to everyone. He knows that it’s not always easy for community members to understand all of it.

He works with each of the sites that are doing new designs through a kind of hand-holding process we devised together. We have community meetings where he gives everyone feedback on their design, not just from a PBOT perspective, but just from experience. For example, he might say, “That looks kind of complex. Trust me, you don’t want to be doing that much fine detailing on your intersection because it’s going to be backbreaking work on a hot day.”

When we field calls from across the nation, and sometimes internationally, he’s the person I put them in touch with when they have questions about liability and insurance because he knows how to talk their language. When it’s coming from our nonprofit, it can seem pretty radical, but when it’s coming from someone who is like them, it facilitates their comfort. They hear that nothing bad has happened, and there’s only been one insurance claim in 20 years, and that you can add a friction additive so the intersection is not slippery.

He had us amend our ordinance to include mid-block painting. Now, you can paint on any part of the street, not just intersections. He also helped us move forward an initiative where city council proclaimed June 17 to be for community kiosks. People can now install small kiosks, including Little Free Libraries, a poetry post, or a little structure that dispenses newspapers on their block without a permit.

Through the years, our work has gotten easier and easier as we’ve demonstrated success and continued to be collaborative with PBOT. 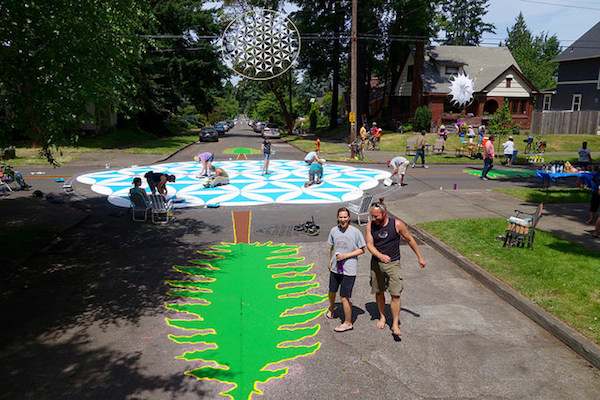 "[E]very possible problem that we face can be solved at the local level if we are connected with each other." -Ridhi D'Cruz. Photo: Greg Raisman

How has the Portland's involvement changed the City Repair?

We owe the foundation and a bedrock for collaboration and understanding to that first group of neighbors. Breaking the law, and then amending it, is no easy task. Now that that precedent has been set, it has allowed for so many different partnerships and for a synergy to unfold. And it continues to strengthen.

When we testified at city council last year about the proposition and amendment, all of city hall was smiling at us. We’ve been around a long time. They know we’re a little bit wild and that we’re not just sitting on our haunches—that we’re always pushing the edge.

Our new initiative for the coming months is to take on pretty large plantings in parking strips and to focus on pollinators. We keep reinvigorating [the organization] so that our public spaces become reflections of the spirit that each community has to offer. Especially as things are changing pretty rapidly now, it becomes more important to set the cultural tone.

What’s the big picture vision for City Repair? If everything goes amazingly well, what would you and the City Repair team like to see?

The big picture has always been, and continues to be, that we set in motion such a powerfully catalytic community-building mechanism that it rebirths the modern village where we are no longer isolated. As individuals, as neighborhoods, as a culture, and as global citizens, every possible problem that we face can be solved at the local level if we are connected with each other.

We don’t want to go back centuries in time to some romanticized version of indigenous communities. We want to bridge that village spirit into our present-day inhabiting of this world.

We’re not alone. There are so many good initiatives out there. It continues to be humbling when you meet people involved with initiatives across Portland and the world. That’s why they call it a movement. We’re part of something so much larger than ourselves and it feels like an absolute gift to be alive in this time.