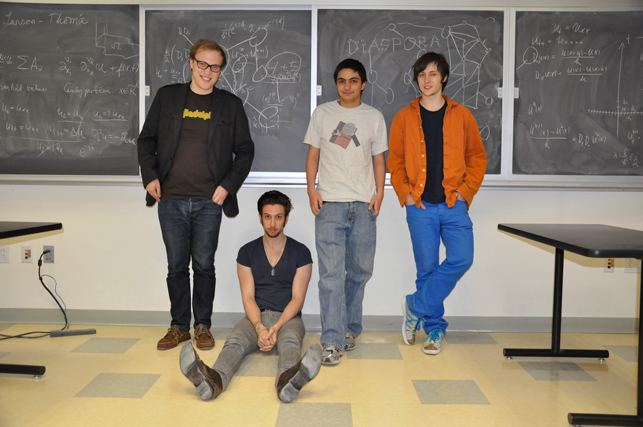 Can four college students take down Facebook? If there was ever a time to try, it would be now.

Neal Gorenflo discussed the growing Facebook backlash earlier this week, and offered his wish list for an alternative social network. Without a credible alternative, however, a lot of us are reluctant to take the plunge and cancel our accounts. With over 500 million users, Facebook isn't merely ubiquitous–it's the connective tissue that binds you to your friends, family, professional contacts and once-forgotten acquaintances. It'll take a compelling challenger to take down Facebook. Four NYU students are stepping up, announcing Diaspora*, a fully open-source, privacy-minded alternative.

The response in the media and online has been stunning. Demonstrating the degree of anti-Facebook sentiment, Diaspora*'s Kickstarter page has raised over $100,000 in the two days since the project was profiled at the New York Times. As of this writing, "how do I delete my Facebook account?" is Google's fifth-highest search suggestion to the query "how do I". The uproar has reached such a mass that Facebook, which often ignores user complaints, has called an all-hands meeting to discuss privacy policies at 4:00pm this afternoon.

Despite all of this buzz, a number of tech pundits are skeptical about the Diaspora project. Cnet's Matt Asay is dubious that a solution which requires deployment on an individual's server will gain the critical mass of users necessary for social networking services to be useful. Asay points to identi.ca, the privacy-minded Twitter clone that has failed to catch fire outside of coder and hacker circles. Wired's Epicenter blog is also skeptical, citing a study that states that only users 35-and-over care about Facebook privacy concerns. (Though the Diaspora* developers' youth seems to undermine such claims.)

As a Facebook user who is strongly critical of the company's recent policy changes, I'm optimistic and encouraged by the overwhelming response to Diaspora, and see much potential in an open-source alternative to Facebook. Still, I have some questions and concerns of my own: Will a paid hosted version a la WordPress.com prove to be a sustainable business model? Will the know-how necessary to set up and host your own Diaspora* seed turn off non-technical users? To what extent will each deployment interoperate with one another–will people on one seed interact with people on another seed seamlessly, or will there be incompatibilities?

Achieving the necessary critical mass of users is another concern: considering the difficulty Google has had launching their own social networking service Buzz, with an already massive built-in user base, it's clear that any competitor to the Facebook behemoth has a steep uphill climb ahead of it. It will be essential for the development community around Diaspora* to follow WordPress example and make a concerted effort to evangelize about its ease-of-use to non-technical users. There are already plenty of open-source social networking platforms for geeks; what we need is an open-source social networking platform our Moms will feel comfortable using.

It's difficult to answer many of these questions at this point–the project is very early in its development cycle–but the discussion and buzz around Diaspora* remains exciting, no matter the ultimate result. Certainly, other open-source social networking projects exist, such as Elgg and Drupal, a popular content management system which has been adopted more as a publishing platform than for its social networking features. But these other projects have failed to ignite the popular imagination or attract media coverage in the way that Diaspora* has over the past few days. This demonstrates that there is a growing public sentiment against Facebook and its policies, as well as enthusiasm for a distributed, open-source alternative. For privacy advocates and open source fans alike, this can only be a good thing.

Learn more about Diaspora* here, and donate to the project on Kickstarter.