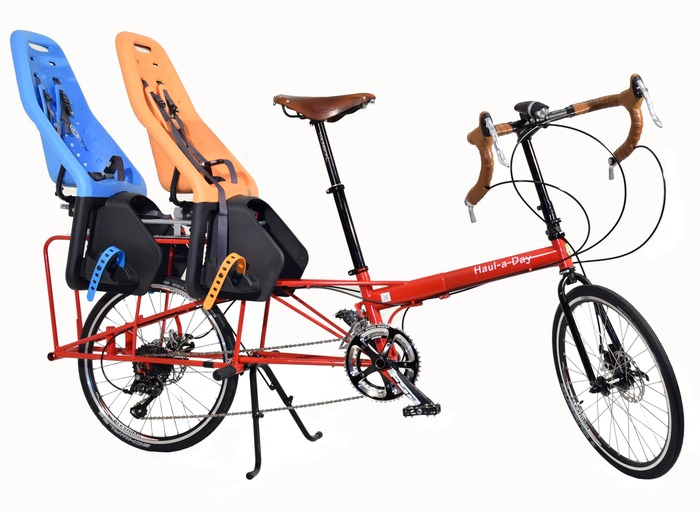 After meeting their initial $45,000 Kickstarter goal in a mere 28 hours, the father-daughter team at Bike Friday is now on track to hit their $120,000 super-stretch goal by the end of their campaign on December 20. All of the funds are earmarked for further development of their new Haul-a-Day cargo bikes so that people who really want to go car-free can do so with greater ease.

What makes the Haul-a-Day different from other cargo bikes? A few things, actually. It is:

The Haul-a-Day was originally designed for Shane MacRhodes, Bike Friday co-founder Alan Scholz's friend. MacRhodes leads one of the Safe Routes to School programs in Eugene and is a big bike advocate. Naturally, he thought a cargo bike would be a nice addition to his fleet to help him lug around traffic cones, a bike pump, tools, and other things. MacRhodes loved his new ride so much that he spread the word on his blog and others started clamoring for Haul-a-Day bikes of their own.

No stranger to bike innovation, Scholz designed the Burley Trailer in the early 1980s to carry his two daughters around when they were kids. These days, Scholz continues to work at Bike Friday and has built most of the Haul-a-Days himself. The Kickstarter funds will allow the company to expand production, develop electric-assist technology, and a child's trailer hitch attachment. You can order one here.