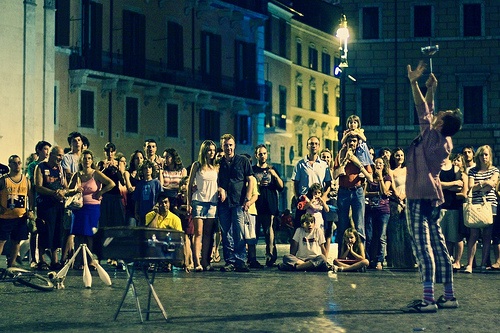 It’s still early on a cold March morning that threatens rain, yet Rome’s Piazza Navona teems with life. Young men deliver boxfuls of wine, vegetables, San Pellegrino and other provisions to cafes that ring this famous square, as groggy cooks throw back their first espresso of the day. Early-bird tourists, pointing cameras in every direction, document the square and its famous fountain for folks back home.

A street-sweeping vehicle bears down on a cluster of college students as it readies the piazza for another day in the city renowned for la dolce vita, the sweet life. The noisy machine swerves away at the last second as University of Notre Dame architecture professor David Mayernik, standing his ground, narrates the architectural history of the piazza — which he interweaves with tales of Rome’s piety and peccadilloes.

The square’s oval shape testifies to its origins as a stadium for chariot races and jousting tournaments. Pope Innocent X, who enlisted Baroque master Francesco Borromini to design the Saint Agnes church overlooking the piazza, had plans to move the Vatican residence next door — which, according to gossip, was the wish of his widowed sister-in-law, who seemed to wield more power around the papal court than he did.

"More than a nice spot for a stroll," Mayernik tells his architecture students, "Piazza Navona is a theater, a world in miniature that represents creation, salvation and exploration — a dream of what the world could be. 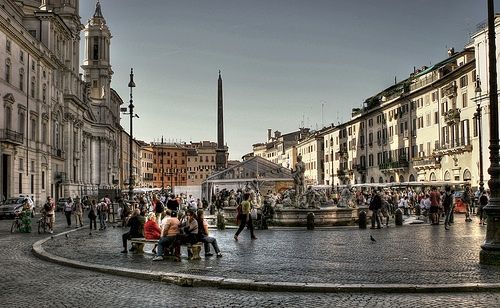 "People immediately are drawn to it," he continues, "even if they don’t know why. Americans instinctively know what to do in a piazza like this, though it’s not part of our culture."

As a few rays of sunshine break through the clouds, he dispatches his students to sketch the square in their notebooks, offering this advice: "You can read the landscape for its meaning — either in the parts or the way they have been stitched together through the years to create a whole. Look for the multiple readings, which is one of the things, I believe, that makes this place great. If a puzzle is too easy, it’s less interesting. Look for the connections that aren’t apparent at first."

I chat with one of the students, who plans to become a real estate developer. "At first I would walk around Rome thinking how pretty everything is," he says. "Now I see it has a deeper meaning. But how do we create this kind of meaning in projects that are being designed today?”" 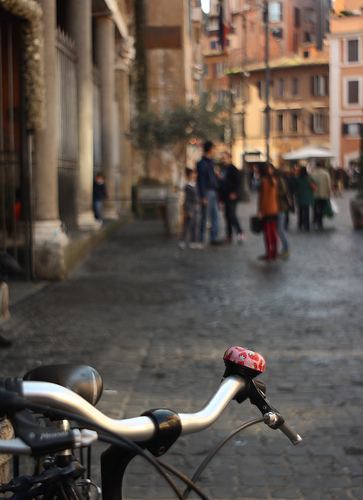 As I rejoin Mayernik in front of the Fountain of the Four Rivers, with its huge Neptune-like figures representing the Ganges, Nile, Danube and South America’s Rio Plata, he anticipates my question. "The students always wonder what to do with this when they get back home.

"But I really believe," he says, sweeping his arm past the church and cafes, "you could re-do Piazza Navona in the U.S. — not by doing it just the same but by looking at why it works. This piazza includes civic buildings, not just commercial ones. It attracts a variety of economic classes who feel comfortable here. Study how tall the buildings are. Look at what materials are used. And then let some creative people loose to do it."

In his book Timeless Cities, Mayernik, an associate professor at Notre Dame’s School of Architecture as well as an architect and painter, muses about what might happen if the thousands of Americans visiting Rome each month returned home fired up about improving their own communities. "How much better it would be if these urban tourists came home and went about lobbying for better neighborhoods, accessible and beautiful public space or some kind of limit to sprawl — and then even began thinking about what their cities meant, or should mean?"

A sense of place

What can a 3,000-year-old city possibly teach us about life in the modern world? Well, if we can’t learn anything from Rome, where can we? It is, after all, the Eternal City — an Imperial capital of 1 million at the time of Christ, which dwindled to a village in the Middle Ages and then bounced back to become an epicenter of religion, culture, food, glamour and tourism today. 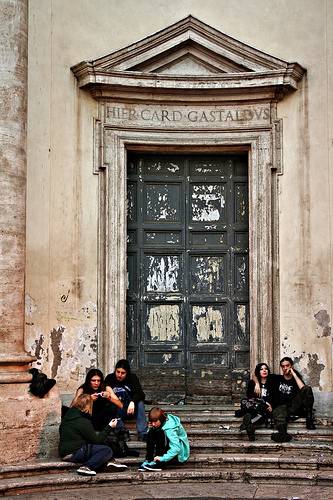 What is it about the place that seizes our imagination — that renders it holy or unforgettable to so many people? That question slips into the mind of most visitors, even non-Catholics going back as far as the German philosopher Goethe, who declared, "In Rome I first found myself," and the English poet Lord Byron, who called it "the city of my soul."

The answer lies in the exhilarating sense of the past that surrounds you, layer upon layer all jumbled together. You can watch people lay flowers at the spot where Julius Caesar was cremated, stare up at the balcony where Mussolini delivered blustery speeches, admire Michelangelo’s Christ the Redeemer sculpture in the Santa Maria sopra Minerva basilica, tour a Roman temple consecrated 1,400 years ago as a Christian church (the Pantheon), stroll lanes trod by centuries of pilgrims and then indulge in café society on Via Veneto just like Fellini’s characters in the 1960s film La Dolce Vita.

All this history can be experienced on foot, without breaking a sweat, between a lunch in the Jewish Ghetto and cocktail hour at the Caffé Greco — where you can then raise a glass to toast the lingering ghosts of Keats, Shelley, Rossini, Mendelssohn, Richard Wagner, Mark Twain and Buffalo Bill.

"Romans understand the idea of ‘spirit of place’ very literally," says Professor Steven Semes, academic director of Notre Dame’s Rome architecture program, "and I must say that in the evening around 6 p.m., when all the church bells start to chime, you’d have to be pretty hard-crusted not to agree with them. At that moment it seems that all the people who ever lived here are still here now. That’s why they call it the Eternal City."

Rome offers many lessons not just for good architecture but for a good life. The importance of family, friendship and food in daily affairs. A deep sense that sacred and secular naturally coexist with no dividing lines. The belief that all of life should be approached as a work of art, not simply as tasks to rush through on the way to the next thing. And the whole-hearted embrace of complexity, which is what makes this city alluring, holy and pleasurable.

All these ideas come gloriously to life in Rome’s piazzas — the Italian word for "square," but which carries greater depths of meaning. In a city so densely populated, piazzas serve as the front yard, back yard, playground, community center, market and town common all rolled into one. Some are world-famous landmarks, such as Piazza Navona and the Spanish Steps, while others are simply wide spots in the street where neighbors gather.

Saint Angela Merici, founder of the Ursuline religious order, counseled her followers to "be like a piazza." For Tracey Lind, dean of the Trinity Episcopal Cathedral in Cleveland, that means being "open, gracious, hospitable, playful, restful and engaged in the world." 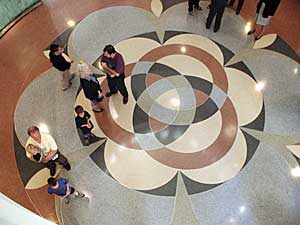 Saint Angela’s teachings motivated Lind to launch a project called Trinity Commons — the most ambitious new development for her neighborhood in decades — that brought a coffee shop, independent bookstore, Ten Thousand Villages fair trade store, art gallery, labyrinth and public square to the grounds of Trinity Cathedral (left), which itself welcomes anyone inside to pray, reflect or relax.

"Last year we had 80,000 people visit for public events," she enthuses. "Like Italian piazzas, we are a place for conversation, commerce, worship and celebration."

What about the U.S.?

Mark Lakeman, an architect in Portland, Oregon, returned home from Italy excited about the idea that every community needs its own piazza. But how could that happen in his own largely blue-collar neighborhood without tearing down someone’s house or radically redesigning existing streets?

Lakeman and some neighbors put their heads together, coming up with an innovative plan for the corner of Southeast 9th Avenue and Sherritt Street. They began by setting up a portable teahouse, which drew many dozens of people out of their homes on Monday nights to mingle. The next step was to paint the pavement in vivid colors, sending a clear message to passing motorists that this was not your ordinary intersection. As social activity began to move out into the street, drivers and pedestrians instinctively learned to share the space, thus its name: Share-It Square (pictured below). 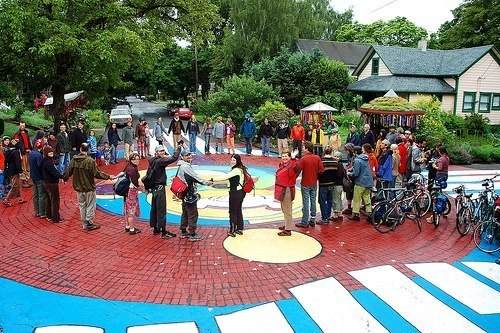 But what did the neighbors think? Challenging the dominance of automobiles on American streets is a brazen act, especially to older people who came of age in the car-crazy 1950s. Lakeman worried about angry opposition arising to quash the experiment, until talking to Brian Shaw, who lived right at the corner.

"Brian said that his father had fought in Italy during World War II and would tell stories about how, when they liberated a village, everyone would automatically gather in the piazzas to celebrate," Lakeman recalls. "He said his dad always used to sing an Italian song with lyrics saying, ‘if you don’t hear voices in the piazza when you wake up in the morning, then you know something is wrong.’

"Something is wrong with too many places in America today," Lakeman says.

Projects similar to Share-It Square have now popped up at 19 other Portland intersections, with at least a dozen more in the works. Lakeman and his collaborators went on to found City Repair, a nonprofit organization promoting a whole host of initiatives to help communities create new public spaces. And these ideas are spreading across the continent with new "piazzas" sprouting in at least 15 cities from Rochester, Minnesota, to San Diego to Toronto.

Like Lind and Lakeman, I was thoroughly captivated by the spirit of piazzas. In a week of wandering through Rome, I again and again found a rare sort of peace and contentment in these squares. They offered not just refuge from the chaos and noise for which Rome is notorious, they opened an entrance to someplace special inside me. Watching water spout in a fountain, looking up at an eye-pleasing church, relaxing at a café, soaking up the human pageant unfolding all around, I felt intensely linked to the flow of life.

Back home in Minneapolis, a city quite unlike Rome with uniformly straight streets and great expanses of green space, I claimed my own sacred spot — a hilltop in a nearby park that on warm or sunny days attracts a lively cross-section of humanity. Sitting there beneath a towering cottonwood tree — watching the lovers stroll by, hearing children shout, running into friends — I feel connected to all of heaven and earth.